In Surfside, an Israeli medic lends expertise and navigates an unstable rescue site

‘Our brothers and sisters are here. We’re here to help.’ 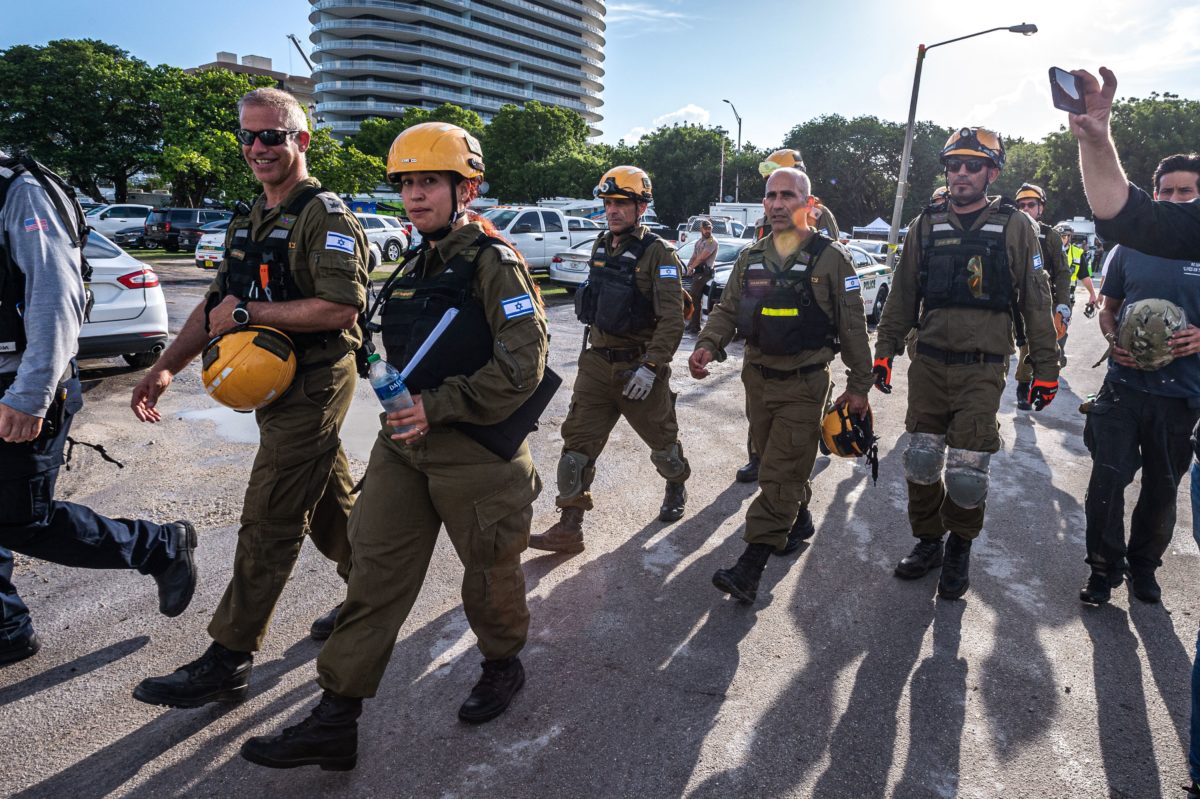 Members of the Israel Rescuers delegation gather upon their arrival in the area near the partially collapsed 12-story Champlain Towers South condo building in the city of Surfside, Florida, on June 27, 2021.

For Israeli medic Dvir Dimri, who has spent several days and nights shuttling between the pile of rubble at Champlain Towers South and a nearby private home trying to console grieving Jewish families, the tragedy unfolding in Surfside, Fla., hits close to home.

Dimri and his wife spent four years teaching at a Jewish day school in Chicago from 2012 to 2016 and feel intimately connected with the American Jewish community. And while he never planned to work as a teacher in America, Dimri said his time at Hillel Torah North Suburban Day School, near Chicago, was an “experience that changed my life.”

Now, Dimri, 37, part of a team of 10 volunteers from the Israeli medical-relief agency SSF-Rescuers Without Borders, is using his familiarity with the American Jewish community to help the team navigate different social norms while assisting in relief efforts.

“Our brothers and sisters are here. We’re here to help,” Dimri told Jewish Insider, acknowledging the number of Jewish residents — by some counts close to 30 who remain unaccounted for — of the partially collapsed condominium building. The survivors Dimri is searching for, he said, are “not only human beings, not only Jews, they are friends of friends, family of friends.” As of Wednesday evening, the number of confirmed dead had risen to 18, after the bodies of two children were recovered.

Dimri, CEO of Karta Investments, an Israeli company that invests in real estate and construction, left his family and work to participate in the ongoing emergency response at the towers north of Miami Beach. It is his first such overseas rescue mission; members of the SSF team have previously volunteered in the aftermath of the 2010 Haiti earthquake and the 2004 Indian Ocean tsunami.

The Israeli volunteers were assembled with little notice Sunday afternoon, during a Jewish fast commemorating the breach of Jerusalem in 70 AD. They were given only four hours to travel to Ben Gurion Airport and receive a COVID-19 test before boarding a flight early Monday morning.

After fasting all day Sunday, Dimri left for the airport just as his family was sitting down to eat the fast-breaking dinner. He stressed the importance of modeling behavior for his children: “I think this is part of the education that I give them… the best education I can give [is] to give my values to my children.”

As the Surfside community gathers, with hope fading every hour that survivors will be pulled from the rubble, Dimri and the other Israeli volunteers have sought to console the grieving families and assure the survivors and families of the dead and missing that Israelis are united with them in solidarity: “We are one nation, we are with you,” Dimri said. As a small gesture of support, SSF sent gifts with the volunteers to distribute to children affected by the collapse.

During the days tirelessly working on the pile of debris, Dimri has little mental energy to focus on his surroundings or the emotional despair caused by the tragedy; he concentrates solely on the task at hand. “As in the army… you put all the emotions on the side,” he said.

Between shifts, Dimri thinks about the significance of his efforts. Jewish tradition teaches that every soul is a world, which compels the immense sacrifices Israeli volunteers are undergoing to help in the search-and-rescue mission. “If you understand that you are following a value that life is above everything, and that the respect of bodies is above everything, so this is why you stop everything, you put all your money, all your business on the side, and you help to come to work, and you come to do your best.”

Previously Dimri responded to other tragedies, including the Versailles Wedding Hall disaster, a building collapse in Jerusalem in 2001 that killed dozens of wedding guests.

This year has been an eventful year for Dimri: one year ago, almost to the day, he was the victim of a boating accident in the Sea of Galilee, and has since undergone three surgeries. A year later, he is helping others.

The continuing rescue operation in Surfside is painstakingly difficult because the segment of the Champlain Towers South that is still standing is unstable. While the likelihood of finding survivors is greater near the standing portion of the building, team members said, searching the area is dangerous because engineers fear the remaining tower could crumble. Dimri said architects were continuously analyzing the structural support of the south tower and were advising rescuers about safe routes for search tunnels.

Dimri explained the Israeli delegation is focused on three missions: saving survivors, affording dead victims respectful treatment in accordance with Jewish tradition and showing support for the American Jewish community and the wider community affected by the tragedy.

The 10-member team is staying at a nearby private home, praying at a local synagogue and offering communal support in addition to technical expertise. When they are not searching for survivors, the SSF members are helping to console families: “We try to help them, try to speak with them,” said Dimri.

The Israelis bring experience in rescue missions across Israel and around the world. Itzik Itach, one of the volunteers, works with ZAKA, an Israeli volunteer organization that specializes in search and rescue and recovering remains for proper burial under Jewish law. Earlier this year, Itach responded to the Mount Meron tragedy, a stampede on Lag B’Omer in April that killed 45 worshippers, thought to be the most deadly civilian disaster in Israel’s history.

SSF was founded in 2000 “with the main goal to provide first aid to Israeli and Palestinian populations in case of war, natural disasters and terrorist attacks,” according to the group’s website. When the second intifada broke out in September of that year, the team volunteered across Israel to administer first aid after terrorist attacks. In the following years the unit expanded its assistance on an international scale.

The team of Israeli medics currently on site in Surfside is scheduled to fly back home on Sunday, after which a new team may replace them, according to Dimri. The volunteers serve as SSF’s eyes on the ground, advising them on whether further assistance is needed.

With nearly 150 people still believed to be missing in the rubble of Champlain Towers, the search-and-rescue mission is continuing, even as the chances of finding survivors dims. Besides Dimri’s SSF volunteers, a group of IDF National Rescue Unit construction engineers and population behavior officers responsible for assembling a computerized 3-D model of the building to aid in the search, is also in Surfside, according to spokespeople from the unit who spoke Wednesday night at a Friends of the IDF briefing. There are also volunteers from Mexico as well as local, state and FEMA authorities participating in the response. President Joe Biden and First Lady Jill Biden are scheduled to visit the site today.