On first day of impeachment arguments, senators vote to proceed with trial

The proceedings featured video of the Jan. 6 riot, a tearful speech by Rep. Jamie Raskin and a meandering presentation from Trump lawyer Bruce Castor 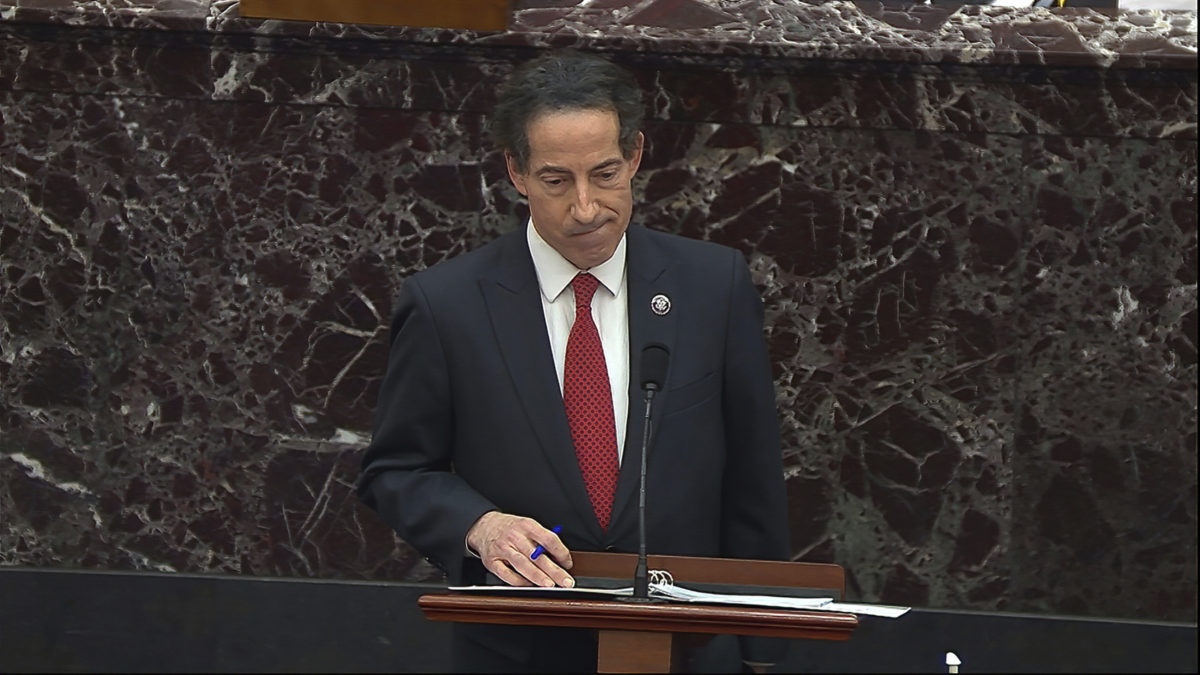 In this image from video, House impeachment manager Rep. Jamie Raskin, D-Md., becomes emotional as he speaks during the second impeachment trial of former President Donald Trump in the Senate at the U.S. Capitol in Washington, Tuesday, Feb. 9, 2021.

Former President Donald Trump’s second impeachment trial kicked off Tuesday, though the substance of the issue — whether or not the Senate has the constitutional authority to hold a trial for a president no longer in office — was somewhat eclipsed by remarks from some of the starring lawyers.

The afternoon began with a tearful speech by Rep. Jamie Raskin (D-MD), the House’s lead impeachment manager — in which he discussed his experience during the January 6 riot — followed by a bizarre, rambling presentation by Trump attorney Bruce Castor.

In one of the most surprising moments of the day, Sen. Bill Cassidy (R-LA) voted with five other Republicans and all 50 Senate Democrats that the upper chamber has the constitutional authority to hold an impeachment trial, even though Trump has left office. The final vote was 56-44.

Cassidy voted “no” on a procedural vote on a similar question last week, but appeared to have been swayed by the presentations on Tuesday.

“The House managers were focused, they were organized … they made a compelling argument. President Trump’s team, they were disorganized, they did everything they could but to talk about the question at hand,” Cassidy told reporters after the vote. “If I’m an impartial juror and one side is doing a great job and the other side is doing a terrible job on the issue at hand, as an impartial juror I’m going to vote for the side that did a good job.”

Cassidy added that the Trump lawyers’ presentation was “disorganized, random. They talked about many things, but they didn’t talk about the issue at hand.” Castor’s meandering speech was widely mocked on social media, and even questioned by former Trump impeachment attorney Alan Dershowitz.

After Tuesday’s proceedings, there seemed to be bipartisan agreement that Trump’s lawyers did not advance the president’s case, even among Trump’s staunch supporters and the former president himself.

“The first lawyer just rambled on and on and on and didn’t really address the constitutional argument. That was not one of the finest I’ve seen,” Sen. John Cornyn (R-TX) said.

“I found their case to do everything that undermines our success as a republic,” he said. “They were trying to play on blue versus red rather than the facts and the law.”

A video played by the House’s impeachment managers — a compilation of footage from the riot — also appeared to leave a strong impression on senators.

“[The Senate] didn’t see all the things that happened” on January 6, Sen. Jim Inhofe (R-OK) said. “They put it all together and it was, I thought, very effective, in that it reached some people that otherwise didn’t [see it] in person.”

Merkley agreed, calling the video “very powerful,” adding that it “seems so unreal.”

Before the trial kicked off Tuesday afternoon, a number of senators indicated that they had already decided how they will vote, though most said they planned to hear the evidence laid out by each side.

“I look forward to seeing compelling evidence about [Trump’s] role in the January 6 assault on the Capitol,” Sen. Chris Coons (D-DE) said. “My expectation is that all of us will reach the conclusion that he should not hold office.”

Sen. Bob Casey (D-PA) echoed Coons, saying he did not believe that Trump should be able to hold public office again, adding “but we’re still gonna look at all the evidence.”

Sen. Mike Braun (R-IN) took a similar approach, but in favor of acquittal.

“I think we’re going to go through a trial here over the next few days, and I think you’re going to find out the answer,” Cassidy said. “I’m one that, probably along with most Republicans, think it’s not constitutional in the first place to have a trial.”

Other senators were more explicit about their thinking.

Democrats are not expected to pick up the 17 GOP votes needed to convict Trump and open the door to a vote to bar him permanently from holding federal office.

During arguments, on Twitter, some viewers noticed that Trump lawyer David Schoen, who is Modern Orthodox, covered his head while he drank water. A number of people, including Daniel Goldman, who served as lead counsel for House Democrats in the first impeachment inquiry, explained that Schoen was covering his head to say a blessing before drinking.

Schoen told reporters Monday afternoon that he did not wear a yarmulke on the Senate floor because “I just wasn’t sure if it was appropriate, frankly. … I didn’t want to offend anyone.” He added, “It’s just an awkward thing and people stare at it.” Schoen said that he is unsure if he will wear a yarmulke on Tuesday.