The ‘Six-Minute Rabbi’ takes to the kitchen

Rabbi Hanoch Hecht, author of the new book ‘A Kabbalah of Food: Stories, Teachings, Recipes,’ schools culinary students in the laws of kashrut 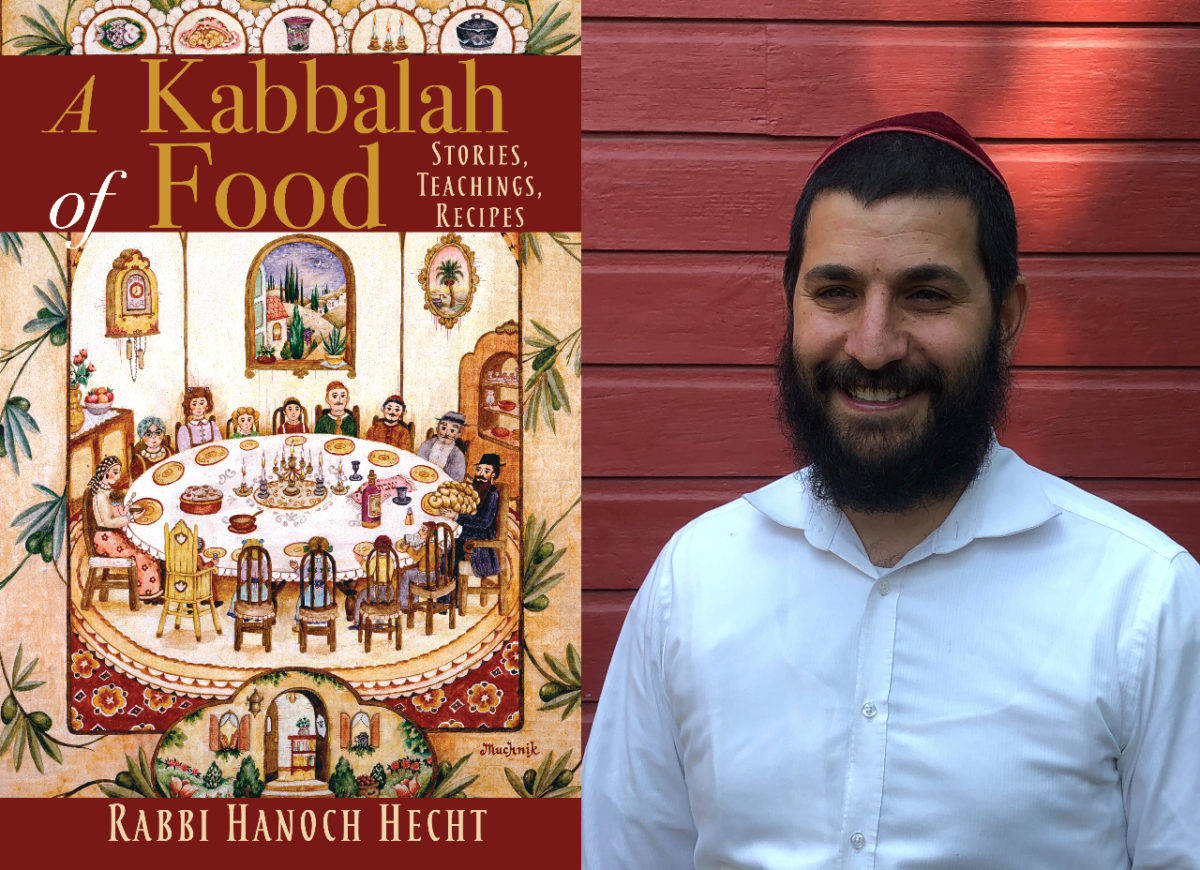 Rabbi Hanoch Hecht made a name for himself as the “Six-Minute Rabbi,” conducting on-the-fly Torah study classes largely targeting those who work in the business sector and are limited by time constraints. But in upstate New York, where Hecht lives, he’s known for something else — his love of food.

Hecht is a traditional man on an untraditional path. In addition to his duties overseeing Chabad Dutchess and the Rhinebeck Jewish Center, he was the runner-up on the first clergy-themed episode of the Food Network show “Chopped” and has been a guest lecturer at the Culinary Institute of America.

And now, he is an author.

Hecht’s latest endeavor, A Kabbalah of Food: Stories, Teachings, Recipes, explores many of the aspects of the culinary arena that caused him to fall in love with food in the first place.

“What better of a book to write than trying to capture the greatest mystical side, on one hand. And the other hand — from my perspective — the greatest part of the physical world is just enjoying the physicality of food,” Hecht said in a recent interview from his home in Rhinebeck.

His love of food began as a child, when he was a restless student and would assist the kitchen staff at his yeshiva in New York City.

“If I got thrown out of a class, I used to sneak downstairs to the cafeteria. And I used to go and help [the cook] out — not real chores, she’s really giving me onions to cut, but little things. I used to help out or move things around and help her set up,” he said. “So it actually helped me cope or get through some of the challenges of an energetic kid going through school.”

Hecht would go on to study in Brazil, where he was exposed to new foods and new recipes. “There was amazing [food] to eat from the marketplaces with the produce and all the other street food — some of it wasn’t kosher, so you didn’t eat it, but basically just watching it and looking at it, smelling it,” he said. “And then the kosher homes and the way they cook, the way they made certain traditional dishes and things like that, brought about great enjoyment to me.”

The book is broken down into two parts: the first, a collection of Hasidic stories and teachings and the second, dozens of recipes for both special events and year-round cooking. The recipes range from the traditional — brisket and charoset for Passover, for example — to the creative, like his recipe for sweet potato and cheese latkes.

But Hecht says the recipes are just guidance. “For me, I read a recipe, it’s only there to give you an idea, and then you got to go with it. I can never follow a recipe. There’s just too many steps in [the] instructions.”

He does include a recipe for his favorite Shabbat food, challah. “It’s sweeter than a lot of breads because it’s not a simple bread,” he explained. “Many simple breads are just basic water, flour. Pizza dough, for example, is just water, flour, a drop of oil. [But] challah has sugar and oil and honey and eggs. It’s a very rich dough. And then if you do it right, it’s got a nice crust on the outside. Is that why I like it? Or do I like it because it brings out memories? I don’t know.”

At the Culinary Institute of America (CIA) in Hyde Park, N.Y., Hecht taught students the basics of kosher cooking. “These kids are going to graduate and become the next generation of leaders in the food industry. And it’s very, very possible that they will come across kosher, and they should have some basic understanding of what kosher is,” said Hecht.

“The rule I always tell [students] is, basically, honesty and integrity is the most important part, right?… So that’s not your job as a chef or a food innovator or leader to make a decision on why they keep kosher, or what standards they should or shouldn’t keep kosher. Your job is, ‘Hey, you’re looking for this, I should know a little bit about it, and make sure that I’m able to do it properly.’”

He’s even had CIA students over to cook at Chabad. “Whenever we have students that have come over to us… to help out or cook for a holiday, the first thing [I tell them] is, ‘Hey, keep your knives in the car,’ because they all come with their little pouch of knives and they’re ready to get started.” But their knives have touched unkosher food and cannot be used for meal preparation in Hecht’s kitchen.

One of the CIA students he connected with was Avrohom Siegel, now 11 years out of school and living in Silver Spring, Md. Siegel was the student president of Chabad while at the CIA and worked with Hecht to put on campus programming. “We teamed up together — he was the rabbi and I was the culinary kid,” Siegel explained. “And it worked really nicely.”

The two joined forces to host a large Friday night dinner for CIA students, the first organized Shabbat dinner at the school, Hecht said. “It was very well attended — we filled up one of the lodges. We were serving chicken soup and gefilte fish and all the good things for Shabbos dinner, and it was [the] real deal.”

The duo also partnered for events on campus — among other projects, they brought Israeli chefs, including the famed Haim Cohen, to speak at the school.

One of the challenges of cooking non-kosher food, Siegel said, is not being able to taste-test along the way. That ended up contributing to Hecht’s downfall on his episode of “Chopped.”

Hecht was the first rabbi to appear on the popular Food Network show, which pits chefs against each other for a series of challenges punctuated by eliminations. Hecht made it through all three courses, but ultimately lost out to Texas-based pastor Areli Biggers.

Biggers told JI that Hecht was a skilled chef — if somewhat untrusting. “He asked me if I could taste his food, because he wasn’t gonna do it. And then when I said he needed more salt, he didn’t trust me,” the pastor recalled. “But he knows what he’s doing. He knows his ingredients.”

While Hecht takes his skills on the road, he’s not the chef de cuisine at home. Hecht admits that his wife does most of the cooking at home, but acknowledges the upside to having some kitchen skills. “Of course, if you want to be on your mother’s good side, before any holiday, you get a peeler. You know, before Passover, you get a peeler and you get ready to peel some potatoes.”