state of the race

Candidates in crowded race to succeed Rep. Joe Kennedy struggle to stand out

Speaking at a JDCA Zoom forum, the congressional contenders touted their progressive bona fides and support for Israel 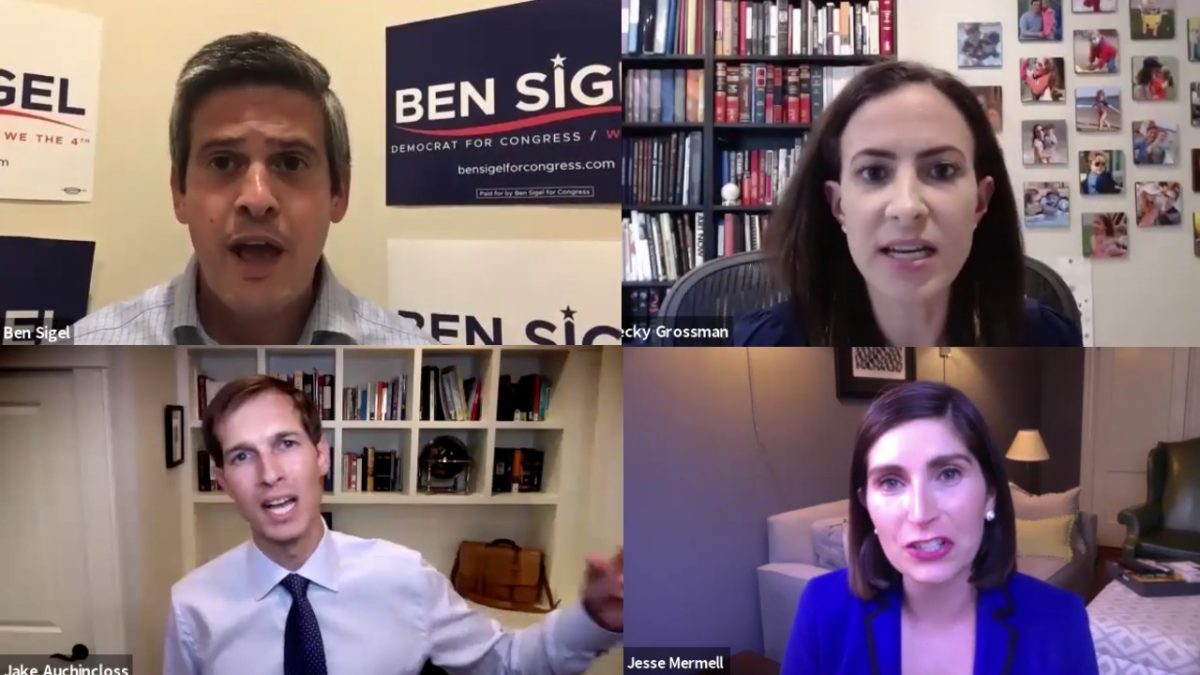 Five weeks ahead of the Sept. 1 primary election in Massachusetts, seven of the nine Democrats running to fill Rep. Joe Kennedy’s (D-MA) seat in the 4th congressional district introduced themselves to Jewish voters and sought to differentiate themselves in the crowded field.

The district, which includes the neighborhoods of Brookline and Newton, contains the largest Jewish population in New England. Mentions of tikkun olam and stories about family members immigrating to America were sprinkled into the two-hour candidate forum, which was hosted by the Jewish Democratic Council for America.

“I did not grow up in a Jewish home, but I grew up in a home practicing tikkun olam,” Alan Khazei, said on the call, describing his childhood as the son of a nurse and a doctor.

Though a number of the candidates are active in the greater Boston Jewish community, the forum was one of their few opportunities to have in-depth conversations on key issue areas for Jewish constituents. But for most, the challenge fell in conveying a unique message.

The candidates were uniformly critical of President Donald Trump’s handling of the Middle East peace process. “He basically assigned his son-in-law, who has zero experience whatsoever in foreign policy, to put together a strategic plan that has absolutely failed because the Palestinians weren’t even at the table,” said Newton City Councilor Jake Auchincloss.

Auchincloss assigned blame to Trump for the rise of partisanship on Israel. “One of the great failures of [Trump’s] administration has been to make Israel an increasingly partisan issue and it must not be. The U.S.-Israel relationship is strongest when it has strong, bipartisan consensus.”

Jesse Mermell, who served as an aide to former Gov. Deval Patrick, agreed. “Israel’s security is directly tied to the United States’s security, there can be no question about that,” she said, calling the president’s “desire to fan the flames of hate and stir up trouble” an issue that has been “detrimental to the future of the region.”

Becky Grossman, a local legislator whose father-in-law, Steve Grossman, was formerly the state treasurer and has served as a DNC chairman and AIPAC president, said that growing up, she remembered the U.S.-Israel relationship being “a cornerstone of peace and security throughout the Middle East.” Grossman condemned attempts to drive a wedge between Washington and Jerusalem.

The largely similar positions of the candidates pushed some to launch thinly veiled attacks against each other. While the candidates didn’t directly address other contenders during the web event, some traded subtle barbs over each other’s involvement in the Jewish community.

“We need a leader who isn’t just conveniently a Democrat for this election,” Ben Sigel said. “We also need to make sure we have a leader who isn’t just being pro-Israel and Jewish because of this election, but someone who has been working in the trenches alongside the Jewish community for years.” Sigel, a member of the American Jewish Committee’s New England board of directors, used his introductory remarks to talk about the conversations he has had with “over 100 different members of Congress and diplomats around the world.”

In a statement to JI, the Sigel campaign said “Ben Sigel has more experience than the rest of the candidates combined in supporting, strengthening and protecting the Jewish community over the past 20 years. It is clear from the debate that he also has a better understanding of the issues affecting the Jewish community. Ben is also the only candidate who from Day 1 of his campaign has included combating Anti-Semitism as part of his platform and has released a policy paper on combating Anti-Semitism”

Dave Cavell, a former Obama administration speechwriter and Massachusetts assistant attorney general, highlighted his work in government. “Yeah, I sit on all the boards as well. Yeah, I’ve been involved,” he said, “But day to day, what I choose to do is fight for you, fight for values that as progressive Jews we all believe in.”

Missing from the debate were Ihssane Leckey and Christopher Zannetos. A spokesperson for Leckey, who has been endorsed by Jewish Voice for Peace and If Not Now Boston, told JI that Leckey “will hold events in the coming weeks to discuss the issues facing Jewish Americans.”

A newcomer to the group was Dr. Natalia Linos, an epidemiologist at Harvard University who entered the race in April following the coronavirus outbreak in Massachusetts.

Linos noted that she and her husband, who is Palestinian-American, intentionally enrolled their children in a day care program at a Reform temple in the district.

“I know that raising children in Brookline who are Arab American, they need to have deep friendships and [a] deep understanding of Israeli history as well as Judaism, and that was a choice,” she said. “I know that growing up in an Arab-American setting, they will hear a lot of antisemitic things. And they need to know what that is and to speak up about it.”

Though trailing in fundraising totals due in part to her late entry into the race, Linos led both Sigel and Cavell in cash on hand in the most recent Federal Election Commission filing. Khazei and Auchincloss each raised more than $1 million, most of which has not yet been spent. Trailing them is Leckey, who amassed $963,000 ahead of the most recent filing.