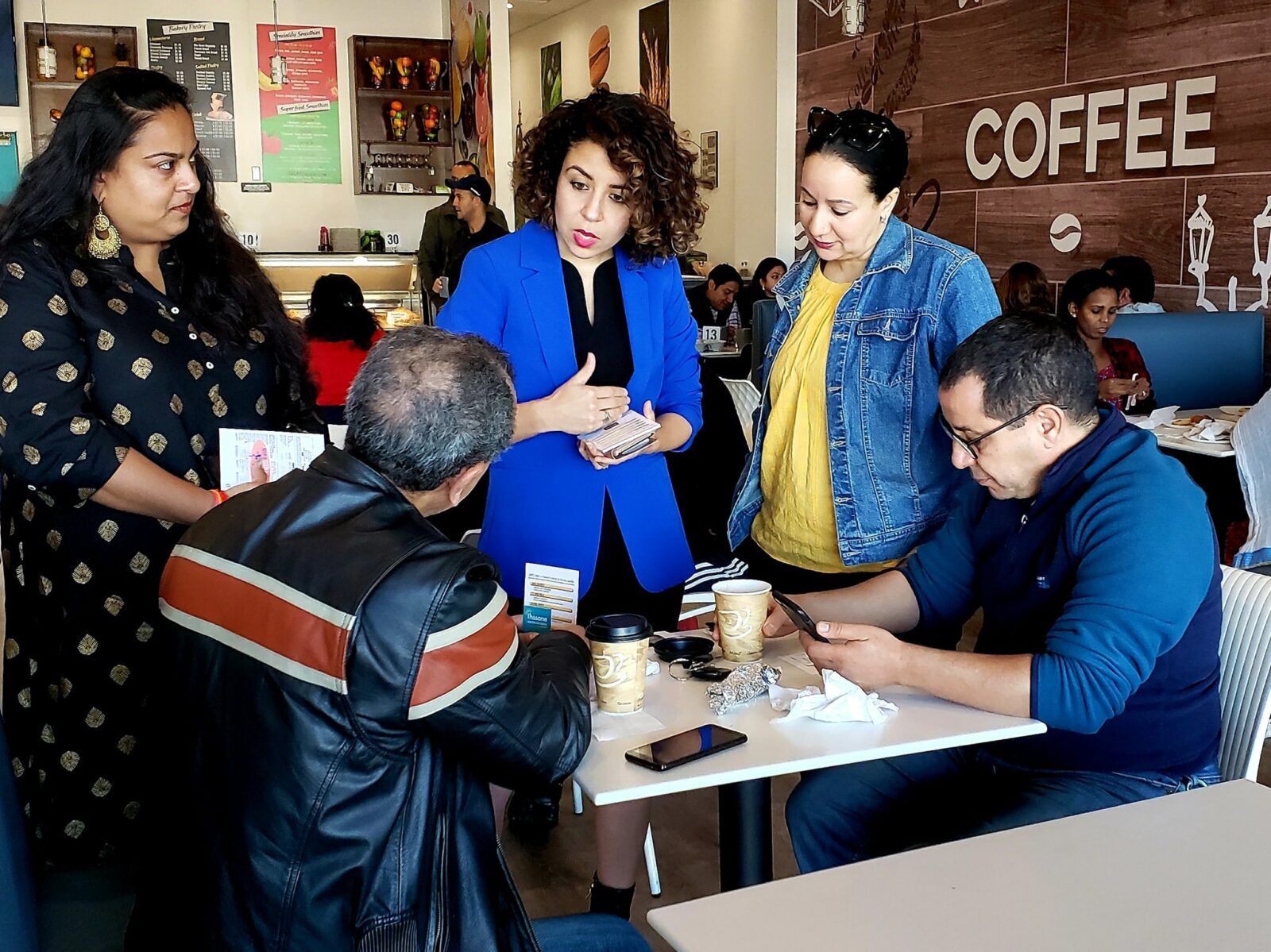 The already crowded race could expand further prior to the June filing deadline. Among the declared candidates: a city councilmember, a Marine veteran and local elected official, and the founder of the global City Year program. Many of the declared candidates strike a moderate tone reflective of the district, which spans the working-class towns of Taunton and Dighton and more affluent areas including Brookline and Newton.

But some observers predict that the large field in the solidly blue district could ultimately hinder moderate candidates. While the centrist contenders compete for the same voters, the more progressive lane is wide open for a candidate like social justice activist Ihssane Leckey.

“You are seeing this in a bunch of races around the country, that there is a lot of energy on the left wing of the Democratic Party,” Robert Boatright, professor of political science at Clark University in Worcester, Massachusetts, told JI. “The left wing of the Democratic Party is a little bit more strategic in running candidates in places that they could possibly win than going after Republicans in conservative places.”

Leckey’s entry into the race echoes a strategy seen in New York’s 14th congressional district, where progressive Alexandria Ocasio-Cortez ousted Rep. Joe Crowley (D-NY) in the 2018 primary and coasted to victory that November. When Leckey, an immigrant from Morocco, first entered the race in May 2019, she intended to challenge Kennedy, who had not yet announced he’d be seeking the Senate seat. Leckey now has more competition but her strategy is likely to remain unchanged.

Others in the race include former Obama administration speechwriter and Massachusetts assistant attorney general Dave Cavell; attorney Ben Sigel, who sits on the American Jewish Committee’s New England’s board of directors; Jesse Mermell, who served as an aide to former Governor Deval Patrick; entrepreneur Chris Zannetos; Nick Matthew; and engineer Herb Robinson. State Treasurer Deborah Goldberg withdrew from the race in the fall.

In a series of interviews prior to the coronavirus crisis, a number of candidates laid out their positions on issues ranging from foreign policy to health care to gun laws. With the wide field comes a range of experiences — many of which will affect the ways they approach issues on Capitol Hill.

Following escalating tensions with Iran earlier this year, Obama veteran Cavell blasted Trump’s decision to withdraw from the nuclear deal and suggested that his time in Washington bolstered his ability to understand relationships between the White House and foreign governments.

“President Trump’s abandonment of that deal with no alternative and no apparent strategy to prevent Iran from restarting the nuclear program was a miscalculation and frankly a betrayal of our own allies, members of the Israeli security establishment and lawmakers of both parties in Congress,” Cavell told JI. “From what I saw in the Obama White House, where every day I had the chance to have a front-row seat to how President Obama, the secretary of state, the Pentagon and our diplomatic corps used America’s influence around the world to make us safer and to increase peace and security and stability around the world, a foreign policy conducted on Twitter is no foreign policy at all.”

Those sentiments were echoed by Khazei, whose father was an immigrant from Iran and who has received the endorsement of the National Iranian American Council. “Trump has not articulated any kind of strategy for our foreign policy and before you pull out of a deal that was negotiated — not just by the United States, but the major [world] powers, it’s pretty extraordinary that they were aligned – without having something to replace it with,” Khazei said. He was also critical of the decision to assassinate Iranian General Qassem Soleimani earlier this year, suggesting that the operation bolstered Iran’s hardliners who opposed deal in the first place, unified Iranians behind the regime at a time of fragmentation and prompted the Iraqi parliament to vote for the withdrawal of foreign troops, a long-stated Iranian goal.

While many candidates were quick to take positions on current events, Sigel was more measured. He told JI that without being privy to all the security and intelligence data, it was unfair to judge how the Soleimani case was handled. “If there was an immediate threat to national security… then one needs to make that move,” he said, adding: “We have to look at the long-term game and the short term — did we save lives, or did we put more lives in danger?”

Sigel also withheld judgment on the Trump administration’s peace plan, saying he was still studying the 180-page document. He took a harder stance on the Boycott, Divestment and Sanctions movement. “BDS is a red line for me, the whole premise of that is calling for the destruction of Israel,” he said. “It also hurts the Israeli-Arab population and it hurts the Palestinian population.”

Auchincloss, whose Jewish great-grandfather fled Russian pogroms, echoed Sigel. “BDS is antisemitism and anti-Zionism dressed up in fashionable new clothes,” he said. “It’s the same old story, whether it’s in European capitals or on college campuses.”

A number of candidates derided the Middle East peace plan unveiled by President Trump earlier this year, with Grossman and Auchincloss both noting the absence of Palestinian voices at the table. Most of the contenders called for a two-state solution to resolve the conflict.

Lackey has largely been silent on Middle Eastern issues, directing much of her attention to domestic progressive causes including Medicare For All and the Green New Deal. After initially agreeing to an interview, Leckey’s spokesperson stopped responding to requests.

Grossman, a mother of two, cited her family as her inspiration for entering the race. “I wake up every day thinking about the world that we are creating for them and leaving to them,” she said. If elected, Grossman told JI she hopes to work to protect the Affordable Care Act and take on the pharmaceutical industry and gun lobby. “When my daughter Madeleine began first grade, my husband and I dropped her off at school and I realized that her classroom was immediately adjacent to the main office. And the first thought that went through my head was that if a school shooter was to show up there, hers would be the first classroom to go,” she said. “That is not a conversation that any parent should ever have to have with their child. Or fears that any child should ever go to school thinking about,” she explained.

Auchincloss told JI that his own story began with his grandfather during WWII. “A poor skinny Jewish kid, 17 years old, walks into a Marine recruiting office,” he said, explaining that instead of going overseas, his grandfather was sent to study engineering at Purdue University. “It totally turns his life around. He seizes the opportunity and goes on to become a very famous scientist, he pioneers the development of artificial limbs… At a time when Jews are being persecuted in Europe, the U.S. government sends a poor Jewish kid to college. And that has, since I was a little kid, been imprinted on my own definition of what America should be and [that] public service is owed to make sure this is a country where the condition of your birth does not determine the outcome of your life.”

Cavell told JI that his passion for public service is testament to his Jewish faith and his family’s example, noting that his father registered black voters in Mississippi during the 1964 “Freedom Summer” and his mother was a lawyer on behalf of public interests. “I have spent my life in public service,” said Cavell, who taught fourth-grade in a Bronx public school after college. Cavell said that same inspiration led him to work as an assistant attorney general in Massachusetts. “I wanted to fight for people who needed a voice, who needed someone to fight for them — and that’s why I’m running for Congress,” he said.

Sigel, the son of a Puerto Rican mother and a Jewish father, said the district’s varied communities would be stronger if they were more united, a theme central to his campaign. “We are seeing some in the Democratic Party who say you can’t be pro-social justice, pro-social issues and pro-Israel at the same time and I want to quash that,” he said. “I think that I can be that strong voice that many in the Jewish community have been frustrated about in the past few years.”

A number of the candidates are from the more prosperous areas of the district. This was not lost on Jesse Mermell, who grew up in a working-class home and now lives in Brookline. “l am looking at everything through the lens of economic fairness,” Mermell told JI. She wants to focus on health care, paid family and medical leave, as well as transportation and change issues if elected. “When you look at this district being incredibly economically diverse… I am convinced that not just my professional experience but my lived experience of being from a place that much more closely mirrors some of the southern parts of this district where economic hard times have been the reality for so long, will make me a better candidate and more importantly a better member of Congress fully representing and empathizing with every resident of the 4th congressional district.”

Khazei told JI that the current political era has brought out the best and worst in people. “People are becoming engaged, many for the first time, saying ‘we are going to stand up for democracy, we are going to stand up for human rights’ and we are not going to cede what makes America so special,” Khazei said, noting that this new energy needs to be tapped to bring the U.S. back to its founding principles. “Part of the promise of America is that each generation leaves the country better for their children and grandchildren. We are the first generation that is at risk of not doing that and I don’t want to be part of that. I don’t feel like it’s too late, I think we have to turn things around” he said. “I have some unique experience that can make a difference if I get into Congress.”

It remains to be seen how the rest of the primary season will shake out, and what surprises may shake up the race before — or after — the June filing deadline. Boatright said it’s too early to identify the leading candidates, telling JI, “It’s really a Democratic free-for-all.”