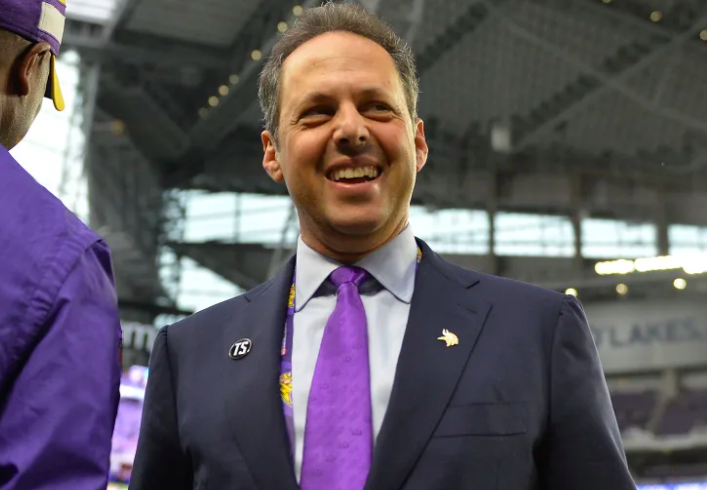 Last year, Minnesota Vikings owner Mark Wilf took part in the NFL draft from Minnesota, surrounded by a team that included his general manager, scouts and coaches. This year, things will look a little different. Wilf, who is waiting out the coronavirus pandemic with his family in New Jersey, will participate in tonight’s draft virtually. Earlier this week, Wilf spoke to Jewish Insider about the league’s switch to digital, the NFL’s fundraising efforts and how Jewish philanthropy is supporting struggling organizations amid the pandemic.

Game time: Wilf, who has been a co-owner of the Vikings since 2005 alongside his brother Zygi, nephew Jonathan and cousin Leonard, told JI that a lot of planning has gone into running the draft online. “Every club will have their — via Microsoft Teams, I think — there is our [general manager] and coach and our scouts that we normally gather in a draft room. Everyone will be gathering virtually.” Despite partaking in the draft from home, Wilf is optimistic. “I’m sure it’ll be something exciting for the fans and it’ll be exciting for us — it always is.”

Doing good: The virtual draft isn’t the only change the NFL is making this year. The league is hosting a three-day ‘Draft-A-Thon’ to raise money for organizations responding to the COVID-19 crisis. Among the recipients are Meals on Wheels America, the American Red Cross and United Way. Earlier this week, the Wilf family made headlines with a $1 million donation to United Way, one of the six participating charities supporting relief efforts. To date, the Wilf Family Foundation has contributed more than $5 million to causes related to the pandemic, both in Minnesota and the Northeast, where Wilf is based.

‘Arm-in-arm’: Wilf is also part of the newly formed Jewish Community Response and Impact Fund, a coalition of foundations collectively contributing $80 million to organizations struggling to cope with the economic impact of the coronavirus. The foundations are partnering with the Jewish Federations of North America — Wilf is the chair of JFNA’s board of trustees — to disburse the interest-free loans and grants. “We’re in a crisis and a time that’s unique and we have to respond in ways that are collective,” the billionaire told JI. “Whenever we’ve had to do things as a Jewish community, we’re most effective or most powerful or most impactful when we do things together and collectively. So the reality of the crisis means we have to certainly be arm-in-arm together and fighting all this.”

What’s next? JCRIF’s backers, Wilf said, want to make sure communal institutions are able to stay afloat in the short term, recognizing that “we also have to begin planning and get the best and brightest to think about how do we move going forward.” The community, he said, will be faced with new challenges, specifically when it comes to financial solubility in a post-pandemic environment. “How do we fundraise in this new world? With virtual models or other ways to one-on-one solicit that maybe we’re not as familiar with?” he said. “Also, we have to face a world where financial wherewithal may not be what it was because of the economic uncertainty. So those are all challenges. I keep using the phrase ‘all hands on deck’ and we have a lot of bright minds in the Jewish community and we’re going to look to engage them to help us think through some of these things.”