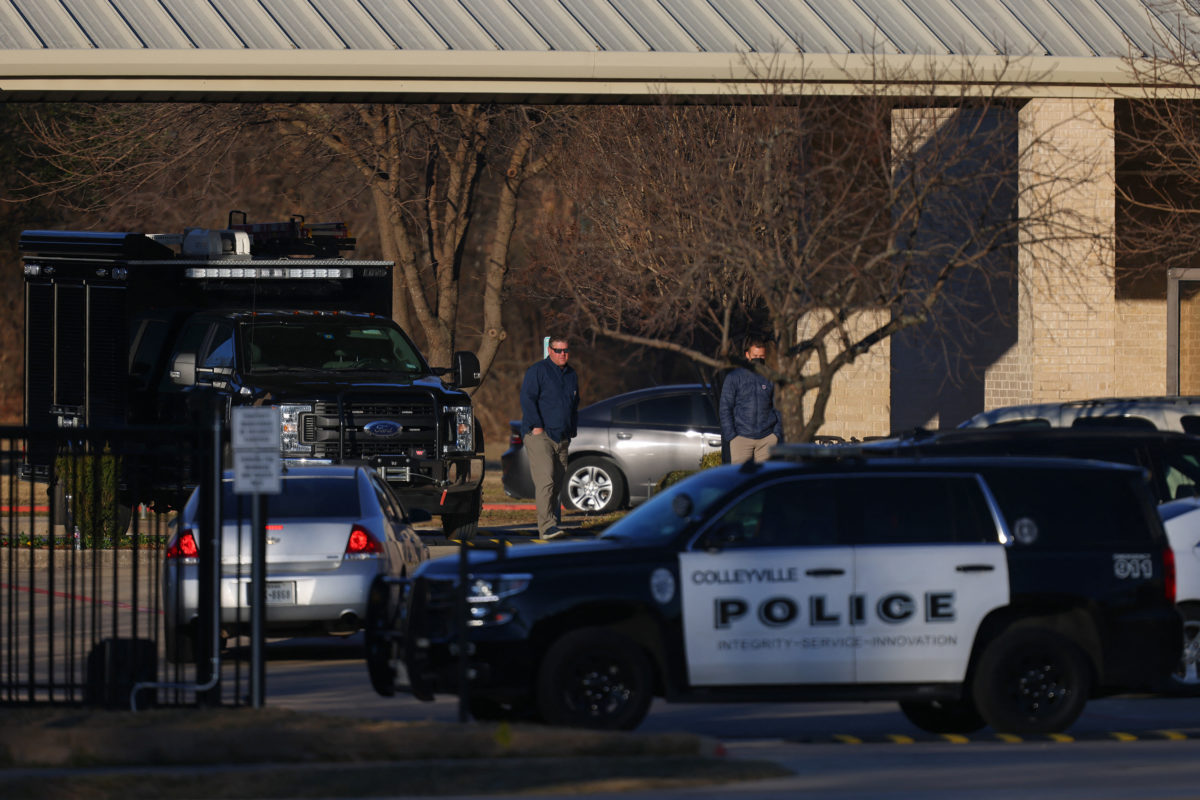 A police car sits in front of the Congregation Beth Israel Synagogue in Colleyville, Texas.

Jewish advocacy groups offered mixed reactions on Tuesday to the announcement of the $305 million 2023 federal budget allocation for the Nonprofit Security Grant Program. The allocation represents a 22% increase over 2022 funding levels but falls short of the $360 million funding goal that many Jewish leaders and lawmakers have been pursuing for years.

The NSGP provides funding for religious institutions and nonprofits to enhance their security. Funding has increased significantly in recent years, most recently to $250 million for 2022, but has fallen short of meeting the target set by many advocates on Capitol Hill and Jewish community groups. The allocated funding has also fallen well short of meeting the increasing demand for grants at a time when incidents of antisemitism have reached a record high, according to the Anti-Defamation League.

Talks appeared to be closing in on the $360 million funding level as of late last week. Jewish leaders who spoke to Jewish Insider last week were optimistic, and one individual with knowledge of the talks told JI on Friday that the funding was close to locked in, with Senate Majority Leader Chuck Schumer (D-NY) leading a push by citing rising rates of antisemitism.

But the situation changed by the time the budget bill was released in the early hours of Tuesday morning. Some negotiators were pushing to keep all funding levels for Department of Homeland Security programs at 2022 levels, a source familiar with the negotiations told JI, but NSGP was one of few exceptions made, alongside flood response funding.

Nathan Diament, executive director of the Orthodox Union Advocacy Center, described the $305 million allocation as a positive step in light of “all kinds of negotiations and cross pressures” that go into negotiating the massive annual spending package, even if “we certainly would have liked $360 [million],” likewise noting that NSGP was one of the few programs that saw increased funding.

“The increased funding will help Jewish communities protect their facilities and members from increasing antisemitic violence,” Diament added in a statement.

Alongside Schumer, the White House requested $360 million for the program last year; $360 million was the target set in the initial House and Senate appropriations bill drafts and supported by more than a third of House members and key lawmakers in the Senate. Just last week, Congress passed the National Defense Authorization Act with a provision supporting, but not guaranteeing, the $360 million level. President Joe Biden also touted increases in NSGP funding in his Hanukkah address on Monday.

“The Jewish community and other nonprofit community members will get more resources. And that is good, plain and simple,” Ryan Greer, ADL’s national security director, told JI. “That doesn’t mean we don’t have more work to do. But overall, we feel good that there’s some progress made.”

“It is a little frustrating that there seems to be a lot of consensus around $360 million being the right number,” Greer continued, but noted that funding has increased annually, even “in a year where the budget was a tight negotiation from Congress.”

The program fulfilled just over half of 2022 grant applications, with total grant requests increasing to $447 million. The Department of Homeland Security has focused efforts recently on increasing outreach about the program and making it easier for institutions to apply.

“We of course are disappointed it’s not all the way to $360 [million], which we believe is the minimum necessary given the number of eligible grants that did not receive funding last year, so we’re going to continue to fight another day for more funding, but we’re definitely grateful for this significant increase,” Broitman said.

Rabbi Abba Cohen, Agudath Israel of America’s vice president for governmental affairs, told JI that he is generally “very pleased,” adding, “Yes, it’s a disappointment, but overall, the important thing is that it’s going to be a stronger program, it’s going to serve more people.”

Supporters of the program on Capitol Hill praised the outcome of negotiations, while pledging to continue their advocacy.

“I remember a few years ago when this program received next to nothing in our budgets. It has been through our hard efforts and by educating our colleagues that we have built the program out to this level, and I am proud of that work. While this figure is not every cent we requested, it represents a healthy increase that will protect communities and put our neighbors’ minds at more ease,” Rep. Bill Pascrell (D-NJ) said. “I believe lives will be saved by this funding. Because the threat of domestic terrorism only continues to grow, we will keep pushing through the next Congress to get the full amount we sought. We will never stop pushing for this important program.”

Sen. Kirsten Gillibrand (D-NY) told JI, “Every New Yorker and American deserves the right to worship freely without the threat of violence… I am proud to have secured a record $305 million for the NSGP in this funding package and I will continue fighting to ensure the Jewish community is safe and secure.”

A source told JI that Schumer sees the $305 million as sufficient to keep pace with near-term needs, but plans to continue working for further increases.

The $360 million target has remained largely consistent in the past few years in part because of congressional support for that funding level, even as total grant requests have continued to increase, Jewish community leaders said.

“A lot of the $360 [million] revolved not only around the actual needs of the program but also support from Chuck Schumer,” Agudah’s Cohen said. “We pushed $360 [million] a long time ago, and now the president has supported $360, so I think right now the Nonprofit Security Grant world is revolving around $360.”

“We’ve got to get to $360… clearly what we’re getting now isn’t enough,” he continued. “I don’t know that $360 will be enough. We’ll have to see how that goes. But going forward, I think we’ll have to talk about broadening the scope of the program.”

The OU’s Diament noted that the $360 million level, developed in recent years, was aligned with the demand level at the time, and said, “even if the demand has gone up somewhat, we still think that’s an achievable level… We still feel comfortable with that request.”

The ADL’s funding request for the program currently sits at $500 million, Greer said. He noted that the $360 million level would have been sufficient to fulfill around 90% of grant requests — which he said would constitute essentially full funding for a program like NSGP — in past years.

In the coming two years, the Republican-controlled House has pledged to rein in federal spending across the board and has pledged heavy scrutiny of the Biden DHS.

But Jewish community advocates said they haven’t heard any specific reason for concern about the program’s funding under a GOP House and emphasized that it has enjoyed bipartisan support in the House, as well as the backing of key Senate leaders like Schumer.

“Without being overly optimistic, this has been a perennially popular program on both sides of the aisle,” Broitman said. “I’m more optimistic about this program than maybe I will be about others.”