What does the botched Ukraine letter mean for congressional progressives’ foreign policy agenda? 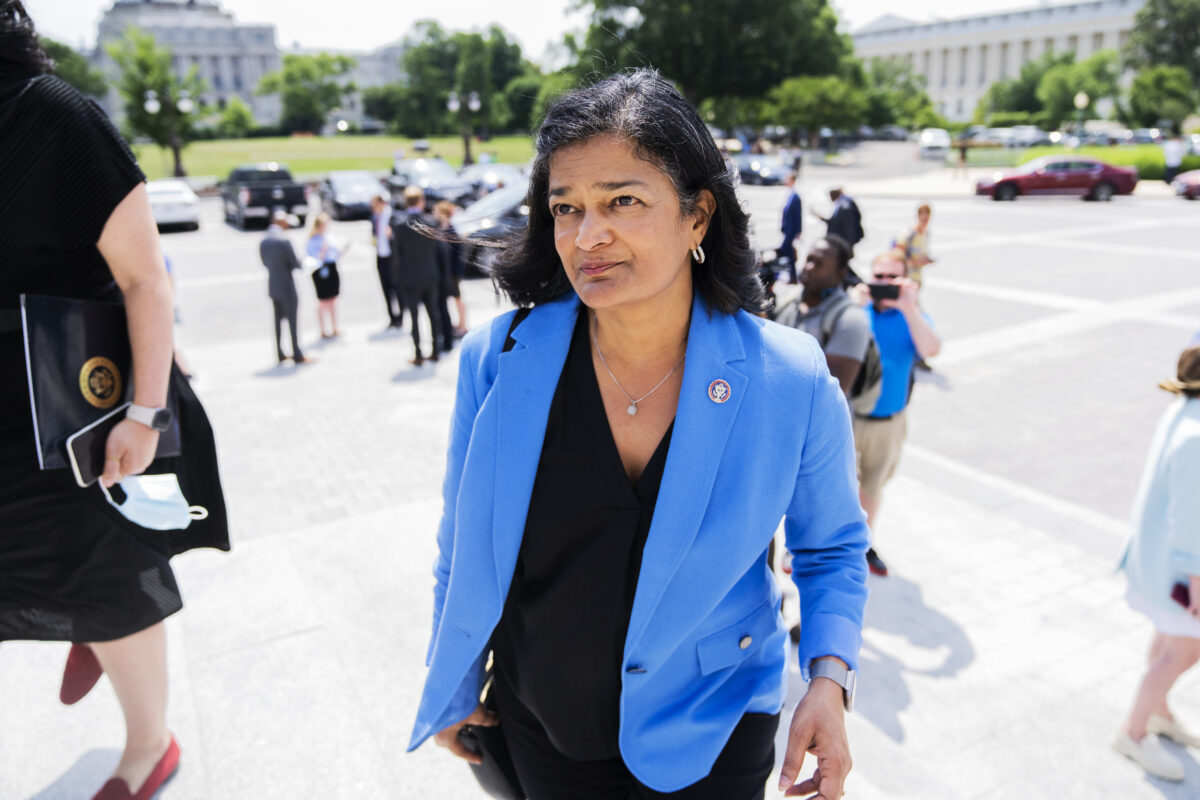 The House Congressional Progressive Caucus’s retracted letter last week urging direct talks with Russia over its invasion of Ukraine rapidly turned into a public embarrassment, with Democrats across the spectrum — including some of the letter’s most prominent signatories — distancing themselves from the letter or disavowing it entirely. But the impact of the incident could prove more far-reaching for House progressives.

“This ill-conceived, poorly researched, fundamentally misguided letter has done tremendous damage to the credibility of the Congressional Progressive Caucus, and the willingness of its members to engage in anything dealing with national security and foreign policy,” said Joe Cirincione, the former president of the Ploughshares Fund, a former vice president of the Center for American Progress and a former senior fellow at the Carnegie Endowment for International Peace. “This letter had exactly the opposite impact from what they wanted, which was to get progressive members engaged in foreign policy.”

Joel Rubin, a former deputy assistant secretary of state who led Jewish outreach for Sen. Bernie Sanders’ (I-VT) 2020 presidential campaign, noted that “progressives have not historically made foreign policy their highest priority,” and said they now run the risk of rolling that involvement back further.

“I think it’s going to make them very hesitant to speak up, even though we really do need that voice in the mix,” Rubin continued.

One former Democratic congressional staffer, who requested anonymity to speak candidly about members of Congress, predicted that the incident could have broader ripple effects on foreign policy well beyond the Progressive Caucus, emphasizing that they expect Democratic lawmakers and staff to apply a “stricter level of scrutiny” across the board on foreign policy issues especially.

“Every member of staff is going to be wary the next time a letter like this comes along, you’re going to look at it much more closely. Your instinct right now is going to be — you’re almost going to have to prove that it’s worth doing,” the ex-staffer said. “I think the personal dynamics are such that other Hill staff people in other offices are going to look with high skepticism on anything coming from the same sources. They will sign on eventually, but it’s going to be a harder lift.”

But a second former Democratic congressional staffer was more skeptical that these events would have much impact on the signatories’ thinking.

“The progressives who’ve signed that letter come from very safe districts and are pretty consistent on the foreign policy issues on which they engage,” they said. “I don’t believe they will be disabused from further engagement because of this mishap… It’s a small and marginalized group that is not particularly sensitive to the broader caucus or foreign policy implications of Democrats looking weak on foreign policy.”

They did, however, anticipate that it might make others outside of the 30 who signed the letter more hesitant to join with members of that group.

“It will make people think twice about signing these kinds of letters, or at least make them think about the downside of something that looks pretty anodyne… after names 1-30, it will make names 30 to 100 think twice,” they explained.

Peter Juul, an editor and columnist for The Liberal Patriot with a background in foreign policy and national security, agreed that the fallout will likely be more limited to the group of signatories.

“They’ll probably think twice before they sign onto something like that again… The embarrassment is probably not something they’re going to forget very soon,” he said. “It might induce a little more caution on behalf of some of these members to think twice about reading the fine print… on some of these letters and trusting certain people to handle them properly.”

“More broadly,” he continued, “the pretty quick reaction is a good sign” for party leadership and the party as a whole.

Many of the most prominent signatories to the letter have also been outspoken advocates for nuclear negotiations with Iran and critics of Israeli government policy, as has the Quincy Institute for Responsible Statecraft, which was reportedly the major outside backer of the letter. The Quincy Institute broadly advocates for “restraint” and a less-militarized foreign policy.

The first former staffer predicted that the fallout from the letter will make lawmakers wary about going “beyond what is an existing Democratic consensus — going beyond where people are already comfortable.” Public support for Israel, for example, which remains widely popular in the caucus and among voters, will likely not be impacted, they explained.

“But going beyond that existing consensus, I think, just got a lot harder, especially from the left,” they said.

The incident might also make the letter’s signatories more hesitant to speak out publicly.

“Elected members are not going to change their positions because of this, but I can see a well-grounded reluctance to engage publicly,” they said.

The second staffer disagreed. “[The signatories] are the same people that are not going to be disabused from speaking out on Israel and Iran issues again — for them they see it as a matter of principle,” they said.

Juul said that he does not expect Progressive Caucus members to change their positions on issues like Iran in the wake of the letter.

Rubin predicted that progressives will have to tread carefully in how they approach and frame national security initiatives going forward.

“The way that it’s perceived publicly is going to have to be done incredibly carefully, more thoughtfully, more rigorous, it’s going to have to have more validation from outside,” he explained. “What they’re running the risk of right now is returning to a pre-Iraq War phase of minimal impact on national security… It’s up to the progressives on foreign policy to make the case more effectively and in a more professional manner.”

“We can’t have this kind of stuff anymore and expect you to have people listen to us, quite frankly,” Rubin continued.

“Who in their right mind is going to trust the Congressional Progressive Caucus to issue a letter on national security again?” Cirincione said. “I don’t know how long that’s going to last. And I hope after the election there will be some recalibration of this, but it looks bad.”

The fallout, he added, has been a particular blow to Rep. Pramila Jayapal (D-WA), chair of the CPC, and the staff involved with the effort.

“The fury inside the Democratic Party went from top to bottom; it’s spanned from Speaker [Nancy] Pelosi to [Rep.] Ilhan Omar,” he said.

The Hill reported last week that the fallout would likely make Jayapal’s path to a position in Democratic House leadership next year — which she has been eyeing — more challenging. Jayapal has generally aligned with the far-left flank of the party on issues related to Israel policy, and, earlier this year, floated a policy of barring candidates from receiving Progressive Caucus endorsements if they accept support from Democratic Majority for Israel.

Juul agreed that, given that “Jayapal appears to have been the prime mover and was definitely the public face, I think that some people might hold that against her” in her campaign for leadership. However, Juul said that how much the letter affects her leadership ambitions could depend on how large the Democratic Caucus is next year, and how much sway the progressives have.

But the second former staffer said that, while the events “[put] a dagger in Jayapal’s leadership ambitions among members who weren’t going to support it anyway,” they might have a lesser impact on her existing supporters.

Cirincione laid particular blame for last week’s events on the staffers who pushed the letter, whom he said “should be” fired.

“You can’t let the members off the hook here, they failed in their own responsibility,” he said. “But in some ways, they trusted the staff. I mean, that’s what members do.”

The situation could also make the outside groups that promoted the letter, like the Quincy Institute, “persona non grata on Capitol Hill indefinitely,” according to Cirincione. He was a fellow at the Quincy Institute, but resigned in protest of its response to the Russian invasion of Ukraine.

“The voices that pushed through this letter put these members in a very bad position,” Rubin said. “Sort of snowed them, to be honest.”

The first former staffer agreed that Quincy will “pay a heavy price in terms of both their credibility on the issue and also their political set’s sensibility.”

Rubin noted that progressive Middle East foreign policy groups were generally uninvolved with the effort, and do not seem to have been directly impacted by the blowback.

He said that this incident, in combination with ongoing events like the war in Ukraine and the women’s rights protests in Iran, could provoke a “pivotal rethink in the progressive foreign policy community about what comes next,” describing the letter as “a symptom of a broader problem.”

“They’re going to have to start redefining what it means to be progressive in foreign policy,” he explained. “And in many ways, you saw the struggle through this letter. The struggle of the anti-interventionist, isolationist, libertarian wing of the progressive side versus the human rights and engagement, and pro-diplomacy side, sort of fighting it out.”