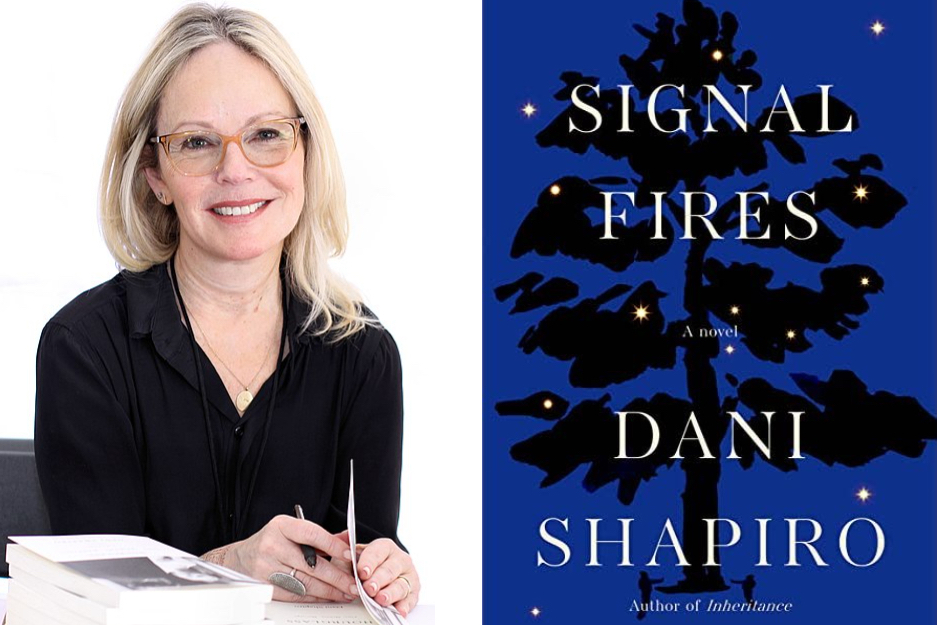 It languished in an office closet for 15 years, until pandemic-induced boredom led Shapiro to clean out her office and find the manuscript, which then contained around 100 pages. Now, the novel that almost never existed, Shapiro’s first work of fiction in 15 years, is a national bestseller.

It’s fitting that Shapiro rediscovered Signal Fires during the pandemic. The book, which flits between members of two interconnected families in the aftermath of a 1985 car crash, is filled with 2020-specific references, from face masks and Zoom school to moments of applause for health workers — while also emphasizing the importance of human connection.

“We experience time as marching inexorably forward, but we’re not living that way. We’re dragging our pasts along with us,” she said of the decision to include both the recent reality of the pandemic and the flashbacks into the childhoods of the various characters. “We’re imagining the future. We’re always in this kind of place of multiplicity.”

Shapiro, who moved to rural Connecticut from New York City before rediscovering the Signal Fires manuscript, also sees her family’s relocation as helping to tease out the spirituality of the work, which she says is not about “God as in the guy with the beard and the sky kind of way, but in a way that really sort of permeates our ethics and our actions and the way that we live our lives.”

The move from city to country allowed Shapiro to see a clear night sky for the first time, she said, which led to the cosmos becoming an essential part of the book — they captivate 11-year-old Waldo Shankman, whose interest in astronomy is what first links him to Ben Wilf, the patriarch of the Wilf family. The two characters and their connection, Shapiro said, are the center of the story.

The book is also influenced by the author’s own Jewish identity. Shapiro, who grew up in an Orthodox household, had previously written a New York Times bestselling novel, Inheritance, about learning that her biological father was actually a non-Jewish sperm donor. Growing up, Shapiro’s blonde hair and blue eyes meant that she often heard from others that she “didn’t look Jewish,” comments that oftentimes led to her focus her writing on her Jewish identity. “I wanted people to know that I was Jewish before they could say something that I might not want to hear,” she added.

“To me, it is a very Jewish book that doesn’t announce itself as such,” Shapiro said. “It really was a feeling of wanting the Jewishness to simply be embedded in this family.”

Though the book is not centered around any explicitly Jewish event, it still contains many references to Judaism as both a religion and a culture. Both families, for example, are Jewish, and Shapiro writes about Ben Wilf’s childhood in a Jewish, immigrant neighborhood in Brooklyn. Sarah, one of the siblings, struggles with lashon hara — idle gossip — and joins a synagogue. Shabbat dinners are a frequent occurrence. The characters are also constantly thinking through and struggling with the idea of wholeness and with how to repair the world, ideas that Shapiro considers inherently Jewish.

Shapiro also chose to not discuss incidents of antisemitism in the book, though she says that antisemitism was a constant feature of her childhood due to growing up in a majority ”blue blood WASPy” neighborhood, as well as her not conventionally Jewish phenotype.

“You can’t inject something as massive as antisemitism into the delicate structure of a novel unless you’re ready to absolutely make it about that,” she said. “I mean, it’s something I think about every day, but it wasn’t something that felt like it belonged in this story of these characters at these moments in their lives.”

Even so, Shapiro says that the embedded Jewishness is political in and of itself, referencing a recent question from a Jewish reader who asked why the families are eating treyf, or not kosher.

That question, of how Jewish people belong to a world outside of a Jewish context, is at the heart of Signal Fires, even if the book does not, as Shapiro said, announce itself as such.

“Jewishness is threaded through every idea that I have, everything that I am,” she said. “The way that I talk, the way that I think, the songs that go through my mind, the way that I feel on the holidays. I saw these characters as very much being like that.”