Pope Francis made his first appearance at the gathering, nearly two decades after its inception 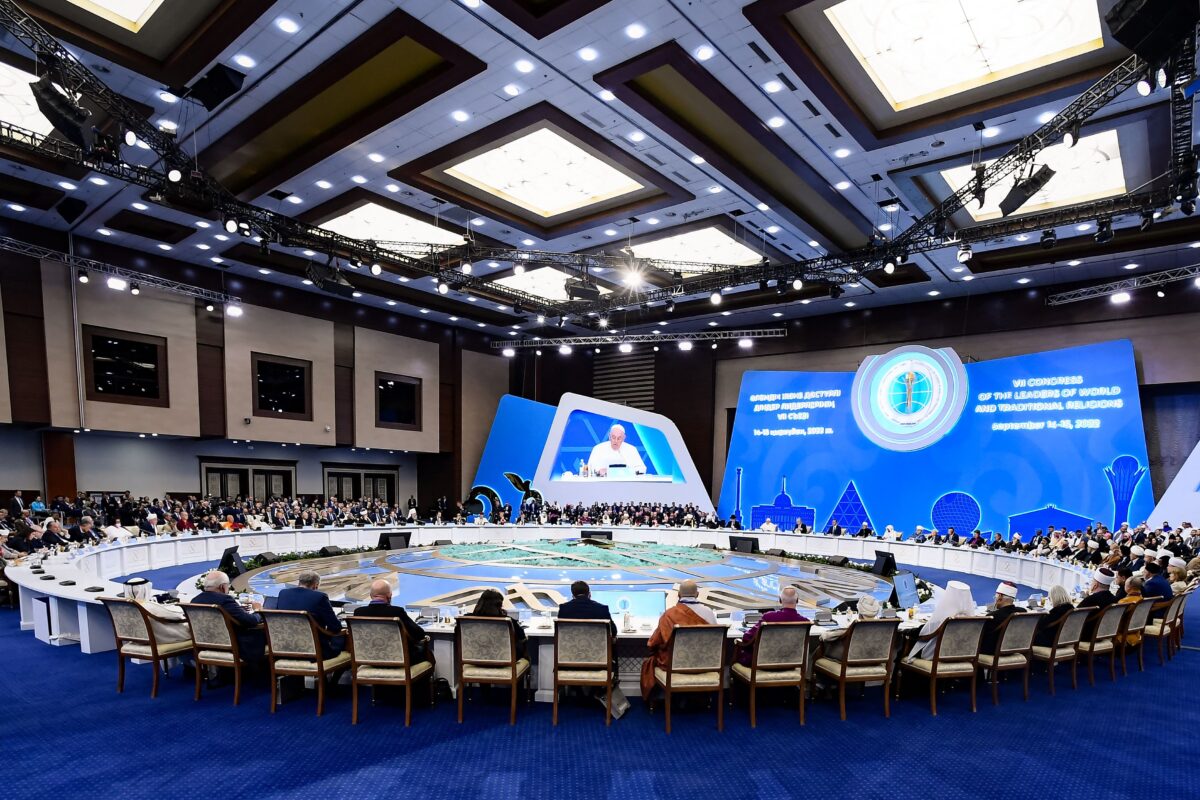 Pope Francis attends the conclusion of the VII Congress of Leaders of World and Traditional Religions at the Palace of Peace and Reconciliation in Nur-Sultan on September 15, 2022.

Israel’s two chief rabbis, Rabbi Yitzhak Yosef and Rabbi David Lau, Egypt’s Grand Imam Sheikh Ahmad Al-Tayyeb and Pope Francis were just some of the top clergy who gathered last month at the VII Congress of Leaders of World And Traditional Religions in Astana, Kazakhstan’s capital city, to discuss ways in which the world’s religious leaders could work together to overcome extremism, conflict and disunity around the world.

“It was an extremely well-organized event and obviously the centerpiece was the participation of the pope,” Malcolm Hoenlein, vice chair of the Conference of Presidents of Major American Jewish Organizations, who was honored at the event for his multifaith work, told Jewish Insider.

“People’s remarks were very sensitive and guided towards the role religion can play in fighting against extremism,” Hoenlein, who has seen the congress grow from an intimate gathering with a handful of religious leaders in 2003 to a global forum drawing religious leaders from more than 100 countries and communities, told JI.

“This is the seventh in a series that the government of Kazakhstan has hosted,” he continued, describing how it began with a visit to the Muslim country by a delegation from the Conference of Presidents and how the signing of the Abraham Accords between Israel and four Muslim countries in 2020 has helped open up dialogue and softened attitudes towards the Jewish community and Israel.

“When people make speeches they convince themselves and others of the role and responsibility that religious leaders have to fight extremism and terrorism, especially within their own faiths,” Hoenlein said, adding that he hoped such a high-profile conference would help to “create the universal climate against hate.”

The presence of the pope at the event for the first time helped to propel the interfaith meet-up into the spotlight, he noted.

“Peace is born of fraternity,” Pope Francis said in his concluding address. “It grows through the struggle against injustice and inequality; it is built by holding out a hand to others. We, who believe in the Creator of all, must be on the front lines in promoting the growth of peaceful coexistence.”

He added: “We must bear witness to peace, preach peace, implore peace.”

The participants, who included representatives of Islam, Christianity, Judaism, Buddhism, Shintoism, Taoism, Hinduism, Zoroastrianism, Jainism and Bahá’í, as well as notable leaders of international organizations and political figures, signed an official declaration of peace and unity, which was later submitted to the 77th session of the United Nations General Assembly.

Hoenlein said that while the formal speeches and declarations were moving, it was the activities on the sidelines, in the hallways beyond the main plenum, that were most powerful.

“I sat beside an Iranian and a Pakistani,” he said. “When I first sat down, I shook hands with the Iranian, who holds a significant position, but he was very reluctant to talk to me, obviously, but later on, by the time we finished the second session, I engaged him, and we talked – the same with the Pakistani.”

Also behind the scenes, both of Israel’s chief rabbis (Yosef represents the Sephardi community and Lau the Ashkenazi) held face-to-face meetings with the pontiff, with the Jewish and Catholic leaders discussing ways to bolster cooperation between the two religious groups, according to media reports.

Hoenlein said that the role of Kazakhstan, a Muslim majority country, was essential to the success of the gathering.

“I think Kazakhstan is a model for what we can hope for in other Muslim societies as we open our relationship with other Arab and Muslim countries,” he said, adding that thanks to the Abraham Accords “the atmosphere is better because I think people have seen the opportunities that exist for Israel and with Israel, and I hope that Israel will have more and more representation at gatherings like this in the future.”