CJ Trapeur has received at least $5,250 from the Masters campaign, which has paid him for 'consulting' services as well as 'campaign staff salary fees' 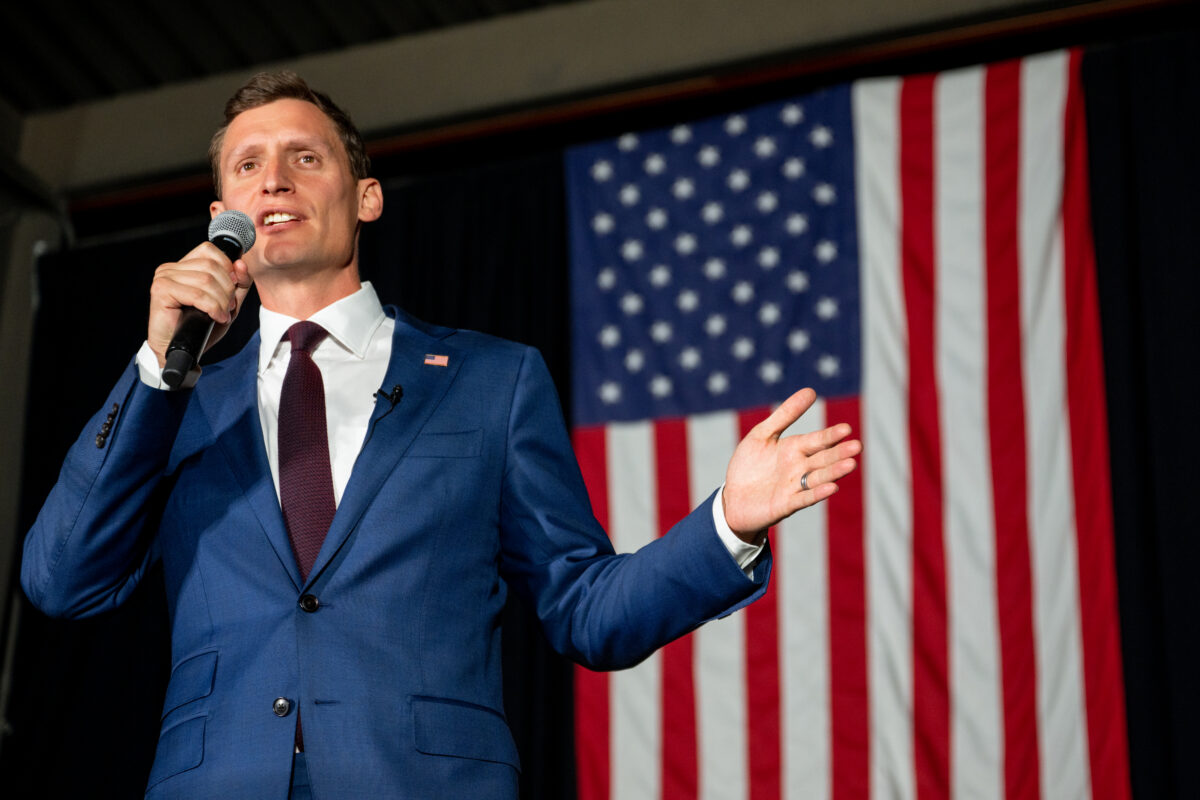 In an email newsletter regularly sent to supporters of Blake Masters, the Republican Senate nominee in Arizona, one recurring feature highlights a “volunteer of the week” with a brief shoutout from the campaign as well as an accompanying photo.

Unlike others who have gotten the nod, the most recent honoree, identified as “CJ from the West Valley” in Tuesday’s newsletter, is pictured alongside Masters himself as the two flash dueling victory hand signs while smiling for the camera. “Thank you for all you do, CJ!” the newsletter exclaimed.

Left unmentioned, however, was that CJ, whose full name is CJ Trapeur, is actually on the campaign’s payroll. The newsletter also failed to note that Trapeur is, perhaps more notably, a well-connected far-right activist in Arizona who until recently served as chief operating officer of an extreme Christian nationalist group, called American Virtue, that has courted controversy in recent months.

Since December, Trapeur has received at least $5,250 from the Masters campaign, which has paid him for “consulting” services as well as “campaign staff salary fees,” according to filings from the Federal Election Commission. The most recent disbursement, late last month, was for $250, campaign finance records show.

The sum is by no means a major expense for Masters, who — while significantly outraised by his opponent, Sen. Mark Kelly (D-AZ) — has pulled in more than $10 million over the course of his campaign. During the primary, Masters, who embraced a number of extreme positions that he has sought to temper in the lead-up to the November election, was also kept comfortably afloat thanks to $15 million in outside support from a super PAC funded by the venture capitalist Peter Thiel.

That Masters has continued to keep Trapeur on his campaign payroll, however, has largely eluded scrutiny, even as he has sought to distance himself from more prominent far-right figures who have gravitated to his campaign. Some of the payments were first uncovered in a little-noticed social media post from AZ Right Wing Watch, an anonymous Twitter account, shortly after American Virtue hosted a July launch event in Tampa at which Trapeur delivered opening remarks.

In an email to Jewish Insider on Friday, Trapeur claimed that he left American Virtue “right after the event in July” and no longer works as COO, saying “it just wasn’t for me.”

Until recently, the group had been known as the American Populist Union, which drew national scrutiny for having planned an April event in Tempe that fell on the anniversary of Adolf Hitler’s birthday. In a statement to The Washington Post before the gathering, Trapeur insisted that the scheduling was simply a coincidence. “The 20th was simply due to venue pricing and availability,” he claimed at the time.

But the event was apparently too toxic even for Rep. Paul Gosar (R-AZ), who had recently faced backlash for addressing a white nationalist conference in Orlando, Fla. While he had been listed as a “featured guest” at the “American Populist Social,” which he promoted on social media, a campaign consultant later said the congressman would not be attending.

Meanwhile, Joe Kent, a far-right congressional candidate in Washington State, has taken heat for comments to the American Populist Union in which he “echoed sentiments similar to those held by many white nationalists,” according to The Associated Press. “I don’t think there’s anything wrong with there being a white people special interest group,” he told the group during a YouTube interview last March.

The American Populist Union, which launched in May 2021, has been described by the Anti-Defamation League as “a Groyper-esque group that champions anti-immigration and anti-LGBTQ+ sentiments and regards the modern GOP as a corrupt, globalist conservative establishment.”

The Groyper movement, which maintains a robust presence in Arizona, is a fringe coalition of white nationalists whose most prominent leaders include the Holocaust denier Nick Fuentes. Last year, during the inaugural conference of the American Populist Union in Tampa, attendees were heard chanting “Nick! Nick! Nick!” when Fuentes was mentioned from the stage, according to a report at the time of the event.

Trapeur, for his part, is a follower of Fuentes on Gab, the right-wing social media platform viewed as a haven for antisemites and founded by Andrew Torba, an outspoken Christian nationalist who endorsed Masters’ campaign this summer. Masters, who is not on Gab, disavowed the endorsement and claimed he had never heard of Torba, even as an audio recording later obtained by JI revealed that they had once spoken.

Before changing its name to American Virtue a few months ago, the American Populist Union had rejected mounting accusations of white nationalism and other forms of extremism. “Our purpose is to proliferate pro-Trump, pro-America First ideas,” the group wrote on Twitter this past spring. “We are not Groypers, we’re not White Nationalists, and we’re not White Supremacists.”

Last year, however, Trapeur was pictured with two leaders of Arizona’s Groyper movement, including Kyle Clifton, who has promoted antisemitic images, and Greyson Arnold, a Nazi sympathizer who once described Hitler as “a complicated historical figure which many people misunderstand.” The photo was taken when the American Populist Union conducted an interview with Arizona state Sen. Wendy Rogers, a Republican who has frequently espoused antisemitic conspiracy theories.

In March, Trapeur and Clifton were listed as attendees of a white nationalist retreat called 76Fest, which one far-right influencer has described as “Hitler Youth, without the Hitler.”

Trapeur does not appear to have used such rhetoric in his publicly available speeches and social media remarks, even as he has deployed at least one Nazi analogy. In a recent Twitter post, the young GOP activist denounced President Joe Biden as “pedohitler,” echoing comments in which Masters called Ketanji Brown Jackson, the first Black female Supreme Court justice, a “pedophile apologist.”

American Virtue says it is affiliated with the populist American Bull Moose Project, whose website claims to instruct “future leaders how to effectively campaign and legislate by exposing them to professionals in the political field.”

American Virtue, meanwhile, describes itself as “the hub of all right-wing ideas online and in person.” According to its website, the organization’s nonprofit status is currently pending as it “seeks to educate and mobilize the next generation of conservative leaders, operators and activists,” including with live events as well as a series of YouTube videos that claim “Christopher Columbus was NOT a murderer” and call for “abolishing the FBI,” among other things.

Elsewhere, the group has called for the deportation of “all illegal immigrants” as well as an “immigration moratorium,” said that “American civilization is built on Christian moral foundations” and claimed that “marriage is between a man and a woman.” It has also celebrated Viktor Orban, the Hungarian strongman who is widely admired among conservative nationalists, as well as Pat Buchanan, Richard Nixon and Joseph McCarthy.

Like Masters, American Virtue has also stressed an isolationist foreign policy approach that is skeptical of most foreign aid.

The Masters campaign did not address American Virtue or Trapeur’s involvement with the group, when questioned about it by JI. In an email on Thursday night, Katie Miller, a spokesperson for the Masters campaign, accused JI of unfairly targeting Trapeur. “Good to know you’re in the business of attacking minors,” she wrote. “You’re right, real journalists go after kids in pursuit of electing democrat elites.”

By any reasonable measure, however, Trapeur — who recently turned 18, according to an Instagram post he shared on Thursday — has positioned himself as an emerging public figure in recent years, as he has sought to reshape the Republican Party for a younger cohort of reactionary conservative activists like Masters.

In June, for instance, he criticized Donald Trump Jr., for accusing the Texas GOP of “canceling a group of gay conservatives” rather than focusing “its energy on fighting back against the radical Democrats and RINOs.”

Trapeur disagreed with that assessment, writing on Twitter, “Trump Jr. needs to change; this big tent thinking will do the opposite of what they think it’s doing.”

This article was updated on Friday afternoon to include comments from CJ Trapeur.