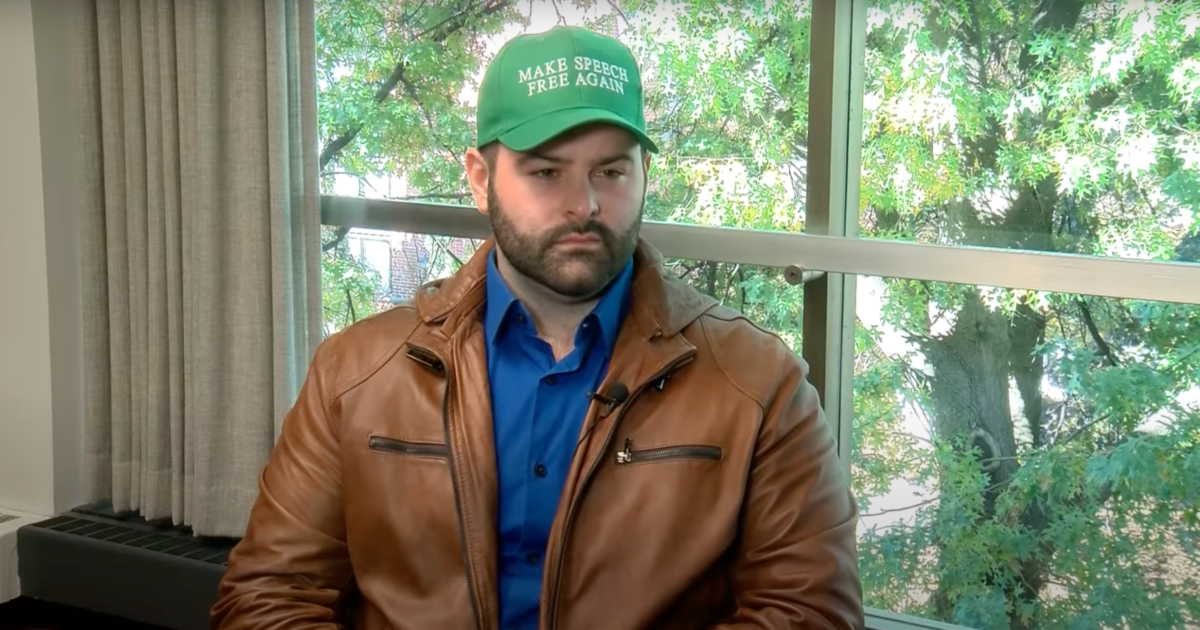 An obscure new book calling for the construction of “a parallel Christian society” to replace “the failed secular state” — co-written by the controversial founder of a social media platform for white nationalists — seems to be performing surprisingly well on Amazon.

In spite of its extremism, the self-published tract — whose title, Christian Nationalism: A Biblical Guide for Taking Dominion and Discipling Nations, reads like an ominous call to action — eked its way onto a list of Amazon’s bestselling print books on Tuesday evening, just over a week after its release and perhaps even earlier.

The book was last on a list of 100 bestsellers showcased by Amazon, but the distinction, however fleeting or vaguely quantified, represents an otherwise noteworthy testament to the growing appeal of a fringe political ideology whose followers are now mobilizing ahead of the midterm elections.

The Christian nationalist movement has recently gained a stubborn foothold in electoral politics as an increasing number of Republican candidates across the country have espoused its doctrines. Among the most high-profile avatars of the far-right religious turn is Doug Mastriano, the Republican nominee for governor of Pennsylvania, who has called the separation of church and state a “myth” and appropriated Jewish ceremonial objects on the campaign trail, among other things.

Andrew Torba, one of the co-authors of Christian Nationalism, has worked to build what he describes as “a parallel Christian society on the internet,” even as his website, Gab, has exposed a more sinister reality. The social media forum is widely viewed as a haven for right-wing extremists, open antisemites and white supremacists who have been ejected from mainstream platforms. Torba has often modeled such bigotry himself. Not long ago, for instance, he declared that Jews are not welcome in the conservative movement unless “they repent and accept Jesus Christ as their lord and savior” — a view that is echoed in his book.

In recent months, he has sought to engage in political activism beyond the confines of his social media forum, having endorsed Mastriano, a close ally, with the hope of strengthening “a coalition of Christian nationalists at the local and state levels,” as Torba explained on Gab. The social media CEO also threw his support behind Blake Masters, the Republican Senate nominee in Arizona, who believes “the founding was divinely inspired” and has drawn scrutiny for incendiary remarks.

Torba, however, proved too toxic for both candidates. Last month, Masters, who had previously expressed sympathy for Gab in a courteous exchange with Torba in January, rejected the endorsement and claimed not to know the social media entrepreneur. Mastriano, who had paid Gab $5,000 in consulting fees, said Torba “does not speak for me or my campaign.”

Meanwhile, Torba has remained active on Gab while pushing Christian Nationalism, co-written with Andrew Isker, a pastor at Fourth Street Evangelical Church in Waseca, Minn. Torba has been aggressively promoting the book to his 3.7 million Gab followers. He has also targeted users via email blasts, soliciting 5-star reviews, encouraging his supporters to buy a copy “for a friend and especially for your pastor,” and dubiously claiming that the book “has dominated the Amazon best-selling charts.”

While Amazon’s sales rankings are opaque and difficult to interpret, however, the book appears to be holding its own, according to Thad McIlroy, a publishing industry analyst who specializes in e-commerce. “Books like that give me the shudders!” he wrote in an email to Jewish Insider on Tuesday. “At any rate, I think it is doing genuinely well.”

One caveat, McIlroy said, is that Amazon’s rankings “represent sales trajectory rather than total number of copies sold in a given period,” meaning the book’s ostensible success might just be temporary. “I’ve seen in the past that if an author wants to climb quickly up the Amazon lists they try to get friends and associates to buy a lot of copies in a short period of time,” he explained. “It works.”

“But, either way, clearly a lot of books are being sold right now,” McIlroy told JI.

In an email to JI on Tuesday night, Isker said he and Torba had sold 8,500 copies “in the first five days,” all from Amazon and Gab’s online store. “God has been very gracious,” he said.

JI did not seek comment from Torba because he has said his “policy is not to conduct interviews with reporters who aren’t Christian.”

According to Amazon, the book was released on Sept. 4 — but Torba and Isker have both suggested it came out later in the month. Either way, it has received virtually no attention from the mainstream media or even the conservative press, even as a number of leading publications have documented Torba’s recent controversies.

One publishing expert, asked to assess the book’s standing on Amazon, said he was not willing to “look up the publisher” because he did “not care to be searching” Google or Amazon “for those types of materials.”

Such reservations are probably warranted. The book — which, at 135 pages, reads more like a pamphlet — is a radically caustic if ambiguously plotted attempt to formalize and add some discipline to the nascent Christian nationalist movement.

“Our primary goal is to build a parallel Christian society, economy and infrastructure which will fill the vacuum of the failed secular state when it fails,” Torba and Isker write, claiming — as a matter of course and despite evidence to the contrary — that “America is a Christian nation.”

Using fire-and-brimstone rhetoric, the authors contend that the country has lost its way, corrupted by “subversive agents of Satan” and other “demonic” forces such as “godless leftism,” “mandatory celebration of sodomy” and “the mainstreaming of child genital mutilation” — an apparent reference to circumcision.

“God is real, the Bible is True and Jesus Christ is King of Kings,” Torba and Isker assure themselves, declaring that they are only seeking to “reclaim what is rightfully ours.”

While Torba and Isker are disturbed by modern American life and culture — even denouncing “Netflix filth” and Fox News as harmful to children, whom they believe should be homeschooled — the authors are optimistic that right-thinking Americans will eventually lose faith in the “secular liberal state,” opt out of participating “in the wicked and corrupt system” and turn to “the only form of government that really matters: the local one.”

The path to redemption, however, requires some discipline. “It is not enough to simply boycott businesses that oppose our values,” Torba and Isker write. “As Christian Nationalists, we pledge to support the businesses of other Christians, strengthening our community, and helping each other prosper.”

The authors insist there is nothing inherently wrong with their loosely defined vision of an exclusionary Christian society that functions as a wholesale rejection of liberal pluralism, even if they are bound to be branded as white nationalists.

“There are plenty of Nationalist movements around the world,” Torba and Isker say, turning inevitably to Israel. “Take Zionism, for example, which is Jewish Nationalism. American politicians on both the left and right will gladly tell you that they are ‘proud Zionists’ and support the Zionist movement in Israel.”

Making no effort to mask their self-pity, Torba and Isker complain that such displays point to an insidious double standard. “It is utterly bizarre for our nation’s political leaders to be proudly proclaiming that they support nationalists in another state while at the same time demonizing the citizens who call themselves Christian Nationalists.”

“You’re an antisemite if you question sending Israel American taxpayer money to build their wall,” the authors gripe in reference to Israel’s security barrier, “while our own border is being invaded.”

Their approach to Israel extends well beyond a disavowal of foreign aid and into a twisted exegesis that posits a “misunderstanding of the relationship between biblical Israel and modern Jewish identity.” As far as they are concerned, “the historic cataclysm that was the Destruction of Jerusalem and the Temple in 70 A.D.” was “God’s conclusive, final judgment on the Old Covenant.”

“It is over,” Torba and Isker write of the Jewish claim to Israel. “No more sacrifices only The Sacrifice. His covenant and His promises exclusively belong to the true Israel, Jesus Christ.”

The authors reject the multi-hyphenate “Judeo-Christian” label, which they suggest unfairly implies a false superiority of Judaism over Christianity — a blasphemous notion. “All mankind need to believe in Jesus or they will perish in their sins, Jews included,” Torba and Isker conclude. “That is why ‘Judeo-Christian’ is such a problem. Talmudic Judaism is a new religion made up by those who rejected Jesus Christ” and “put Him to death.”

“It is not the precursor to Christianity; it postdates it,” they write.

In the same chapter, Torba and Isker call Judaism “a false religion” and write that the Talmud “says some horrible things about non-Jews (goyim),” using a Yiddish word that has frequently been appropriated by antisemitic reactionaries, including Gab users, in recent years.

But Torba and Isker are unlikely to hear such arguments in good faith. “We won’t apologize for anything that we have said or any of the work we are doing to take dominion of our country and culture for the glory of God,” they assert. “Nor should you.”