After trip to Berlin, Israel hopes West will adopt new approach on Iran

‘Talk does not stop evil. Liberal democracies must be willing and able to defend themselves,’ Yair Lapid tells German chancellor 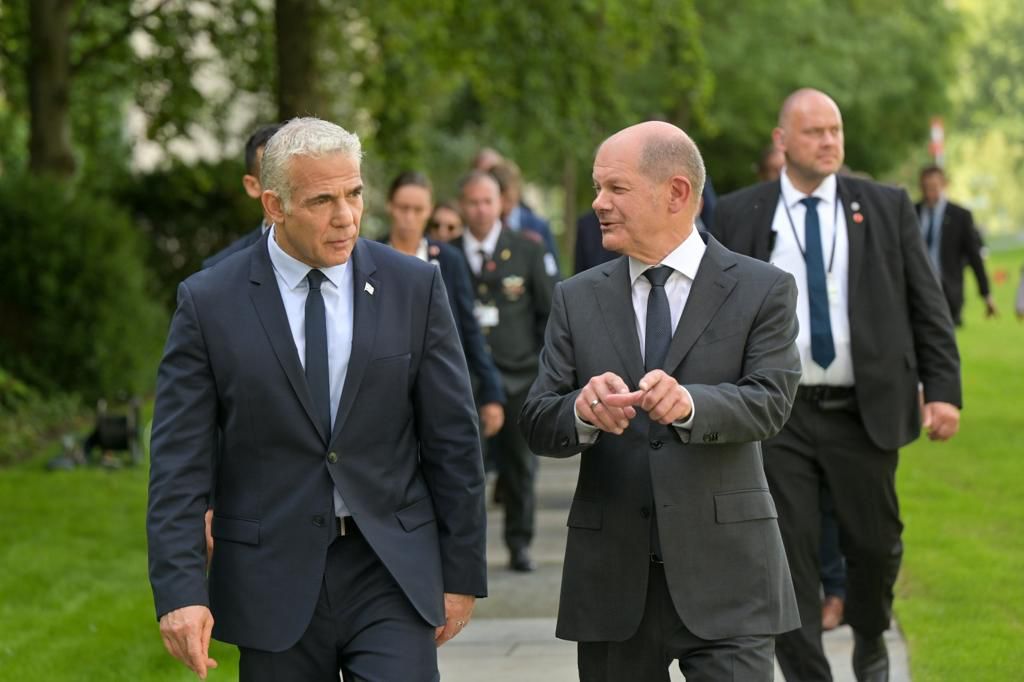 Israeli Prime Minister Yair Lapid concluded what officials described as a moving and successful visit to Berlin on Monday, increasing hope in Israel that floundering attempts to return to the 2015 Joint Comprehensive Plan of Action could pave the way for a new strategic dialogue on how to stop Iran from obtaining nuclear weapons.

On Saturday, Germany, together with France and the United Kingdom, issued a statement highlighting serious doubts about Iran’s intentions to revive the 2015 Joint Comprehensive Plan of Action. There have also been signs in the U.S. that President Joe Biden will tamp down efforts to seek support for a return to the deal ahead of the November midterms.

“It is important that Iran does not develop a nuclear bomb,” German Chancellor Olaf Scholz told reporters in a joint press conference with Lapid on Monday, adding that it was unlikely that an agreement would be signed between Iran and the West in the near future. “We remain patient, but we are clear, we have to make sure Iran does not acquire nuclear weapons.”

In his public remarks at the Bundeskanzleramt, the Chancellor’s office, on Monday, Lapid welcomed the new position from Europe, saying, “it is time to move past the failed negotiations with Iran.”

“They cannot and will not achieve the goal we all share – to stop Iran getting a nuclear weapon,” he emphasized, adding that he and Scholz had discussed a new strategy to stop Iran’s nuclear program.

“A nuclear Iran will destabilize the Middle East, and create a nuclear arms race that will endanger the entire world,” Lapid continued.“Returning to the nuclear agreement under the current conditions would be a critical mistake.”

A senior Israeli official, who briefed the press following the meeting between the two leaders, said the Americans and Europeans had expressed to Israel in “definite terms” that they have many reservations about the possibility of returning to the original nuclear agreement, which Israel has long campaigned against, calling it a bad deal that will do little to prevent Iran from becoming a nuclear power.

Asked what the next step might be, the official said the goal was to “hold a strategic dialogue” with Western powers that would lead to a “longer and stronger agreement” and put the threat of military action on the table if Iran continues to destabilize the region and work towards nuclear armament.

“The only thing that will push them is a credible military threat,” said the official. “That is what happened in 2015, that is what brought the Iranians back to the table and the agreement was signed in record time. What we need now is the Americans to put a credible threat and create a better agreement – with no sunset clauses.”

“Israel does want an agreement,” the official emphasized. “But we want a good agreement.”

In addition to Iran, Lapid and Scholz discussed ways Israel could assist Germany, and Europe, with the looming energy and economic crisis as the continent heads into the winter months. In an effort to push back against Russia’s invasion of Ukraine, Europe has sharply reduced its reliance on Russian gas sources, causing severe shortages; Israel, which recently, together with Egypt, signed a deal to send natural gas to Europe, could become an alternative supplier in the future.

Scholz said the two leaders also discussed ways to mitigate the impact of the war, including the possibility of Germany purchasing the Israeli-developed Arrow 3 defense system.

“Some will certainly say that a military partnership between Germany and Israel is a historical irony,” Lapid said. “I consider it to be proof that we have drawn the necessary conclusions from the past: Talk does not stop evil. Liberal democracies must be willing and able to defend themselves.”

In addition to his meeting with Scholz, Lapid also met with German President Frank-Walter Steinmeier and Foreign Minister Annalena Baerbock during the trip. The Israeli leader thanked Steinmeier for standing with Israel in the fight against antisemitism, and for his work to reach an agreement with the families of the victims of the terrorist attack that took place at the Munich Olympics 50 years ago last week.

With Baerbock, the two spoke about continuing cooperation between Israel and Germany, and tightening bilateral ties in the fields of security, economy, technology, and cooperation in the international arena.

As well as his diplomatic meetings, Lapid was accompanied to Germany by a group of five Holocaust survivors, a step seen by some as a response to comments made last month, also in Berlin, by Palestinian Authority President Mahmoud Abbas that Israel was committing “50 Holocausts” against Palestinians.

During Monday’s  press conference, Scholz, who condemned Abbas’s comments in the days after they were made, reiterated that it was “unacceptable.” “It is a crime against the victims of the Shoah who have suffered so much,” he said, adding that he was happy “to have opportunity today to speak to Holocaust survivors.”

Later in the day, Lapid – himself the son of a Holocaust survivor – and Scholz heard the personal testimonies of the five survivors at a special meeting at the historic Wannsee Villa, just outside of Berlin – the place where the Nazis finalized the plan for the Final Solution for the Jews.

With a great deal of emotion, the five survivors – Pnina Katzir, Abraham Roth, Shosh Trister, Yisrael Milah and Zvi Gill – told their incredible stories of suffering and survival to an attentive Scholz and an emotional Lapid.

“My grandfather, Bela, died in a concentration camp, but my father survived and raised a family, and they established a country,” Lapid told Scholz during the meeting. “That country is proud to be here today. I thank you, my friend, for being here with us – it takes a fair amount of moral courage to do so.”