U.S., Israel closer than ever on issues such as Iran, Palestinians, says ambassador 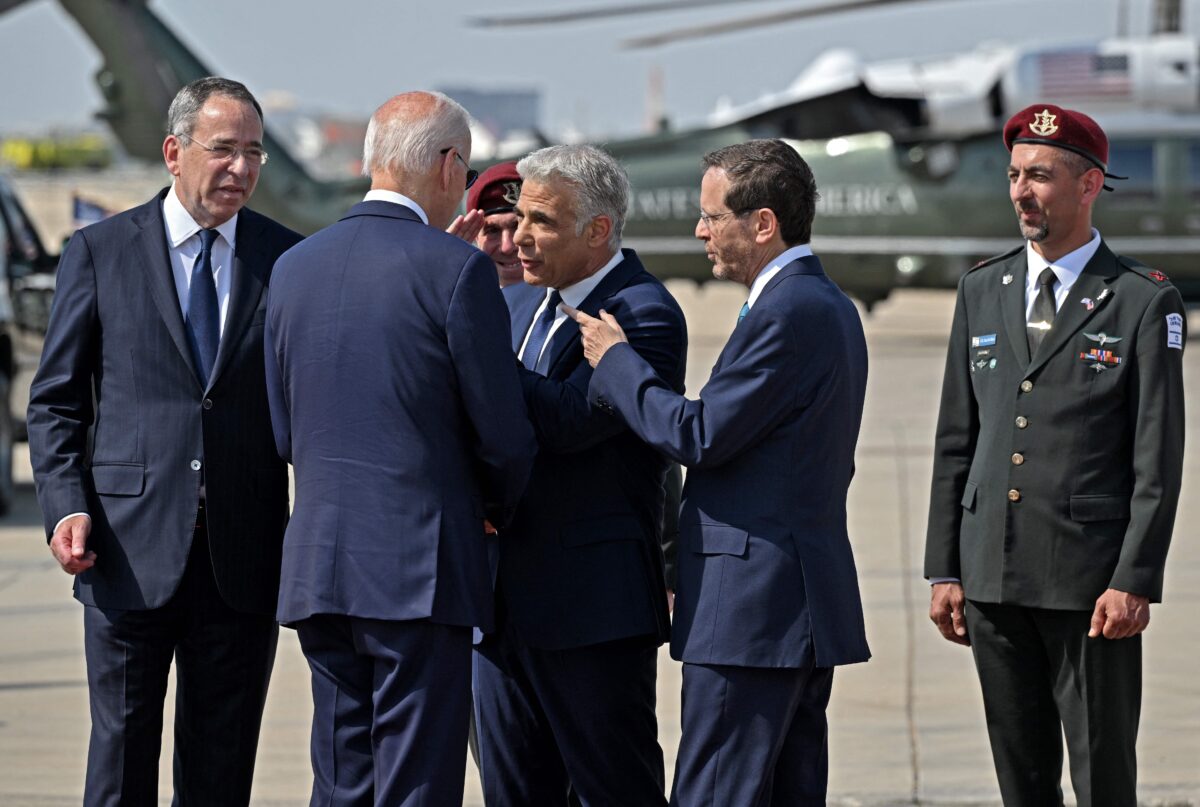 Hailing President Joe Biden’s trip to Israel last week as a huge success, U.S. Ambassador to Israel Tom Nides told Jewish Insider on Wednesday that the two allies are more aligned than ever on previous flash-point issues and said he believed that the visit had changed Israeli public opinion towards the U.S. president and the current administration.

“I think people love Joe Biden here,” Nides said in a phone interview. “I think if you now ask the average Israeli, ‘Do you believe that Joe Biden cares about Israel?’ the answer would be 100%, yes.”

While his two days in Israel passed with many encouraging platitudes and little controversy, some analysts reflected on the trip as underwhelming in comparison to visits by previous presidents and others pointed out that differences still remain between the U.S. and Israeli leadership on geopolitical matters such as curbing Iran’s attempts to obtain nuclear weapons or finding possible solutions to the Israeli-Palestinian conflict.

Nides, who has been serving as America’s top diplomat in Jerusalem since last December, told JI that on thorny issues where the two allies have clashed in the past, the sides were “closer than ever in conversations,” both in public statements and behind closed doors.

On Iran, he said that Biden was very clear that “he would like a diplomatic solution to the crisis.”

“He’s been clear about that from the day he ran for president,” Nides said. “But he also said he is not going to compromise; he made it very clear he’s not going to stand by and let the Iranians get a nuclear weapon.”

“[Biden] has been unbelievably consistent on this – yes, we would like a diplomatic solution, we’re not going to let the Iranians obtain a nuclear weapon and certainly we will not tie Israel’s hands,” the ambassador explained. “We have Israel’s back and everyone knows that.”

At last Thursday’s press conference, however, Israel’s newly installed Prime Minister Yair Lapid emphasized that words and diplomacy alone would not prevent Iran from attaining nuclear capabilities. “The only thing that will stop Iran is knowing that if they continue to develop their nuclear program the free world will use force…. The only way to stop them is to put a credible military threat on the table,” Lapid stated.

Regarding the decades-old intractable conflict with the Palestinians, Nides underscored points made by the president during his two-day trip, saying, “If you want to keep Israel a strong, democratic Jewish state, it is imperative that we keep a vision of a two-state solution alive.”

After spending Thursday with Israel’s leaders, Biden on Friday visited a Palestinian-run hospital in East Jerusalem and met with Palestinian Authority President Mahmoud Abbas in Bethlehem, announcing a new multimillion-dollar U.S. aid package aimed at improving daily life and restoring ties with the Palestinians, which became strained during Trump’s administration.

Nides said that the issue of forging peace with the Palestinians was raised multiple times with Israeli leaders, with an emphasis on keeping the vision for a two-state solution alive.

“Lapid reaffirmed his position on a two-state solution,” Nides pointed out, saying that both Lapid’s recent phone call to Abbas and a visit by Israeli Defense Minister Benny Gantz to the Palestinian leader a week before Biden’s arrival were seen by the U.S. as a concerted effort by Israel to “set the table for Biden’s trip.”

“These were very important,” he said, underscoring that despite the obstacles and the difficulties, it was important “not to give up.”

“We have our position to basically continue talking and articulating the importance of the two-state solution,” said Nides, emphasizing that the financial aid to health, welfare and educational institutions for Palestinians and other small steps, such as enabling movement and providing access to 4G technology, were all important.

“We’re not delusional [about peace], we’re not sitting around and being dreamy,” he continued. “But you have to take care of the things on the ground and that’s what Joe Biden is doing, that is what I’m doing every day – trying to see how we make things just a little bit better for the Palestinian people.”

Nides, who did not accompany the president on the second leg of his trip to Saudi Arabia, added that it was important “not to lose sight of the bigger picture of the political solution.”

“You know, I give the former administration enormous credit for the Abraham Accords that has changed the equation in the Middle East,” said the ambassador of the 2020 normalization agreements signed by Israel and four Arab countries. “There are always opportunities to change the equation.”

Nides said that the image of a teary-eyed Biden kneeling down for more than 20 minutes beside two elderly Holocaust survivors at Yad Vashem World Holocaust Remembrance Center hours after his arrival in the country was one that would stay with Israelis for a long time.

“I mean, that was Joe Biden, that picture,” said Nides. “Thirty years from now, we’ll still be talking about what Joe Biden did – it was so not scripted, it was not scheduled, I had no idea he would stay there for that long.”

“I think there is a sense that people want authenticity and Joe Biden is authentic, and he authentically loves Israel,” the ambassador continued. “I’m not a pollster, but I would be very hard-pressed to believe that the people did not come away with an unbelievably positive impression of Joe Biden after this trip.”