Is a two-state solution still viable?

Biden says he wants to keep the vision for a two-state solution alive, but support for the concept among Israelis and Palestinians is at a low point 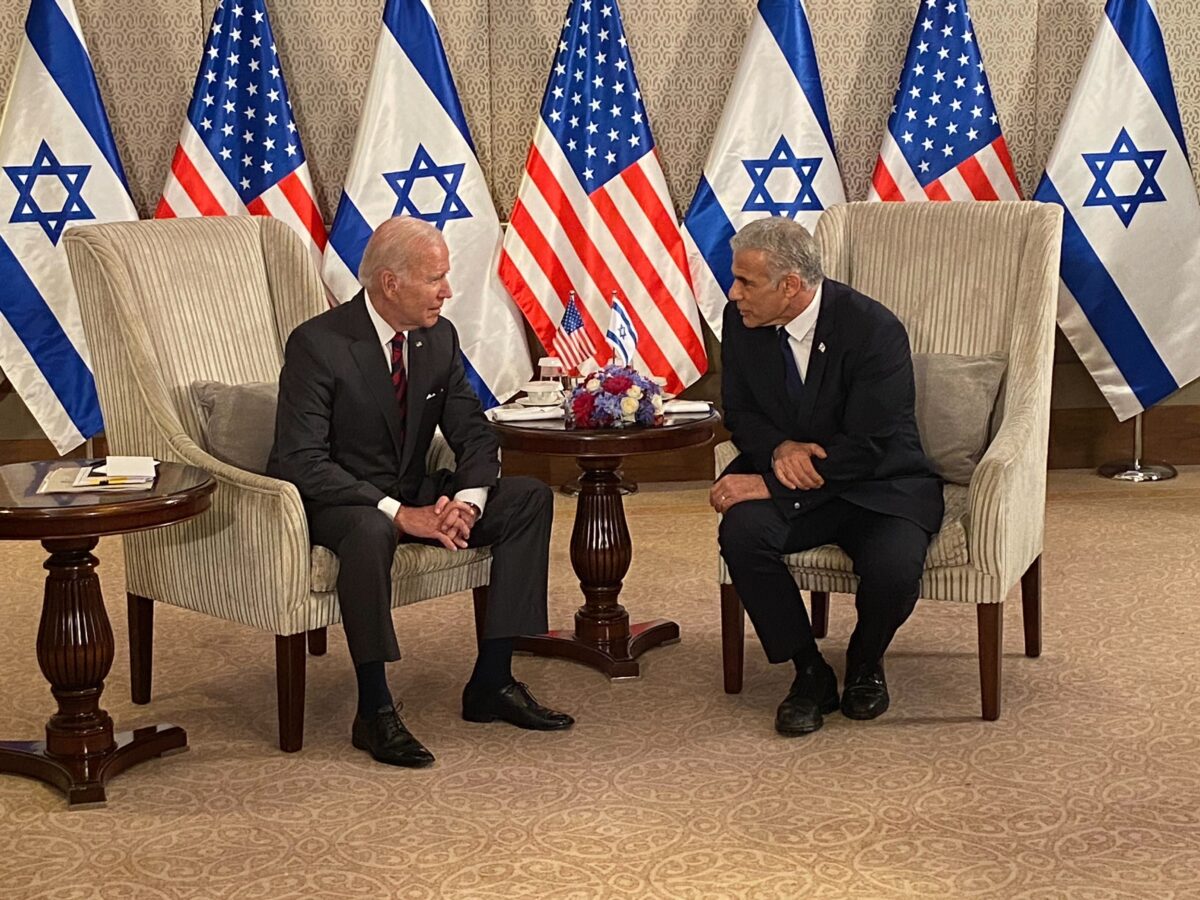 Can Merey/picture alliance via Getty Images

Israeli Prime Minister Yair Lapid and President Joe Biden speak to the media after their meeting.

When President Joe Biden visited Israel and the West Bank earlier this month, he emphasized his administration’s unwavering commitment to two states — one Israeli, and one Palestinian — as a solution to the decades-old intractable conflict.

The tagline, which he repeated in Jerusalem to Israelis and in Bethlehem to Palestinians, was noble, but for many Israelis and Palestinians, who see no real push or effort to kick-start a process that would bring about this solution, the words rang hollow.

In the wake of the president’s trip, and a subsequent interview with U.S. Ambassador to Israel Tom Nides, who spoke about the need to keep alive the vision for a two-state solution, Jewish Insider spoke to two Israeli and two Palestinian experts working in, or monitoring, the peace-building field – some for decades – about the viability of the “two states for two people” model.

Recent polling of Israeli and Palestinian public opinion on the topic is mixed. An Israel Democracy Institute study carried out last month, found that a minority of Israeli Jews would support a two-state solution if it was put forward as part of a peace agreement today. A Geneva Initiative survey asking Israelis if they support or oppose launching negotiations with Palestinians on the basis of a two-state solution found around 51% still in favor.

Pollster and political analyst Dahlia Scheindlin told JI that support for a two-state solution on both sides was its lowest ever.

“I don’t recall ever seeing support [for a two-state solution] as low as it is now,” she said. “Based on current developments, we’ve reached a point where, politically, both sides have a government that is either completely committed to avoiding that solution or is completely incapable of delivering it. The public on both sides is deeply aware of this.”

A proponent of an alternative concept of a confederation between Israelis and Palestinians, Scheindlin, said, “The test of history is in, we’ve tried many times to reach a two-state solution and we have not been able to, based on the vision that was worked out.”

When most people discuss the concept of two states for two peoples, it is based on some variation of the mutual recognition reached between the Israeli government and the Palestine Liberation Organization (PLO) in the 1993 Oslo Accords. With some clarifications and modifications during further peace negotiations, the model basically refers to two nation-states based on the 1967 war cease-fire line, with some exchanges of territories and relocation of some Israeli settlers in the West Bank.

With that in mind, JI asked the following experts and activists on both sides their views on the matter. These interviews have been lightly edited for space and clarity.

I distinguish between three different dimensions. The first is the physical feasibility of two states – can we separate the two populations according to the parameters laid out by the international community in December 2000 or in the 2008 Annapolis process? The answer is yes.

I have just published new research about the impact of the Israeli settlements on the feasibility of a two-state solution, and I can tell you that on the ground it is still feasible. Almost 80 percent of Israelis who live beyond the pre-1967 border line live very close to it. We can keep 80% of the Israelis where they are without harming the chances of a contiguous Palestinians state. I know the Palestinians would accept this idea, and although we would still need to evacuate 30,000 Israeli families, Israel has the ability to do it.

The second, the political feasibility. This faces two main problems. The biggest is the Israeli position not to resume negotiations and not to deal with Jerusalem as an issue of the permanent-status agreement. This is not only the agenda of [former Prime Ministers] Benjamin Netanyahu and Naftali Bennett, it is also the agenda of [current Prime Minister] Yair Lapid, [Defense Minister] Benny Gantz, [Justice Minister] Gidon Saar and [Finance Minister] Avigdor Lieberman. The Israeli demands do not match the Palestinian position. Also on the Palestinian side, we have a big problem with the PLO and the divisions in the Palestinian Authority.

Among the Palestinian public, there is still support for a two-state solution, but more and more people do not believe it is possible. Younger Palestinians increasingly support the idea of a one-state solution because they believe that it will be with equal rights – one-man, one-man vote. We asked the Israeli public about having one state, however, and 80% oppose the idea.

Q: If you believe that two states is still possible, how can it be achieved?

If we want to renew peace negotiations and the idea of a two-state solution, then we need to take many steps. We need to strengthen the Palestinian Authority and the Palestinians must hold elections for the parliament and for the presidency. We also need to stop the Israeli expansion of the settlements and many things on the ground. We would need at least one year to deal with all this. In parallel, Israel must talk with the Arab world and both sides must talk to the U.S. and other donor countries about their participation in implementing this process.

As a Palestinian living in the West Bank, I have to be realistic. I don’t think the two-state solution is viable, not only because the Israeli occupation as it still exists is so obvious, we see it every day and it will take time to dismantle its institutions, but also the fact that since 1995, the assassination of [then-Israeli Prime Minister Yitzhak] Rabin, the governments of Israel have been led by the same people who incited against Rabin. We have seen settlement expansion, increased violence against Palestinians and negotiations with the Palestinian Authority stopped completely. We could keep blaming the Palestinians for it, but after the assassination of Rabin, the policy of the Israeli government completely changed.

Those who support a two-state solution are no longer the majority and because it is no longer viable or realistic, we are moving to a one-state solution. For young Palestinians, the civil rights model is the only one that works, especially in a place where there is apartheid, or the rights of Palestinians are not recognized.

Inside the Palestinian and Israeli peace-building community, we cannot move away from the two-state solution – it is still in our language and in our communication with our donors because this is what we do. As a peace-building community, we think there is the possibility of a joint struggle that could make the two-state solution viable, but we need strong partners on both sides that will join forces to change the status quo.

Today, in 2022, this idea is no longer feasible. No one believes in the two-state vision and, really, in the field, the situation is changing all the time.

First, you have Gaza and the West Bank, these are two separate entities. If tomorrow, you make peace with [Palestinian Authority President] Mahmoud Abbas, then, by default, you would end up with a three-state solution because while you might have peace with the West Bank, you would not have it with Hamas in Gaza.

Secondly, there are around 600,000 Israeli Jews that live in the West Bank and East Jerusalem; that is a sharp contrast to the 130,000 Jews that lived there 30 years ago when Oslo was launched.

In addition, the Israeli and Palestinian economies and civilian infrastructure are more intertwined than ever before, making it much harder to implement a two-state solution. We hear a lot of talk about economic peace and confidence-building measures such as opening the Ramon airport for Palestinian travel or giving Palestinian laborers more permits to work in Israel, these are all essentially good things and keeping the Palestinians calm, but in reality, they are leading us to one state because it is making the two societies ultimately inseparable.

There are two strategic alternatives that almost no one in Israel’s Jewish society is talking about. The first option is joint nightmare for both peoples and this is the one-state solution, which I call a one-state reality. It is not a real solution, but a reality that will happen if we continue with what we have. The Palestinian Authority will continue to weaken, there will be assimilation between Israel and the West Bank, and we will end up with one state. It will end the Zionist vision because we will either not be democratic, or we will have to give all the Palestinians their rights to vote. Eventually, too, the Jews will become the minority between the Jordan River and the Mediterranean Sea.

On the other side, too, there are not many Palestinians or Arab Israelis that believe in a two-state solution. You see polls that more and more Palestinians support a one-state solution. They say if the vision of two states is not serious, then at least give me social rights and civil rights, even if those concepts might never be totally complete.

It might still be possible now but it’s definitely not going to be possible in the future, and the determining factors for this possibility are the political reality in Israel and the reality on the ground, which is related to settlement expansion.

At least in the past, before the period of President Trump, the American administrations would work to discourage Israel from certain settlement expansion. They used to come up with verbal criticism of any major expansion of settlement, but starting with Trump, they stopped that rhetoric and they started to encourage the expansion of settlements. We even had an American ambassador to Israel who publicly encouraged settlement expansion. After Trump, the current administration did not reverse this policy, so, you cannot express support for a two-state solution if you are not doing anything to support such a position.

Biden’s announcements about financial aid and other measures are good but it is not good enough. It is always good to relieve certain aspects of our difficult life but that will not move things forward positively at all. What Israel is trying to do is to maintain the status quo. Israel has created a very complicated situation that fits with their interest, and they have been successful in maintaining it – so as long as Israel continues to maintain it, we will continue living the kind of reality that we have so far.