Sixty young Israelis and Moroccans worked together in Marrakesh last week to build sustainable and cultural bridges between their countries. 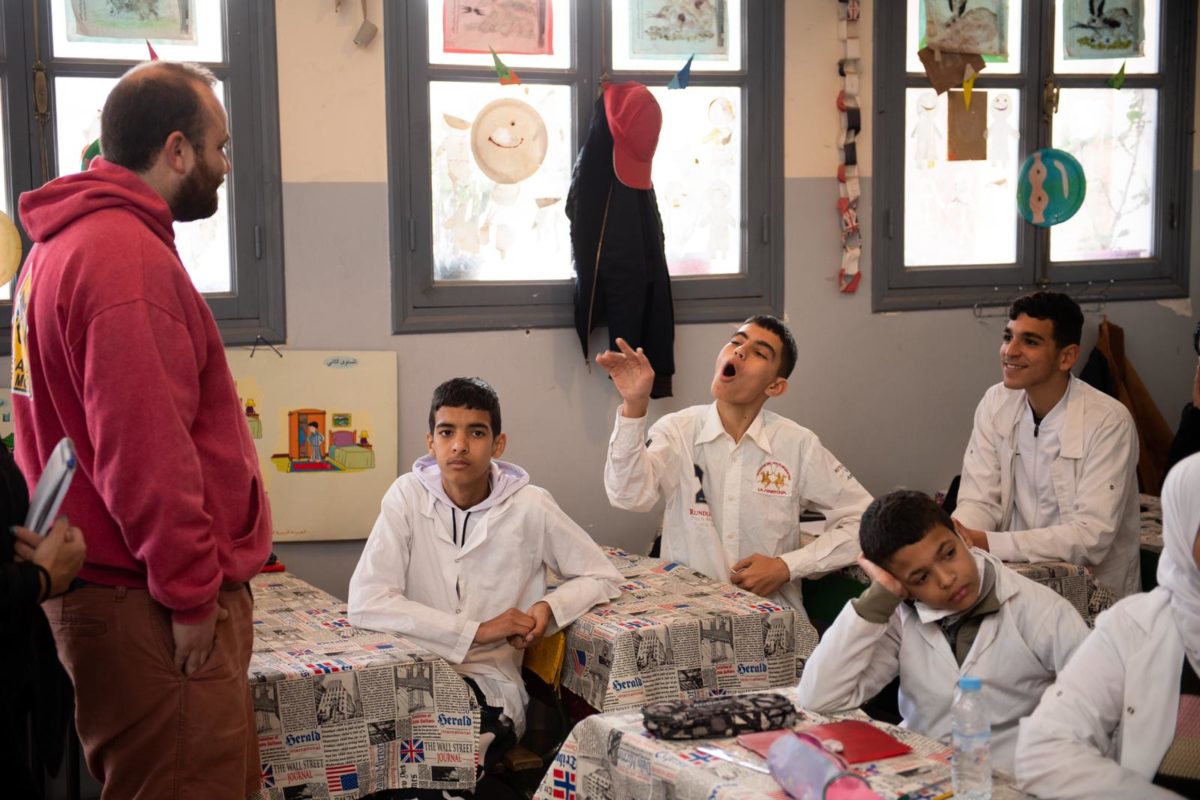 Elad Kakon communicates with non-hearing students during a visit to the class for the Deaf at the École de la Princesse Lalla Amina school in Marrakesh, Morocco on Feb. 28, 2022.

In a simply decorated classroom on the far side of a dusty schoolyard deep inside Marrakesh’s bustling Medina, or old town, about a dozen Deaf schoolchildren watched with amusement last week as a small group of well-educated — and usually articulate — young hearing Israelis and Moroccans attempted to communicate with them.

Using very basic sign language, or at least those signs shared by the Hebrew and Moroccan versions of the visual-manual modality language, the children seemed not to know or care that they were a part of something very remarkable, even historic.

As the governments of Israel and Morocco work to normalize relations on a diplomatic level following a December 2020 agreement to establish full and open ties, grassroots movements and civil society organizations are working to build and strengthen the connection between the two countries, already deeply linked via long-standing cultural roots.

The group visiting the École de la Princesse Lalla Amina school and the class for the non-hearing, which is operated by an independent local charity, were participants in the Leaders of Tomorrow Summit and one of four teams competing in a low-tech hackathon challenge to create sustainable and cultural people-to-people projects that aim to build bridges between their countries.

“Our main goal is to leave no one behind,” Oumaima Mhijir, 29, a participant from Morocco, later told hackathon judges in a five-minute pitch about Project Ismaani (translated from Moroccan as “listen to me”). “We want to create a fellowship for good that aims to enhance cultural understanding between our two people.”

Elad Kakon, 36, an Israeli on the same team, told Jewish Insider that the team’s decision to focus on the non-hearing community came about after Mhijir, who helped established, through a local nonprofit, Marrakesh’s Sign Language Café, appealed to the Israeli participants for assistance with the charity that runs the school for the Deaf. When Kakon revealed to the group that his Moroccan-born father, who grew up in Casablanca, was also non-hearing, the group hit on the idea of building a bridge between the two tiny and often sidelined communities.

“It’s a subject that’s very close to my heart,” said Kakon, who patched in his father from Israel via FaceTime so he could converse with the schoolchildren in Moroccan sign language. “I think there’s a lot Israel’s non-hearing community can contribute to the community in Morocco,” he added after the visit to the school.

Both Kakon and Mhijir described to JI that they decided to participate in the four-day conference in Marrakesh because they wanted to learn more about the other country and connect with real people.

“It’s amazing what is happening here, and I think we’ve formed some true friendships,” Kakon, who lives near Ashdod and runs educational projects in Israeli schools, said of his encounters at the conference.

Mhijir, director of development for an NGO that works with children at risk, was pulled into the initiative by a colleague who volunteers with the Mimouna Association, a cultural non-profit created by young Muslim students to promote and preserve Jewish heritage in Morocco.

“I don’t know much about Jewish culture or Judaism as a religion, and I know even less about the Israeli people,” she told JI. “But I was aware of the Moroccan-Jewish relationship, I knew that Jews and Muslims were once neighbors here, that they lived together in many Moroccan cities, and I also always knew that there were neighborhoods dedicated to the Jews.”

She said she was also cognizant of negative perceptions in Morocco of Jews and particularly of Israel because of its conflict with the Palestinians but maintained that “no religion, no human being, no one from any culture should be treated or perceived that way.”

Organized by the Tel Aviv-based NGO ISRAEL-is, which educates and trains young Israelis to conduct meaningful encounters with their international peers, in collaboration with Mimouna Association, the summit brought together some 60 highly educated young Israelis and Moroccans, a mix of students and professionals.

The Israeli group was comprised of individuals selected by the Edmond de Rothschild Foundation, Kulna, an NGO that promotes Moroccan Jewish heritage and culture in Israel, and some independent participants, while the 30 Moroccan participants were mostly volunteers involved with Mimouna’s activities.

Mimouna’s president, El Mehdi Boudra, who established the organization in 2007, said there were some negative views of Jews, and of Israel, in Morocco but the normalization agreement, which is linked to the broader Abraham Accords with an additional three Arab countries, has served to bolster Mimouna’s profile and has made working on Jewish-related projects in the country much easier.

“What we are doing in Morocco is not about the Abraham Accords, but it has definitely facilitated things for us,” he said, adding, “There are one million Jews of Moroccan descent in Israel and around the world and they are our brothers.”

“Even though they have been separated from us for many years, they have kept their Moroccan-ness, people here know that, and we are really proud of Moroccan Israelis,” Boura continued. “This is what makes the connection between us and Israel very special.”

Boura said he was aware of some negative views of Jews and of Israel in Morocco but, he added, “It’s all about education, and many people here never had the chance to meet Jews. We just need to show them that it’s OK.”

And, whenever people challenge him about his work with the Jewish community, Boura told JI that he sends them to talk with their grandparents – “99 percent of the time they come back to me and have changed their perception about Jews,” he said.

Of the meet-up with Israelis last week, Boura said the collaboration with ISRAEL-is was so important.

“It was the first time that young people from Morocco and young people from Israel are coming together on the civil society level,” he said. “We have seen official agreements being signed, which is really great, but in the long run, for sustainability, it is the relation between people that will make this work.”

Eyal Biram, co-founder and CEO of ISRAEL-is, told JI that he created the Leaders of Tomorrow Summit following the Abraham Accords’ signing to harness the new relationships that were forming.

“After 25 years where there wasn’t any kind of peace agreement between Israel and Arab countries, we realized that we needed to find a way to celebrate this historic achievement, but we had zero connections on the other side,” Biram, 30, said, describing how his team set to work sending messages on social media to influencers in the UAE.

“Two days later, we held a Zoom meeting,” he continued. “We understood then that something really special was happening, that there was an Arab country opening its heart to peace and the people there were looking to connect with young people in Israel.”

Since then, ISRAEL-is has forged partnerships with groups of young Bahrainis and Emirates – two of the other Arab countries that recently normalized ties with Israel – and now Moroccans.

“I really hope that we can build similar platforms, not only in Morocco, the Emirates and Bahrain, but also one day with Saudi Arabia and other places in the Middle East,” said Biram, who founded ISRAEL-is in 2017 to train a new generation of informal ambassadors for Israel. “In order to make real peace, you need real action.”

For most of the conference participants, it was their first time meeting someone from the other country, and the discussions were fun but intense, focusing on the place of the Jewish community in Moroccan history, religious and cultural similarities and differences, as well as some politics.

Run mostly in English, with a smattering of Hebrew, Arabic and French, the central activity was developing the ideas from the hackathon, which will be presented to Israeli President Isaac Herzog in May when the Moroccan delegation visits Israel. Projects focused on reciprocal tourism, arts and culture, as well as Project Ismaani for the non-hearing communities, which turned out to be the judge’s favorite.

At the school for the Deaf, where the mixed tongues of English, French, Hebrew, Moroccan, Arabic were inconsequential, volunteer teacher Hafsa Ait Sidi also made clear that the religious and national differences made little difference too.

“When the non-hearing community in one country gets to meet non-hearing people from another country, we do not care about politics or religion, we care about human beings and about the interactions,” she told the hackathon team.

She said she would be delighted to participate in their project and was looking forward to connecting with Deaf and hard-of-hearing Israelis.

This story is part of a series on the Israel-Moroccan relationship developing following the signing of the normalization agreement in December 2020. Eglash was a guest of the ISRAEL-is at the Leaders of Tomorrow Summit in Marrakesh.