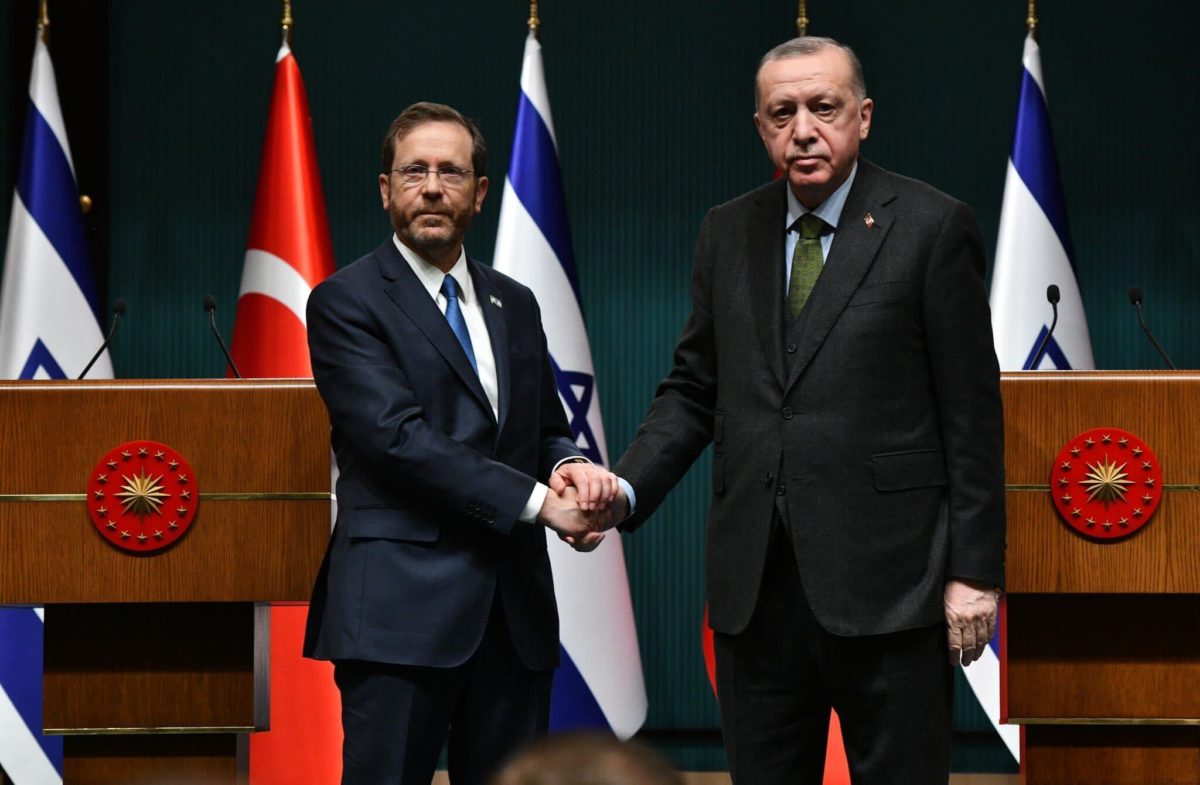 ANKARA, Turkey — Israeli President Isaac Herzog was greeted with a 21-gun salute and a military band playing Israel’s national anthem, “Hatikva,” at Turkish President Recep Tayyip Erdoğan’s 1,150-room presidential palace in Ankara on Wednesday. The visit — the first to the country by an Israeli leader in 14 years — is being touted by both parties as a first step in restoring diplomatic ties.

Upon arriving in Ankara on Wednesday afternoon, Herzog, who was accompanied by his wife, Michal, laid a wreath at the tomb of the founding father of the Republic of Turkey, former President Mustafa Kemal Ataturk, and was greeted by Erdoğan in a special ceremony at the national palace.

Following the official ceremony, the two leaders met privately, reportedly discussing ways to reignite bilateral diplomacy, enhance economic and trade ties between the countries, and also global and regional issues, including how to work together to end the conflict in Ukraine. The two presidents also discussed strategies for avoiding future disputes or tensions between their countries, a source involved in the talks told journalists.

“I believe this historic visit will be a turning point in relations between Turkey and Israel,” Erdoğan told Israeli and Turkish reporters following the private meeting. “Strengthening relations with the State of Israel has great value for our country.”

Erdoğan also expressed concerns for Israel’s treatment of the Palestinians, as well as emphasizing the sacred place of Jerusalem’s al-Aqsa Mosque in Islam. He condemned antisemitism, saying that the pandemic had increased all forms of racism and that he would work to combat such hate.

“I believe that the coming period will bring new opportunities for both regional and bilateral cooperation,” he said, adding, “I hope this important visit, taking place after so long, will provide an opening for future joint opportunities.”

“The relations between our peoples are ancient, with strong historical, religious and cultural roots,” he continued. “A long line of exalted Jewish leaders, rabbis, poets, sages, merchants and entrepreneurs are part of this country’s history.”

While Herzog’s position as Israel’s president is largely ceremonial, he has been actively engaged in diplomacy as an envoy of Prime Minister Naftali Bennett and Foreign Minister Yair Lapid. Herzog told the press that his trip to Turkey was completely coordinated with both Bennett and Lapid.

Erdoğan has for months been signaling a desire to improve relations with Israel, speaking via phone with Herzog at least three times since the Israeli leader took office in July. His efforts to resume ties — which faltered after the Mavi Marmara flotilla incident in 2010, in which Israeli forces killed nine Turkish activists attempting to reach the Gaza Strip — come as Turkey faces a severe economic crisis and as it attempts to upgrade its diplomatic ties in the region.

Turkey also finds itself in a similar position to Israel on the Ukraine-Russia conflict, balancing relations between both states with the potential of becoming a key mediator. Later this week Russian Foreign Minister Sergei Lavrov and his Ukrainian counterpart, Dmytro Kuleba, are set to meet for the first time at the Antalya Diplomacy Forum being held in Turkey.

On the Israeli side, the rapprochement is being viewed with some caution. Erdogan broke off formal diplomatic relations with Israel following the 2010 flotilla raid.

Diplomatic ties between Israel and Turkey resumed in 2016 after Israel’s discovery of natural gas off its coast and in an attempt to route the gas via Turkey to Europe. They grew strained again in 2018, after the United States moved its embassy from Tel Aviv to Jerusalem, sparking protests along the Gaza border, where 61 Palestinians were killed in clashes with Israeli troops. The violence prompted Turkey to urge Israel’s ambassador to leave the country, forcing him to undergo a security check at the airport that was broadcast on social media.

Israel’s resistance also stems from attempts to avoid damaging the strategic alliance it has forged in recent years with Greece and Cyprus, countries that have historic tensions with Turkey. Herzog visited both countries over the past two weeks to convey a message that Israel wants the close ties to remain.

Regardless of past tensions and current concerns, Arad Nir, foreign affairs commentator for Israel’s Channel 12 News and a longtime Turkey enthusiast, told Jewish Insider that Herzog’s visit to Ankara was significant.

“After years of attacks, accusing Israel of murdering Palestinians and killing Palestinian babies, this is a personal turnaround for Erdoğan,” said Nir, explaining that it stemmed from a “triangle of interests” – global geopolitical concerns, economic factors inside Turkey, and, most significantly, the gas discoveries in the Mediterranean, which has aligned Israel with Greece and Cyprus over Turkey.

“The world is changing all around and Turkey must now rethink its regional position,” he added. “The Turks have now come to the conclusion that relations with Israel must change, especially because the route from Ankara to Washington goes through Jerusalem.”