Several Republicans opposed the bill, claiming it could be an obstacle to efforts to combat antisemitism 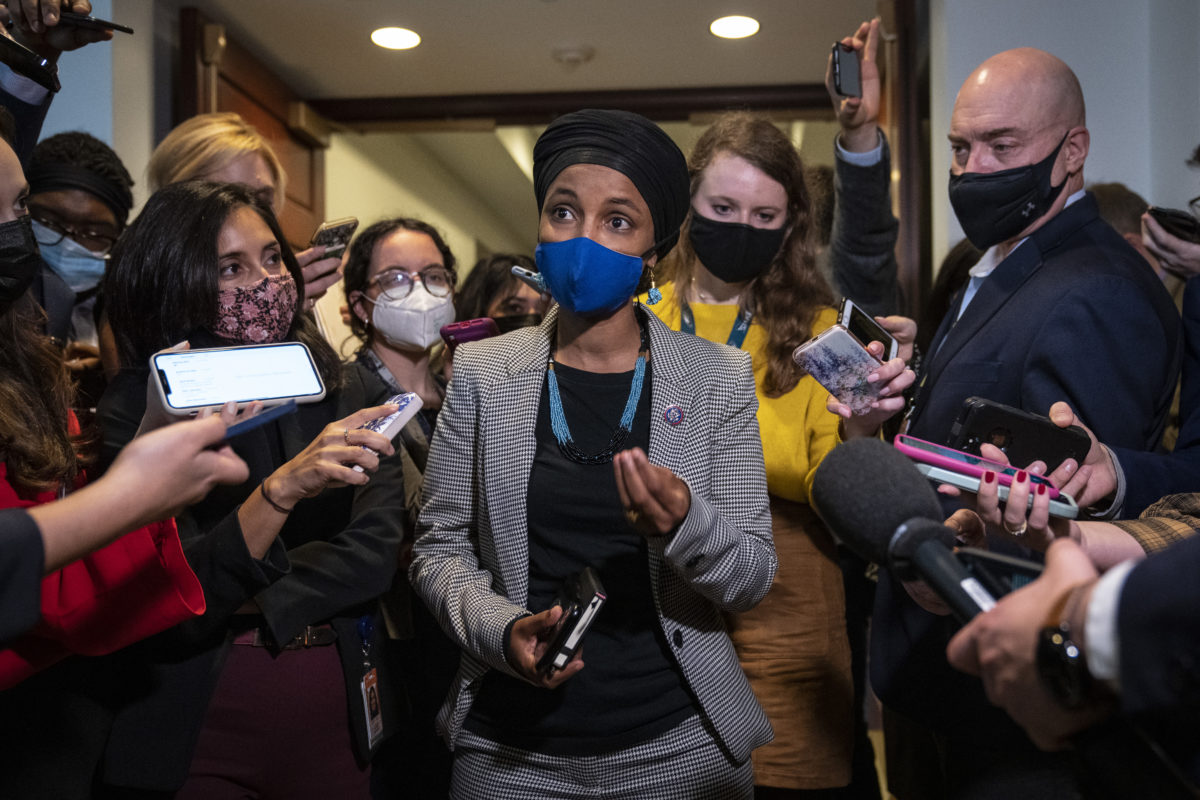 Rep. Ilhan Omar (D-MN) speaks to reporters as she leaves a meeting with Progressive House Democrats at the U.S. Capitol on Capitol Hill October 28, 2021, in Washington, D.C.

House Foreign Relations Committee members sparred over the proposed creation of a State Department office and envoy to combat Islamophobia in a committee meeting on Thursday.

The new legislation, introduced by Reps. Ilhan Omar (D-MN) and Jan Schakowsky (D-IL) is modeled after the special envoy to monitor and combat antisemitism, a position Congress created with unanimous support in both chambers in 2004, and upgraded to ambassador rank in 2020 with just one member of Congress — then-Rep. Justin Amash (L-MI) opposed.

Rep. Scott Perry (R-PA) said that the office would “invariably become a taxpayer-funded office for [propagating] antisemitism that does nothing to counter cases of anti-Muslim persecution” and would become an institution, like the United Nations Human Rights Council, that attacks Israel.

Rep. Steve Chabot (R-OH) said that establishing the Islamophobia office would create a “dangerous false equivalence” between Islamophobia and antisemitism that “could be used by some extremists to actually justify further antisemitic activity.”

“To suggest that Islamophobia is on par with antisemitism is to dramatically understate and even trivialize the historic and pervasive nature that makes antisemitism such a difficult problem to overcome,” Chabot continued.

On the Democratic side of the aisle, more than half a dozen Jewish committee members voiced support for the bill, and pushed back on the notion that an Islamophobia envoy would undermine the antisemitism envoy.

“This is not about pick[ing] one. We should of course and will continue to condemn antisemitism,” Rep. David Cicilline (D-RI) said. “Absolutely no one is suggesting equivalence. We have a responsibility to protect everyone from discrimination based on religion, whatever that faith is.”

Rep. Ted Deutch (D-FL) added that the antisemitism and Islamophobia envoys could be effective partners to combat the two forms of bigotry sometimes spread by “the same people.”

Republicans introduced several amendments to the bill that sought to define Islamophobia and place specific limits on the office’s activities, including designating as specifically not Islamophobic fact-based criticisms of Islamist terrorist groups, fundamentalist Islamic regimes and practices such as female genital mutilation.

“We’re considering a bill here that is essentially identical to legislation that was embraced on a bipartisan basis to create an office to monitor and combat antisemitism at the State Department. Can any of us imagine this committee debating that legislation and having the kind of debate that we are having today?” Malinowski said. “When we had that debate, did people bring up stereotypical tropes about Jewish people and say, ‘Well, if you criticize somebody for disloyalty or for being greedy and it’s factual, then that’s not antisemitic… We didn’t have that kind of debate.”

Rep. Andy Levin (D-MI) told JI during a recess that he believes Republican opposition to the legislation is driven by “just personal attacks against Ilhan Omar.”

Rep. Brian Mast (R-FL) noted that Omar appeared to accuse several Jewish colleagues — including multiple committee members who supported the bill — of fueling Islamophobia for criticizing comments she made earlier this year which seemed to equate the U.S. and Israel with terrorist groups.

Omar accused Mast of engaging in “childish shenanigans” and declined to address the incident.

The committee debated an amendment from Rep. August Pfluger (R-TX) that would specifically block the office from promoting the Boycott, Divestment and Sanctions (BDS) movement.

“The purpose of my amendment is to define what those legislative guardrails are and what the office can and cannot do,” Pfluger said. Malinowski said that Congress has roundly condemned the BDS movement, and said it “has nothing to do with this legislation.”

At one point in the hearing, members engaged in a back-and-forth over support for Israel in the Biden administration and in Congress. Mast claimed that Secretary of State Tony Blinken’s statements in support of Israel were “other than genuine” and claimed Democratic support for Israel is waning.

Cicilline responded that it “saddens me to see you try to use Israel in a political way for a political advantage at the expense of the bipartisan nature of the support of Israel by the Congress of the United States.” Deutch also cited the recent 420-9 vote in favor of supplemental Iron Dome funding to argue that Democrats remain strong supporters of Israel.

The committee did not complete deliberations on the bill on Thursday, and will return Friday morning to vote on a series of amendments and on the bill as a whole.

If it passes the committee, House leadership announced it intends to bring the legislation to a full House vote next week, reportedly as a response to recently revealed comments by Rep. Lauren Boebert (R-CO) insinuating that Omar is a terrorist.