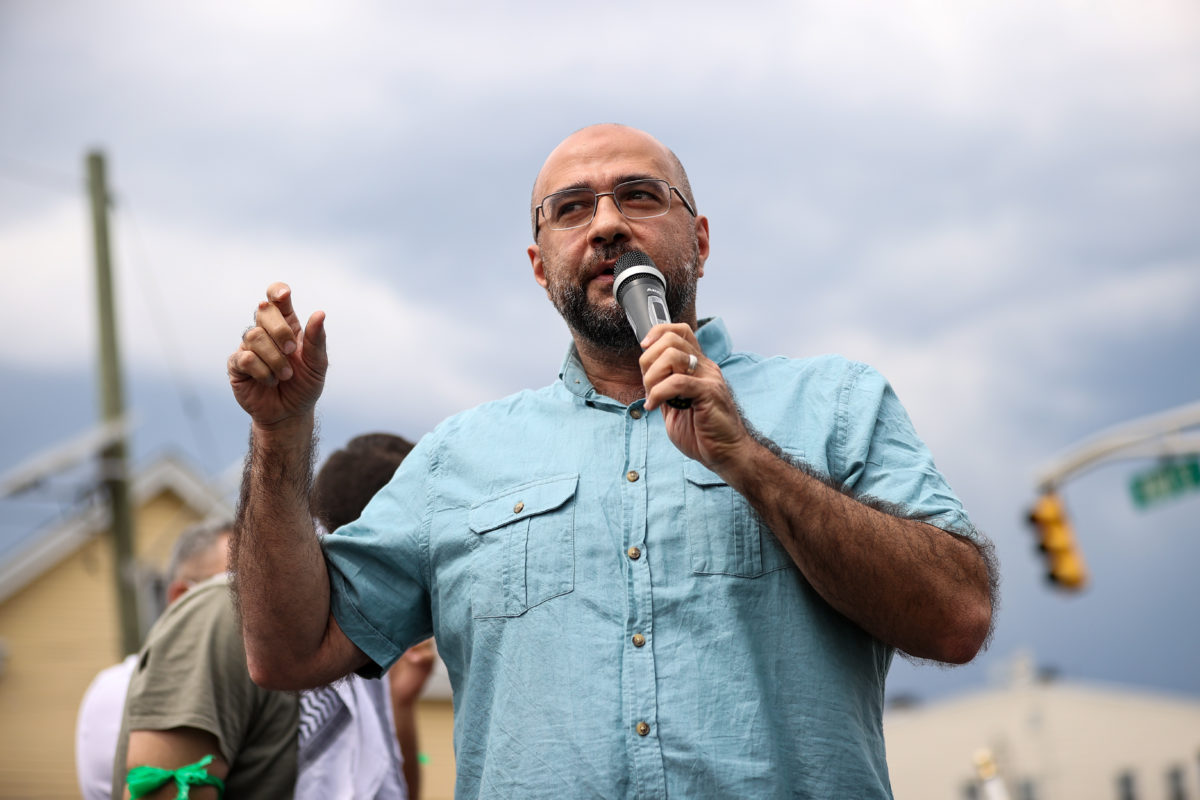 Jeffrey Togman wanted to make a documentary about the bloody civil war in Syria. He found his subject at a synagogue.

In May 2016, the Seton Hall University political science professor saw that Congregation Shomrei Emunah, a Montclair, N.J., Conservative synagogue five blocks from his home, would be hosting a discussion on the Syrian war and refugee crisis. At the time, Togman was actively looking for a subject to profile in his film. “I was looking for Syrian Americans who could tell the story of Syria,” Togman told Jewish Insider last week.

After hearing Mohamed Khairullah — a Syrian American activist and the mayor of nearby Prospect Park, N.J., a town of nearly 6,000 — speak at the event, Togman knew he had found his documentary’s main subject. “He’s a real American, Jersey guy. I thought he’d be a great character, and a great person to bridge these two worlds, to let many Americans understand what was happening in Syria,” Togman said.

After three years of filming Khairullah’s day-to-day life as mayor, including the Islamophobic hate mail that frequently lands in his inbox, Togman released “Mayor Mohamed” earlier this month at the Brooklyn Film Festival, with plans to bring the film to more audiences later this year. The goal of the film was twofold, Togman explained: to showcase the story of a long-serving Muslim elected official and the discrimination he faces, and to highlight Khairullah’s humanitarian work on behalf of Syrians trapped under Bashar al-Assad’s brutal rule.

“This basic notion that we’re all human beings, and that we have to stand by each other, is what people walk away with most strongly,” Togman said of the initial response he has received to the film.

Khairullah, a Democrat, has long been vocal about his Syrian heritage and his criticism of the Assad regime. He also is not shy about describing the racism he faces as a Muslim public servant. “There’s a lot more people who don’t speak about it, who just take their punches and roll through life, through the pain and suffering, sometimes missing opportunities — or sometimes just having to take the pain, that humiliation,” Khairullah told JI. “It’s just not acceptable, so I don’t mind exposing it. That’s why I chose to share my story.”

The feature-length movie shows life for Khairullah and his family in northern New Jersey. “The town itself is just a microcosm of American diversity,” Togman said of Prospect Park, where more than half the residents are of Hispanic origin. But, Khairullah said, “just like any New Jersey community, everybody complains about property taxes. We pride ourselves [ourselves] on our community and our quality of life.” He has been mayor since 2006 and plans to run for another term next year.

At the heart of the movie is Khairullah’s story of becoming an American. “There are all these barriers to integration for the Muslim American community,” said Togman. “It reminds me very strongly of the Jewish American experience. In fact, one of the characters in the film equates the two. And it’s really a story of this community that is often looked at in a suspect way, that’s often excluded.”

Khairullah left Syria in 1980 as a child. He was not officially a refugee, but his father was known to be a critic of Hafez al-Assad, the current leader’s father. The Khairullah family first went to Saudi Arabia, where they lived for 11 years, before coming to the U.S. when Khairullah was a teenager.

Compared to the conservative Saudi Arabia, America was a culture shock. “I had to get adjusted to the freedoms that we had,” said Khairullah. “I could never become a firefighter in Saudi Arabia — and that was a passion for me — because I’m not Saudi. But here, they told me, ‘Look, you couldn’t be a firefighter, but we could change the local ordinance.’” He was not used to seeing rules changed without the permission of a king.

In most ways, Khairullah’s life is unremarkable: He spends time with his wife and kids, he goes to work as a teacher (his day job), he roots for the Giants. But he also deals with the discrimination that comes with being Muslim in America.

“I wasn’t fully aware, certainly, at the type of hatred that Muslim Americans face,” said Togman. “The hate mail was atrocious: wishing them all dead, saying that all Muslims were animals. Things that many other groups, including Jewish Americans, are very familiar with.”

One sequence in the film shows different scenes of Khairullah with his wife and children — eating dinner, hanging out on the couch — while the text of hate mail he has received is overlaid on the screen. His wife holds their baby, smiling and laughing with their older children, as Khairullah looks down at his phone. The message, “I cannot wait till Trump takes this nation over and sticks his foot up your Syrian scumbag a**” appears on the screen.

Khairullah said he received anti-Muslim hate mail before former President Donald Trump was elected in 2016. But after Trump issued an executive order banning travel from seven predominantly Muslim nations a week into his presidency, Khairullah said the hate ratcheted up. “To my knowledge, it has become more common and people have become more daring. Those who had some kind of racist vein in them, they just expose themselves.”

The hostility increased following his response to Trump’s policy. “We issued our executive order saying that everybody is welcome into town, and our municipal employees cannot ask for legal status while providing services. This is when we started receiving extra hateful messages,” Khairullah recalled.

The documentary also features the story of a Republican challenger who drew accusations of Islamophobia. Khairullah had been speaking at a Board of Education meeting, and the woman spoke over him, saying, “This is not Sharia law, this is an orderly session.”

“She refuses to apologize, and then she runs against him,” said Togman.

The Syrian civil war that prompted Togman to make this documentary still rages on. “History is not going to look kindly upon us,” said Khairullah, arguing that neither former Presidents Barack Obama nor Trump took strong action on behalf of Syrians. “I hope that the Biden administration shows a little more leadership here and works more toward helping the Syrian people towards aspirations, towards freedom and self-determination. But I’m not very hopeful at this point.”

One scene in the movie shows a clip of Khairullah during a visit to Syria, one of several he took to the country as a relief worker. He stands in Aleppo amid the ruins of a bombing, ambulances speeding by all around him. ”Syrians are not radical. They’re not terrorists. All they want is their freedom, their democracy,” Khairullah says in speech at a protest back in New Jersey.

Togman and Khairullah traveled together to Turkey in the course of making the film, where they visited Khairullah’s extended family and attempted to enter Syria together. They were barred, and Khairullah has not gone back since 2015.

Now, after a decade of trying to get Americans to pay attention to the brutal actions of the Assad regime, Khairullah has changed his tactics and lowered his expectations. “It’s more focused. You go and speak now to people who want to listen, rather than try to project it to the entire world,” said Khairullah. The same principle holds for the movie: “If someone goes to watch the movie, they know they’re going to watch something about Syria.”

But they will also learn something about their Muslim friends and neighbors here in the U.S. “It’s been something of an eye-opener. People have been shocked about the experience of the Muslim American community,” said Togman. Muslims who have watched the movie have taken something special from it: “I think that they really enjoy seeing a Muslim American as a hero in a film.”