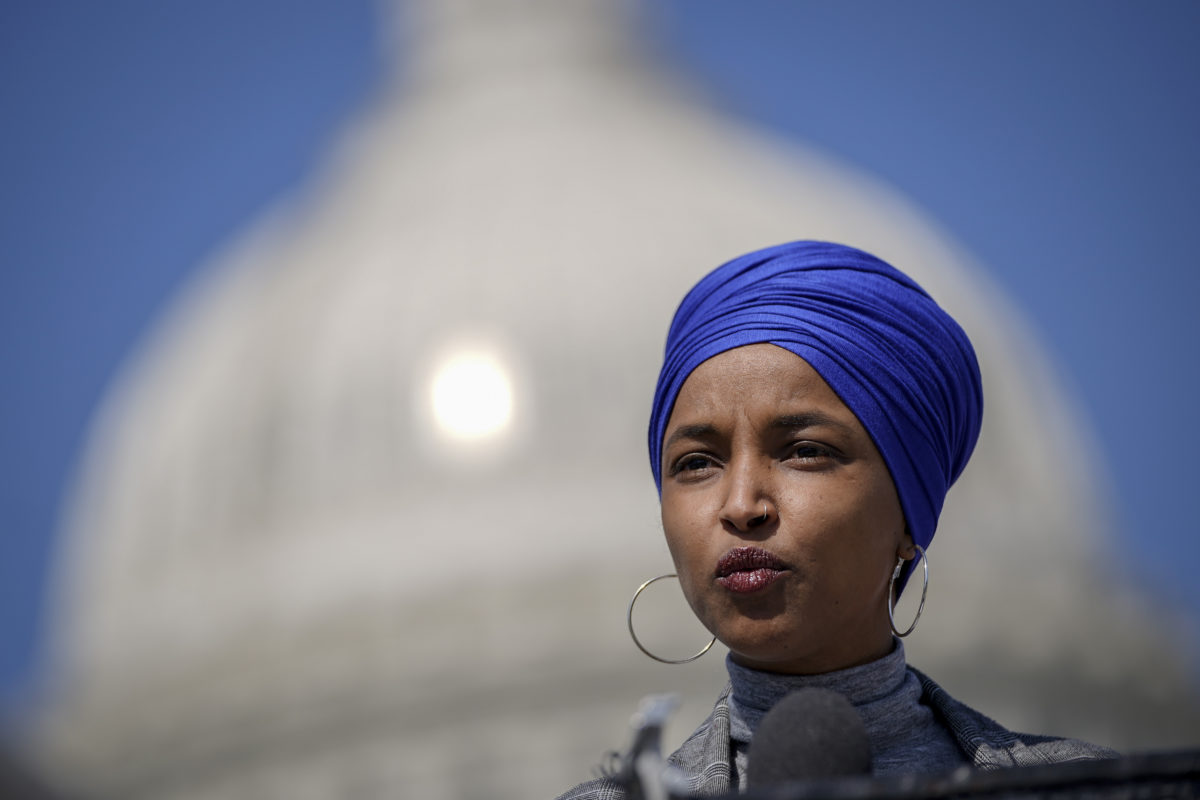 Rep. Ilhan Omar (D-MN) walked back comments that appeared to equate actions by the U.S. and Israel to terrorist activities by the Taliban and Hamas amid rising tensions among House Democrats on Thursday.

The Minnesota congresswoman issued a statement Thursday afternoon that appeared to walk back portions of her previous remarks, saying that she was “in no way equating terrorist organizations with democratic countries with well-established judicial systems” and that she was seeking “accountability for specific incidents regarding those [International Criminal Court] cases, not a moral comparison between Hamas and the Taliban and the U.S. and Israel.”

This statement appears at odds with her initial comments, in which she expressed doubt that the Israeli and American judicial systems were willing or able to address the alleged war crimes the ICC is investigating.

“Drawing false equivalences between democracies like the U.S. and Israel and groups that engage in terrorism like Hamas and the Taliban foments prejudice and undermines progress toward a furture of peace and security for all,” the statement reads.

Rep. Brad Schneider (D-IL), who led a group of 12 Jewish House Democrats to condemn Omar on Wednesday, told Jewish Insider, “I am pleased Rep. Ilhan Omar heard our concerns about her tweet, issued a clarification and agrees with our point. I hope all can avoid such offhanded statements in the future as we work together to support American jobs [and] families,” adding, “Democracies should never be lumped in with terrorists.”

Rep. Lois Frankel (D-FL), who also signed onto the Democrats’ statement, told JI, “I am pleased that Rep. Omar has clarified her remarks. I look forward to talking to her in person next week when we are back in D.C.”

Omar’s statement struck a distinctly different tone than her tweets earlier Thursday, in which she said that it was “shameful” for her colleagues to put out a public statement on the issue without contacting her privately first. She accused the 12 Jewish Democrats of spreading “islamophobic tropes” and of attempting to undermine International Criminal Court investigations of alleged war crimes.

“The constant harassment [and] silencing from the signers of this letter is unbearable,” Omar said. “Citing an open case against Israel, US, Hamas [and] Taliban in the ICC isn’t comparison or from ‘deeply seated prejudice.’”

Efforts to ease tensions appeared only partly successful, as some Omar-aligned Democrats appeared to harbor continuing frustration about the situation following her backtrack.

Omar herself retweeted a statement from Rep. Betty McCollum (D-MN) that said, “Omar asked a serious question which is her right as a member of Congress” and accused Republican leaders of hypocrisy around half an hour after issuing her clarification statement.

Rep. Rashida Tlaib (D-MI) slammed Democratic leadership, tweeting that “freedom of speech” and “benefit of the doubt [don’t] exist for Muslim women in Congress” and leadership “should be ashamed of its relentless, exclusive tone policing of Congresswomen of color.”

“We cannot ignore a right-wing media echo chamber that has deliberately and routinely attacked a Black, Muslim woman in Congress, distoring her views and intentions, and resulting in threats against Rep. Omar and her staff,” Jayapal said. “We urge our colleagues not to abet or amplify such divisive bad faith tactics. Members of the Democratic Caucus owe it to each other to pause, reflect and engage directly with each other when misunderstandings arise, and stand together against cynical attempts to divide our caucus.”

Republicans may also seek to weaponize the situation. GOP leadership is reportedly considering forcing a floor vote relating to Omar’s comments — possibly on a measure to censure Omar or remove her from her committee seats.

Tensions had boiled up earlier Thursday as several left-wing House members — Reps Cori Bush (D-MO), as well as Tlaib and Ocasio-Cortez  — rallied behind Omar and criticized the group that had spoken out against her.

Tlaib tweeted that their colleagues’ “obsession with policing [Omar] is sick.” Bush said that it is “especially hurtful” when Democrats “attack Black women for standing up for human rights” and accused members of the Democratic caucus of “anti-Blackness and Islamophobia.”

Ocasio-Cortez tweeted that she was “Pretty sick [and] tired of the constant vilification, intentional mischaracterization, and public targeting of [Omar] coming from our caucus. They have no concept [of] the danger they put her in by skipping private conversations & leaping to fueling targeted news cycles around her.”

Opposing Omar, Rep. Tom Suozzi (D-NY), who represents parts of the North Shore of Long Island and Queens, became the first non-Jewish Democrat to condemn Omar’s comments, slamming her for “equat[ing] our ally and democracy, Israel with the universally recognized terrorist organization Hamas.”

“She is wrong and must be called out. This is the latest in a series of wrongheaded and inflammatory statements she has made against Israel and the Jewish people which I strongly disagree with,” he continued. “She does not represent my values.”

Suozzi also compared the situation to Rep. Marjorie Taylor Greene’s (R-GA) comments comparing COVID-19 safety measures to the Holocaust, which were condemned as antisemitic by members of both parties.

Earlier on Thursday an unnamed source close to Omar told Politico that Omar “had tried to contact several of the Democrats involved in drafting the statement before its release but was unable to reach them.”

A spokesperson for Schneider told JI that Omar had not contacted him directly. A spokesperson for Rep. Brad Sherman (D-CA), who signed onto the joint statement and issued one of his own, also said he had not heard from Omar. Rep. Josh Gottheimer (D-NJ), another signatory, was also not contacted, a source familiar with the situation told JI.

Some groups, including AIPAC, the American Jewish Committee, Jewish Federations of North America and Democratic Majority for Israel applauded Democratic leadership and the 12 signatories on the statement released Wednesday night. The Jewish Democratic Council of America said it will be meeting with Omar next week and plans to discuss this incident with her.