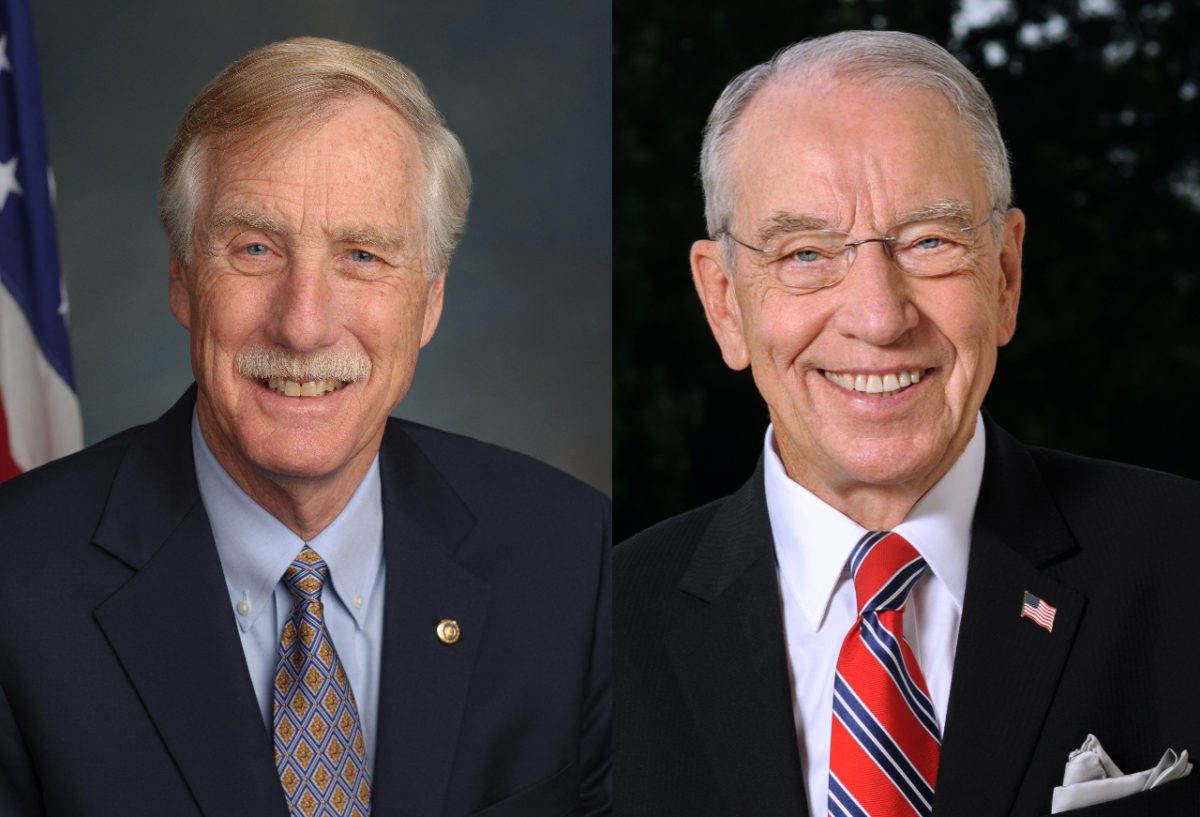 A Senate bill introduced Tuesday that would create new rules to govern philanthropic contributions made through donor-advised funds (DAF) has Jewish nonprofit leaders warning of a “fundamental change” in giving that would “deprive those most in need.”

The Accelerating Charitable Efforts (ACE) Act, sponsored by Sens. Angus King (I-ME) and Chuck Grassley (R-IA), would require donations made via donor-advised funds to be distributed to charities within 15 years from when an individual places money in the fund. Existing laws allow individuals to earn tax advantages when they donate to a DAF, but there is no timeline for when the money must be distributed to nonprofit organizations.

Critics of the current rules say that the lack of timeline for distributing donations keeps money from actually reaching charities and helping people in need, which allows donors to get a tax deduction without actually supporting nonprofits. Backers of current policies say that DAFs provide freedom and flexibility to donors — including an alternative to the more onerous process of creating a foundation — who want a place to put their money while they consider where to donate it.

DAFs have become a popular mode of giving for Jewish donors in recent years, with many funders using independent community foundations, such as the Jewish Communal Fund in New York. In other cities, like Atlanta and Baltimore, Jewish federations have allowed donors to create DAFs under the auspices of the federation. Community leaders told Jewish Insider that changing the regulations around DAFs could have a detrimental effect on Jewish philanthropy.

“We are gravely concerned that efforts to undermine DAFs, the fastest growing vehicle for charitable giving in the U.S., would fundamentally change the nature of philanthropy and deprive those most in need,” Eric Fingerhut, CEO of the Jewish Federations of North America, told Jewish Insider. “DAFs play an especially important role during times of crisis in their ability to immediately funnel life-saving funds.” JFNA was one of more than 80 organizations to sign on to a letter urging congressional leadership to oppose the new legislation and include charitable organizations in future conversations about reform.

An analysis from Nonprofit Quarterly showed that DAFs gave away about 31% more money in 2020 than in 2019, likely in response to the COVID-19 pandemic. Beth Sirull, president and CEO of the Jewish Community Foundation of San Diego, told Jewish Insider that the flexibility of DAFs — the fact that people can make a donation without immediately directing it to a charity — is what allowed her organization and the San Diego Jewish community to respond so quickly to hunger and financial insecurity as layoffs skyrocketed in the early days of the pandemic last spring.

“We were really fortunate that people had put money away in their donor-advised fund at the start of that pandemic, because we put the call out for the emergency, and the money came pouring in,” Sirull explained. “If people had not, if we were relying on people’s annual philanthropy to fund an emergency, we would have [had] a problem.”

The proposed legislation would change the tax code so that donors could only get the full income tax deduction if their funds are distributed within 15 years after being placed in a DAF. Another type of fund, for donors who wanted a longer time frame, would allow the funds to remain in the DAF for up to 50 years — but the donor would not earn the income tax deduction until the funds are distributed.

“Nobody has an interest [in] parking the money there forever, because you can’t go and buy stuff,” said Andres Spokoiny, president and CEO of the Jewish Funders Network, an organization that connects donors who give at least $25,000 annually in the name of Jewish values. “The reason why people park it is because either they’re saving it for children, because they’re waiting for something, because they don’t have clarity on what to do, because whatever.”

So far, no senators other than King and Grassley have signed onto the legislation, and it remains too soon to tell whether the bill will make it to a committee markup, let alone a vote. Spokespersons for Sens. Sherrod Brown (D-OH) and Brian Schatz (D-HI) — the co-sponsors of a bill introduced earlier this year to support nonprofits — did not respond when asked if they would support the legislation. A spokesperson for Sen. Amy Klobuchar (D-MN), who is a lead sponsor of the WORK NOW Act that aimed to assist nonprofits, declined to comment. Senators may be waiting to see how activists or lobbyists feel about the legislation: A spokesperson for Sen. Ron Wyden (D-OR), the fourth co-sponsor of the WORK NOW Act, told JI that the senator “is familiar with the proposal and would encourage stakeholders to weigh on these new ideas,” but would not say whether he had plans to take a side.

In a press release announcing the legislation, King and Grassley explained that the goal is to “clear up [the] gray areas, and ensure that charitable contributions will swiftly reach the worthy organizations doing good in communities throughout the country and all over the world.”

A New York Times story about the bill provided the example of Jeff Bezos. The article noted that Bezos was ranked as the top philanthropist of 2020 by the Chronicle of Philanthropy because he pledged $10 billion to fight climate change — yet as of this week, he had only donated $791 million, less than a tenth of what he pledged. It is not yet clear if he donated the $10 billion to his Bezos Earth Fund —  or how the Bezos Earth Fund will be structured — and if he has earned the tax benefit associated with nonprofit donations. According to Vox, Bezos pledged earlier this year to distribute about $1 billion annually for 10 years, but he has not provided additional information.

But Bezos is the wealthiest person in the world, and creating a tax code based on his actions is misguided, Sirull said. “To base legislation off of the behavior of Bill Gates and Jeff Bezos and Elon Musk and people like that makes no sense, because there’s like 10 of those people, whereas there are many, many, many who are wealthy philanthropists, but they’re not wealthy on that level,” she explained.

The bill, however, does have some backers in the philanthropic world. Early supporters include the organizations Global Citizen, Give Blck and Rehabilitation Through the Arts. And the philosophy behind the bill — the framework of accelerating charitable giving from DAFs — has been endorsed by several prominent philanthropists, including Seth Klarman and John Arnold, as well as the heads of the Ford, Kellogg and Kresge Foundations.

“I think that this is a positive sign that the government is taking common-sense approaches towards improving the donor-advised fund industry,” said Robbie Heeger, president and CEO of Endaoment, a DAF that accepts donations in the form of cryptocurrency. “In that respect, it shows an appreciation for the value of a donor-advised fund while still acknowledging that it has flaws and that we should try to do something to align the common behavior around DAFs with the original intended purpose, which is to give a donor freedom to choose over time where to give to, but not to never give it away.”

Heeger argues that part of the opposition to these rules comes from foundations and management companies that earn fees on funds each year they sit in DAFs. If the money sits in a DAF for a long time, it ends up having less of an impact, because a sizable chunk will go to investment fees or to the sponsoring organization.

“The longer I sit on [a DAF], the less impact it actually makes, and the marketing narrative that these community foundations are pushing is the exact opposite, that you’re growing your impact,” Heeger argued. But he stopped short of endorsing the legislation entirely, suggesting that a legislative solution might not be best. “I think we can do better. Whether that should come from the government, what the expectation is, I think is probably not the case.”

Even among more established DAFs, funders are not all on the same page. “In my network, you actually have people that are supportive of the legislation and people that are against it,” Spokoiny noted.

Spokoiny is skeptical of the legislation. “I personally stand in between these two positions,” he explained. By offering “complete philanthropic liberties, there’s going to be a lot of abuses. But regulating too much can have a chilling effect on philanthropy.” He warns that even if the legislation is well-intentioned, “you have to be really careful of unintended consequences.”

The new regulations could also push away people who are drawn to DAFs for their relative lack of rules, Spokoiny argued. “When people really have an unexpected windfall of money, a cost event of some sort, and they want to give more strategically and more judiciously and they don’t have the time to do a creative philanthropic strategy overnight, they decide, ‘We’ll put it in a donor-advised fund, and we’ll think what we do,’” he said. But if, Spokoiny posited, that person wanted to keep the money in a DAF for their children to access decades down the line, the new legislation would keep him from doing that. In this situation, that person might say, as Spokoiny put it: “‘You know what, now I might not give it away, I may just say screw it, and buy another yacht.’”

The legislation appears to be at least in part directed at DAFs managed by private companies like Fidelity, Schwab and Vanguard — and not community foundations — with Grassley, the Iowa senator, criticizing the fees made by the people who manage these funds. “Charitable dollars ought to be doing the good they were intended for, not sitting stagnant to provide tax advantages for some and management fees for others,” he said in a press release.

The bill would provide exemptions for donors whose DAF accounts hold up to $1 million at community foundations.

Sirull worries that new regulations could spook major donors who don’t want to deal with the restrictions. “Approximately 80% of the grants that leave the Jewish Community Foundation in San Diego come from 20% of our donors, which is very standard,” Sirull noted. “We don’t want to do anything that’s going to discourage philanthropy among those 20%.”

“This is a solution in search of a problem,” Sirull said. She and Spokoiny say evidence does not back up the claim made by the bill’s supporters that a significant amount of donors just put their money in DAFs and leave it there forever. Research from Philanthropy News Digest shows that the average annual payout from DAFs is actually about 22%, which is well above the 5% annual payout required for private foundations. Sirull says the average payout ratio at her foundation in the past five years is over 30%, and it has never gone below 20%.