The bill stalled in the previous congressional session, but backers are hoping for better progress this term 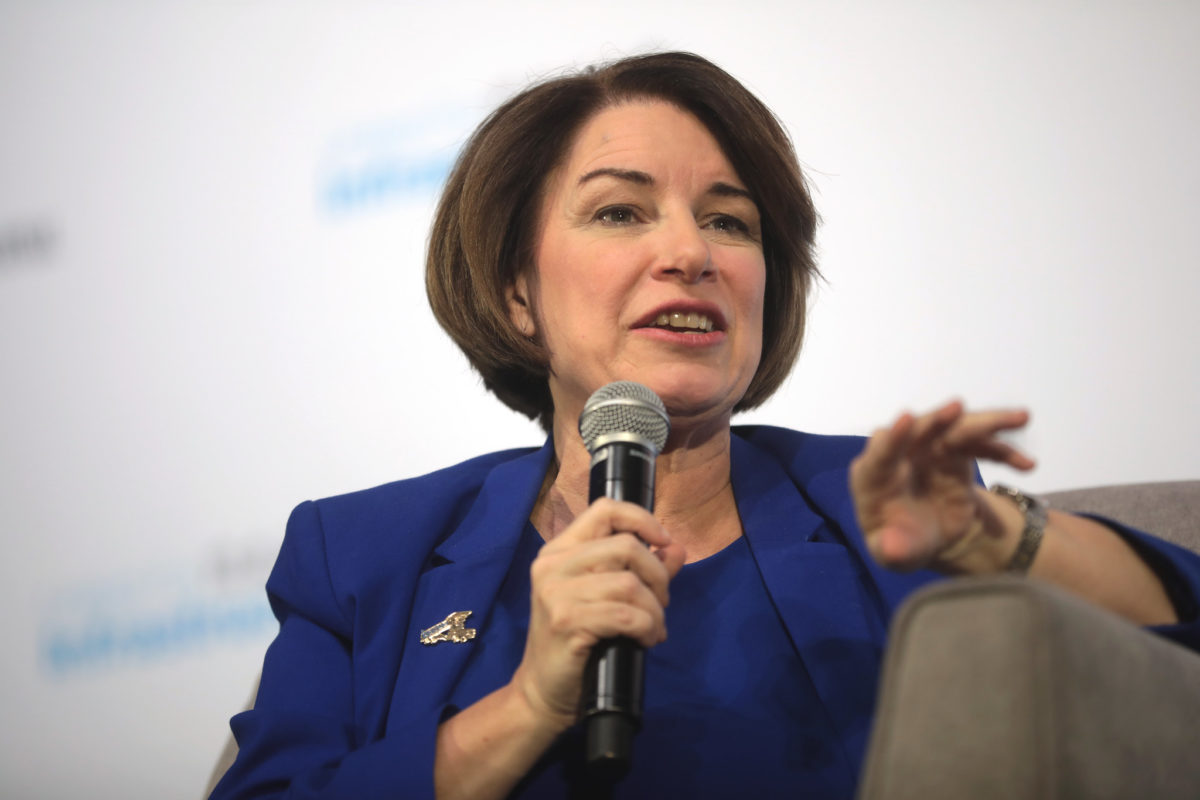 Sen. Amy Klobuchar (D-MN) speaking with attendees at the Moving America Forward Forum hosted by United for Infrastructure at the Student Union at the University of Nevada, Las Vegas in Las Vegas, Nevada.

The legislation, known as the WORK NOW Act, was introduced by Sen. Amy Klobuchar (D-MN) in May 2020. Klobuchar’s efforts are supported by 12 other Senate Democrats, including Sens. Brian Schatz (D-HI), Ron Wyden (D-OR) and Sherrod Brown (D-OH). Rep. Linda Sanchez (D-CA) is expected to introduce the bill’s counterpart in the House, Klobuchar said. More than 100 nonprofit organizations, including the Jewish Federations of North America, the Orthodox Union and Agudath Israel of America endorsed the legislation.

According to a letter to congressional leaders from Klobuchar and some of the legislation’s cosponsors, the bill aims to “help nonprofits expand, rather than shrink, the ways in which they are serving their communities.”

The $50 billion grant program the bill aims to create would be administered by the Treasury Department, which would provide block grants to state and local governments. Local governments would in turn provide funding to nonprofits at their discretion. The distribution model is based on a modified version of the Department of Housing and Urban Development’s Community Development Block Grant program. The Treasury would also distribute $2.5 billion to nonprofit intermediary organizations to fund grants for themselves and their affiliates.

Grant funding would go primarily to covering salaries up to $50,000 per employee, as well as other employee benefits, personal protective equipment and some operating and program costs. Grants to individual nonprofits would be capped at $3 million.

“The WORK NOW Act is an important step [toward] our COVID recovery. It recognizes that many nonprofits have seen an increase in demand for services and helps newly unemployed Americans get back to work,” JFNA Associate Vice President for Public Policy Stephan Kline told Jewish Insider. “Jewish communal institutions will benefit from this legislation if enacted because they will receive funding to address increased demand and many of the clients we serve could receive jobs through it. We appreciate Senator Klobachar’s leadership on [these] issues.”

Rabbi Abba Cohen, Agudath Israel’s vice president for government affairs, praised the bill as a “creative, yet straightforward” way to address the twin issues of funding challenges for nonprofits and unemployment.

“At this particularly difficult time, when the drying up of their own private sources of income are leaving them bereft of resources, nonprofits are still being asked to step up and help address America’s most pressing needs. At the same time, the nation is confronted with the plight of millions of unemployed Americans and their families,” Cohen said. “This legislation fuses these needs together, providing relief to both nonprofits and the unemployed, and ultimately helping them, in turn, help our nation.”

The bill failed to gain traction when it was first introduced last year, in part due to a lack of Republican support, according to Orthodox Union Advocacy Center executive director Nathan Diament.

Diament believes “there’s a reasonable prospect” of gaining bipartisan support for the legislation this term. He added that advocates hope the bill will be folded into an upcoming infrastructure spending package, which is likely to be the next major spending bill to come through Congress.

That bill, Diament explained, is more likely to be bipartisan than the American Rescue Plan COVID-19 relief bill, which Democrats passed in a near-party line vote — although Senate Budget Committee Chairman Bernie Sanders (I-VT) is preparing for a partisan fast-track process on the infrastructure package.

“Even Republicans love pork barrel projects,” Diament said. “So we’re just trying to have a little kosher pork in the package.”

Read the text of the letter below:

We write to express our concern about the impact of the coronavirus pandemic on the charitable nonprofit community and to respectfully request that you include provisions to provide broad relief for nonprofits in subsequent coronavirus relief legislation.

Almost a year ago, Congress came together on a bipartisan basis and passed the CARES Act in response to the rapidly worsening coronavirus pandemic. It quickly became clear that the depths of this pandemic would be felt across our entire economy, including the nonprofit sector. In fact, a recent report by the Johns Hopkins Center for Civil Society Studies estimates nearly 960,000 nonprofit jobs were lost due to the coronavirus pandemic over the past ten months.

While nonprofits are on the front lines of this crisis, demand for their services has never been higher. Nonprofit caseloads have exploded during the coronavirus pandemic, with reports highlighting long lines at food banks, overloaded calls for housing assistance, and overwhelmed mental health providers. Unfortunately, charitable giving to smaller nonprofits (which account for 92 percent of nonprofit organizations) declined by over 7 percent last year. With decreased charitable giving and extraordinarily high community needs, nonprofits are being squeezed from all sides.

We introduced the WORK NOW Act in May of last year to help nonprofits expand, rather than shrink, the ways in which they are serving their communities. This bill – which was reintroduced in the Senate and the House of Representatives this week – creates a grant program at the Treasury Department to help nonprofit organizations retain employees, scale up operations to meet increased demand, and employ newly unemployed workers. Allocations will be made to states and localities – with all funding channeled directly to eligible nonprofits – and the majority of funds must be used for paying the wages, salaries and benefits of either existing employees or new employees.

Since we initially introduced this bill last year, over 500,000 Americans have lost their lives due to the coronavirus and we are still down nearly 10 million jobs. More than ever, nonprofits and the communities they serve need our support and we encourage you to include provisions – such as the WORK NOW Act – in subsequent coronavirus relief legislation. Thank you for your time and attention to this important matter.