Meet the CoronaCrush couples who got engaged in quarantine

The Facebook group has already resulted in at least seven engagements since its creation last spring.

Last year, at the beginning of the pandemic, a small group of friends in New York and Israel were hanging out on Zoom, discussing the daunting prospect of dating in lockdown.

The product of their conversation was CoronaCrush, a private Facebook group for Jewish singles looking to couple up in quarantine. It took off. Within a week or so, CoronaCrush had attracted some 2,600 members from around the globe, a digital repository of hopeful personal ads posted in an uncertain time. A month later, users saw the addition of a virtual speed-dating service and then a matchmaking component, seeded with funding from American donors.

Now a registered nonprofit, CoronaCrush boasts around 20,000 members, with a matchmaking database of nearly 8,000 users who are “looking to get married,” according to Ian Mark, a CoronaCrush co-founder who lives in Jerusalem. “We set it up because it was meant to be serious dating,” Mark told Jewish Insider in a recent interview.

Maybe there would even be some engagements, the founders thought. “We thought three would be cool just because it’s a classic number,” said Ben Lang, another co-founder. “If you help three people get engaged you go to heaven, that whole thing.” 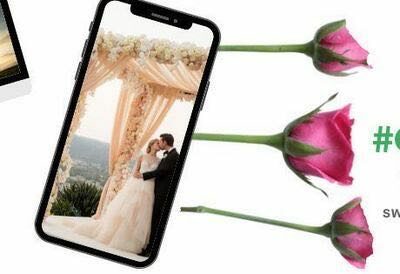 The current tally, however, has far exceeded his expectations. There are currently seven couples who first met on CoronaCrush and have since gotten engaged, according to Lang, who suspects the number may be even higher because some couples likely haven’t made their engagements public. “Seven is a lot more than we thought,” Lang said.

“There have been sooooo many engagements!” Bracha Katsof, who helped create the group, added delightedly in a WhatsApp exchange from Tel Aviv. “It’s crazy to me that a year ago these people weren’t connected at all,” she said, “and they were willing to take a risk to put themselves out there online in order to meet someone. And it worked!”

JI spoke with three engaged couples about how they came to find love in an age of isolation. Here are their stories.

Daniella Cohen, a 27-year-old grant writer at the Jewish Agency for Israel, wasn’t getting her hopes up about finding a partner when she began scrolling through CoronaCrush while confined to her Jerusalem apartment last year. But it was an amusing diversion nonetheless. “It was very humorous to read the posts,” she said recently. “It was something to entertain us.”

Until it was more than that. She happened upon a post from Betzalel Silver, a 34-year-old software developer living about an hour’s drive away in Givat Shmuel. “This group was really interesting,” said Silver, who grew up in Israel but whose parents made aliyah from New York. He felt like he could find, as he joked, “a good Anglo girl,” referring to a native English speaker in Israel.

Cohen, who made aliyah nine years ago from South Africa, was attracted to Silver’s humor, “liked” his post and sent him a private message, which went directly to his spam folder. Silver, however, saw the “like,” and fired off a note of his own. “I didn’t realize that she’d messaged me first,” he recalled.

No matter. After messaging on Facebook, they talked on the phone and soon agreed to meet in a Jerusalem park in late May. The scene, in retrospect, was almost too auspicious. “There were like three other proposals happening there and a renewing of vows under this chuppa,” Cohen told JI. “It was very special.”

The couple had good chemistry and made each other laugh. It also helped that they had similar religious and cultural backgrounds. Though Silver was born in Israel, “he’s very much Anglo because of his family,” said Cohen. “It was really nice for me in that we have a common language.”

The hard part was maintaining the relationship as they navigated a series of lockdowns, but they made it work. “We had to keep seeing each other,” Silver said, “and we took a lot of risks just driving back and forth.”

“It was really a great time to have this relationship in our lives,” said Silver, who was unemployed for the first three months of the pandemic but found a reason to stay positive when he met Cohen. “We were so bummed out being in our apartments all day and all week.”

“We had to spend a lot of time indoors,” Cohen said. “We got to know each other more through that.”

They got engaged in February. “I wanted to keep it as much a secret as I could,” said Silver, who proposed at a wine-tasting and then ushered his new fiancée to a surprise engagement party at which some family members were waiting. “It was really beautiful,” Cohen said. “He wrote me a song.”

“I’m going to sing it also at the wedding in two months,” said Silver.

Sivan Bokobza, a 26-year-old phlebotomist in Cedarhurst, N.Y., likewise had relatively low expectations when she joined CoronaCrush. As an intermittent Facebook user, she had forgotten all about the group until a friend who was also on CoronaCrush drew her back in a couple of months into the pandemic. “She’s like, ‘Oh my God, this guy is so your type. Can I message him for you?’” Bokobza told JI. “I was like, ‘Uh, sure, I guess.’”

Lior Ohayon, 28 and living in Toronto as an e-commerce professional, was the guy. “I just texted her and then ended up talking for around two months,” he said. They bonded over their shared Sephardic heritage and had the same religious values. It also didn’t hurt that they were both unintimidated by the pandemic, and Ohayon flew to New York last July so they could meet for the first time.

Whether they would connect as well in person as they did on the phone was a separate, though ultimately unfounded, concern. “I was definitely nervous about that,” said Bokobza. “At the beginning, I was definitely way more shy than I am now. But there really wasn’t a dramatic difference. It wasn’t like, ‘Whoa, this is not what it’s like on the phone.’ We were both pretty much ourselves the whole time.”

“We connected instantly,” said Ohayon, who spent three days in New York. “The first time we met I pretty much just asked her to be my girlfriend.”

In doing so, Ohayon said, he was breaking a long-held pledge that he would never date someone from New York. “I don’t like the city,” he said. “It’s funny how it turned that around.”

Things progressed quickly from there. Ohayon went back to New York every few weeks or so from Toronto, or they would meet in Los Angeles and Miami, observing Shabbat at local Chabad houses. In November, Bokobza, who had been restricted from traveling to Canada because of the pandemic, earned an exemption and flew to Toronto to meet Ohayon’s family.

“When I met his friends and family it became more serious and real, and I got to see more of him and understand him more,” Bokobza said, adding that it was a “pivotal moment” in their relationship when he met her family as well.

In January, Ohayon relocated to Tulum, Mexico, where he set up a temporary office and planned to propose, having secreted a ring from New York without Bokobza’s notice. “I was throwing her off,” he said.

In March, Bokobza flew to Tulum, where, after dinner one Sunday night, Ohayon ushered her up to a romantic lookout beside a pool, at the bottom of which were arrayed a series of stones asking her to marry him. Ohayon, who had hidden the ring in a tote bag stuffed with jeans, had arranged for a covert photographer to capture the moment. Their friends came later for a party.

“I did not expect to get engaged during this,” Ohayon told JI, adding that they are planning to get married in August, likely in New York, and considering moving to Miami.

Drew Feldman, 30, and Danielle Lavey, 28, had been talking via Zoom for about a month after connecting on CoronaCrush when they decided to meet in person. Feldman, a filmmaker who was living in Dallas at the time, flew to Lavey’s home in Knoxville, Tenn., got a COVID test and decided that he had made the right decision risking his health to meet the woman he now knew he would marry. After a few trips back and forth, he stayed put. “I moved here to date Danielle more seriously and then stuck around,” Feldman said.

“It was pretty clear that this was something very serious from very early on,” said Lavey, who works as a healthcare consultant and believes that the pandemic brought them closer together. “It just made time for us to really get to know each other.”

“I was moving a lot and traveling a lot for a variety of projects, which personally made it challenging to date, and the pandemic actually forced me to slow down and kind of stay put for a little bit,” Feldman added. “It’s been amazing. I’ve worked in one place for longer, in this pandemic, than I have in the last probably decade of my life, in terms of moving around. So I think it created a space and ability to have the time and opening to get to know Danielle more deeply.”

Soon enough, they were discussing getting engaged, but Feldman surprised her with a backyard movie screening at which he aired a short film, now available on Facebook, about their relationship, and asked Lavey to marry him. “We had a mazel tov over Zoom afterwards,” she said.

The wedding, which they described as a COVID-safe ceremony in the Smoky Mountains, is scheduled for May 6. It has been difficult to coordinate, not least because Knoxville has few kosher food options. They were forced to find catering in Atlanta.

“All the time we had to date, and the fun and the romance of our time before, has quickly been hidden by all the wedding planning,” Feldman said. “Lately, it’s just been work, work, work. I think we’re both very excited to have the wedding and move past the wedding planning and get back to just getting to spend time with each other.”

Not that the wedding won’t be special. “We’re having an Orthodox wedding with a bluegrass band that’s from Dolly Parton’s hometown,” said Lavey. “We’re probably going to be the first to do that.”