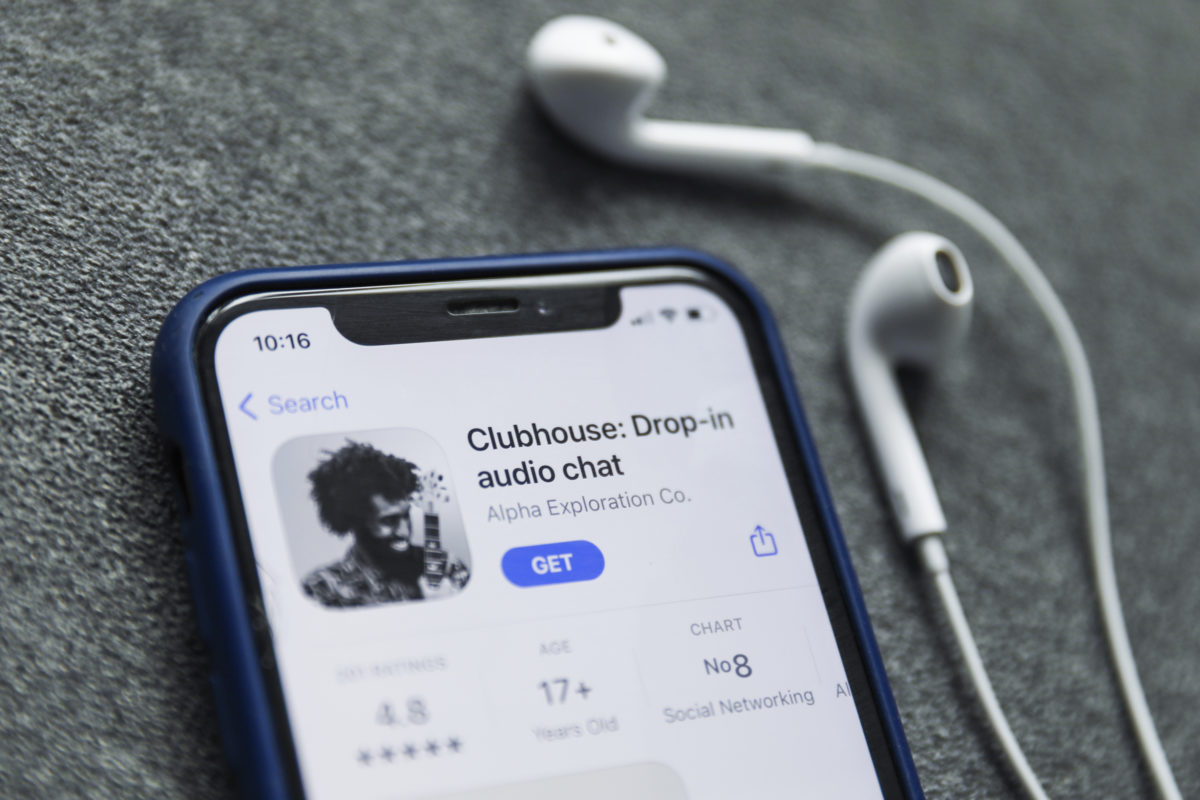 The Clubhouse chat app logo on the App Store is seen displayed on a phone screen in this illustration photo from February 3, 2021.

Clubhouse, a new audio-only social networking app, is quickly becoming the digital version of the Jewish conference circuit hallway. With in-person meetups on hold due to the novel coronavirus and Zoom broadcasts often taking on a formal nature, Jewish conference regulars had been searching for a digital duplicate of the informal conversations that are often the main draw of the offline gatherings. Members of the community who are always up to schmooze appear to have found a new forum for those conversations.

William Daroff, who joined the app in February, likened his Clubhouse experiences to life before the pandemic, when the affable CEO of the Conference of Presidents of Major American Jewish Organizations routinely turned out to large, well-attended conferences including AIPAC’s annual policy conference, the Jewish Federations of North America’s General Assembly and the Union for Reform Judaism Biennial, among others.

There, he would catch up with colleagues he had not seen for months, whether at the hotel bar, over breakfast, or in the back of the room “when we are not paying attention to whoever is speaking and talking amongst ourselves,” he joked during a recent interview over Zoom from his home in Washington D.C.

“To some extent it is like walking through the hallways of a Jewish conference because you’ll run into somebody and [think] ‘It’s been a long time since I connected with that person,’ and you can jump into a private room with them, or you can be in a public room with them and talk about issues that are engaging,” he said.

Rachel Sumekh, the founder and CEO of Swipe Out Hunger and a frequent speaker on the Jewish conference circuit, concurred. “Jumping into a Clubhouse room, especially smaller ones, is reminiscent of sitting in the conference hotel lobby with one friend and friends slowly calling over others who walk by,” said Sumekh. “You really do meet new people.”

For the uninitiated, this is how Clubhouse works: After being invited by a current app user, individuals sign up, create a profile, mark their interests and are then taken to a digital hallway where they are shown audio-only events happening at that time. Inside these discussion “rooms,” as they are called, each with a 5,000-user capacity, there are moderators, speakers and listeners.

When logging into the app, users see a list of their friends and contacts who are available to chat or who are in “rooms” engaging in discussions across a range of topics, including technology, Hollywood, music, investing, entrepreneurship and more.

For those seeking something specifically Jewish, at any given time there may be a discussion on collective action to combat antisemitism, Kabbalistic weekly wisdom, the Iranian-Jewish community and weekly Torah studies led by rabbis including David Wolpe of Los Angeles’s Sinai Temple and Adam Mintz of New York’s Kehilat Rayim Ahuvim.

While the popularity of the app has skyrocketed, new users must be recommended by an existing user. While this may turn some people off, social media influencer Nicole Behnam said exclusivity is the point.

“Now there is a pandemic, and there are no longer parties happening. Clubhouse is the party, and people want to be included,” she said. “You have to be invited to the party. If someone invited you to the app, now you are included.”

Since joining the app in November, Behnam has amassed a following of more than 44,000 users on Clubhouse. She hosts audio-only comedy shows and panel discussions with figures including author Neil Strauss (The Truth: An Uncomfortable Book About Relationships), and she has developed contacts she would not otherwise have been able to make, she said.

“I am very bold, and my personality shines on there,” Behnam said during a recent phone interview. “On Instagram, I can’t showcase my personality.”

Behnam is one of many in the Jewish community using the app. Others include journalist Bari Weiss; Eric Weinstein, a mathematician, economist and managing director at Thiel Capital; and Israeli actress-producer and activist Noa Tishby.

Wolpe has been using the app to hold weekly Torah conversations on Thursday evenings, and he likes the fact that he can listen in on sessions while, say, going on a walk in his neighborhood.

“The wonderful thing about Clubhouse that is not true about Zoom is you can walk, listen to it, speak on it, [and] can go to any room in the house,” the rabbi said. “The fact people are not seeing you is a tremendous advantage.”

In one recurring room called “Behind Closed Doors in the Persian Jewish Community,” created by Los Angeles Jewish community member Charlotte Broukhim, a speaker discussed how, in the Persian community, people are constantly forming opinions and judging him based on his social media posts.

This type of sharing is emblematic of how people are behaving on the app; because it is voice-only, users feel comfortable being vulnerable, said Broukhim, 23. “What I really love is, because it is a voice app, people can be so vulnerable and share such amazing and intimate stories.”

Broukhim joined the app a couple of months ago, nominated by her husband. She said her in-laws — even her husband’s grandmother — have since joined the app, challenging the idea of apps drawing exclusively millennials and Gen-Z.

Behnam joined the app in November after receiving an invitation from Daniel Aghachi, a fellow Angeleno, who has gained more than 600,000 followers on TikTok.

In a recent TikTok video, Aghachi called Clubhouse “the most unfiltered social media platform out there right now.”

Benham said the app is relatively uncensored compared to more established social media, including Twitter and Instagram, which are more actively policing public expression on their respective platforms.

“There is no censorship on this app. You can’t censor. If someone talks, we’re going to hear it. This isn’t Twitter. Twitter took down [former President Donald] Trump and other accounts,” Behnam said, referring to the social media company’s recent deplatforming of the former president and its renewed efforts to remove content and users violating its terms of service. “They have taken down tweets and marked them as not factual. On Instagram, [moderators] take down posts if they don’t like it. I have friends who have received notifications saying, ‘This is violating community guidelines.’”

While trying out the app, this reporter created a room and moments later, a former colleague joined the discussion. A nice conversation ensued, and when another person, a friend of the colleague, joined the room, networking was happening in real-time.

The appeal of the app is that people can be as engaged as they want to be, interacting with it as actively or as passively — and creatively — as they choose, said Mati Cohen, who recently created a room focused on U.S.-Iran relations that drew dozens of people. According to media reports, some people have joined rooms before bedtime and allowed themselves to be lulled to sleep by the white noise of other users’ conversations.

“I think the reason why it is so engaging is it is easy to enter,” Cohen said. “You don’t have to show your face; you can be anywhere; and other people can join. It’s very engaging, but the engagement level is how much you want to put in.”

Broukhim agreed. “It’s a very low barrier to entry to hop in a room,” she noted.

Sumekh is hosting a Clubhouse room later this month on the “Modern Day Esther: Being a Persian Jewish woman in 2021,” with the aim, she explained, “to raise up the conversations we see missing.”

As for future events serving the Jewish community, Broukhim expressed excitement about an upcoming live Megillah reading on Clubhouse on the evening of Purim.

“In the Jewish community there have been such incredible discussions that haven’t necessarily taken place in more formal settings,” she said. “To have [those opportunities] at a large scale, with Jews from around the world, is special.”