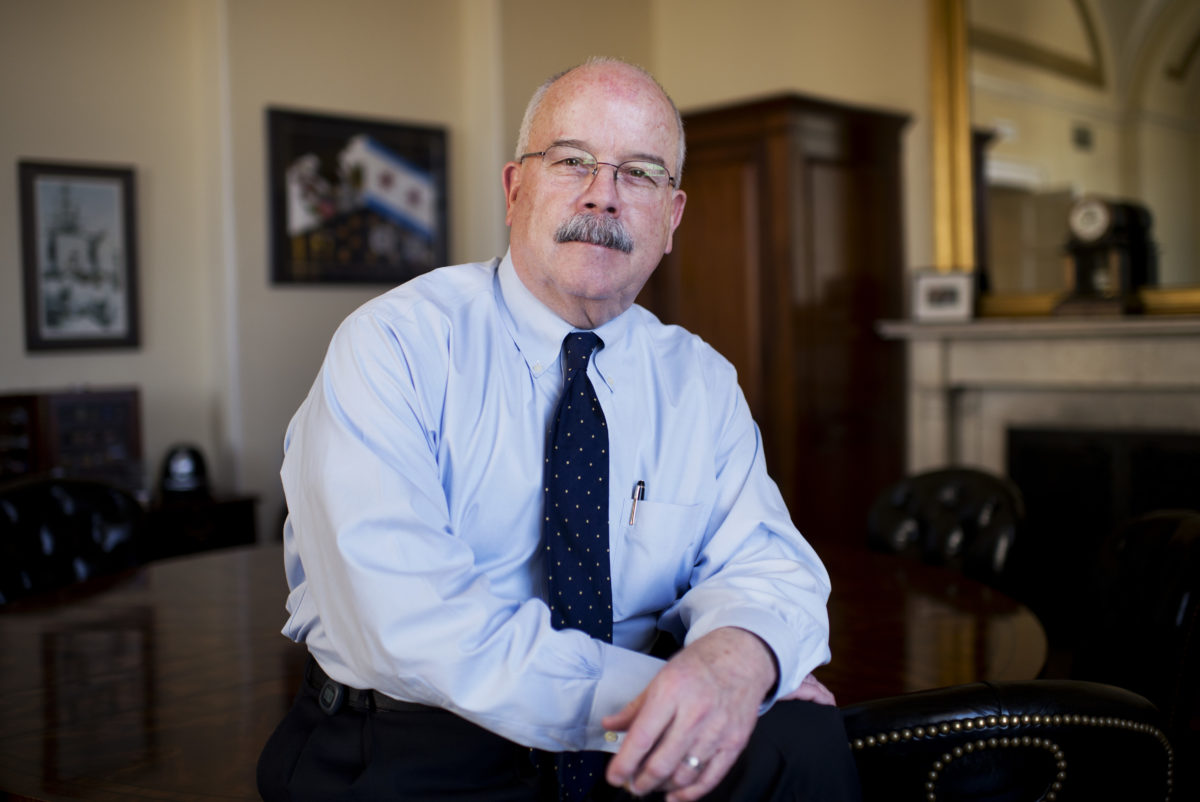 Terrance Gainer, former sergeant at arms, is photographed in his Capitol office.

In 2013, Terry Gainer, then the Senate sergeant-at-arms, completed a major proposal for a fence that would wrap around the perimeter of the U.S. Capitol. Mindful that the enclosure, known as the Capitol Gateway, would need to be attractive if lawmakers were to accept it, Gainer and his colleagues worked up plans for a wrought-iron fence with proper cornerstones, not unlike the one surrounding the White House, including 24/7 access points monitored by police and equipped with magnetometers to detect concealed weapons. In essence, though, the enclosure was a barricade, scalable with a ladder but still a crucial outer ring among several other concentric circles of security.

Needless to say, Gainer’s vision — which was never realized — now seems to have been extraordinarily prescient in view of the catastrophic security failures that gave way to pro-Trump insurrectionists who violently stormed the Capitol on Wednesday as lawmakers convened during a joint session of Congress to certify the Electoral College vote.

“I’ll tell you, the cost of not doing it was evident yesterday,” Gainer said in a phone conversation with Jewish Insider on Thursday afternoon, suggesting that his vision for a fenced-in Capitol would likely have prevented a takeover amounting to what many described as a failed coup.

In no way was Gainer gloating as he acknowledged, seven years after retiring from his Senate job, the remarkable circumstances that allowed for a ragtag mob of extremists to momentarily occupy the halls of Congress.

“The size of the department is quite adequate for normal business up there or even for large protests,” Gainer said, referring to the Capitol. “But it’s less than ideal when you get a few thousand people who come up there and they want to attack when they’re so charged up over the rhetoric from the president of the United States.”

During his tenure in various high-ranking federal law enforcement positions, Gainer, now 73, worked tirelessly to identify security gaps that would leave lawmakers vulnerable to attacks, particularly when he was the Capitol Police chief in the years immediately following Sept. 11, 2001.

But it was as sergeant-at-arms between 2007 and 2014, Gainer said, that he and his team members conducted an exhaustive inventory of the Capitol’s security apparatus, taking note of cameras, sensors and sniffers, and identified one glaring flaw. “We still hadn’t made the building secure from people wandering through it,” he told JI of the moment he realized that a fence would solve their problems. “So we started talking about it.”

The plan involved extensive research, and at one point, an idea was floated that construction might require rerouting Constitution and Independence Avenues, which flank, respectively, the north and south perimeters of the Capitol grounds.

Still, the fence was rejected because almost everyone viewed it as too costly, according to Gainer, who doesn’t remember the exact price tag. In addition, the concept of a barrier enclosing the Capitol grounds was off-putting because it symbolized a heightened security state. “Whenever you bring up the word ‘fence,’ it’s almost an immediate turnoff,” said Gainer, adding that his team tried to make the proposal appealing to lawmakers by including detailed annotations of cost projections as well as building materials.

Nobody bit. “We still didn’t have any takers from either the leadership of the various committees I presented it to or their staff members,” he said.

“People get put off when they see too much policing,” Gainer acknowledged. “So you have members who would like to see a lot more cops up there with guns and helmets and riot gear, and you see a lot of members who don’t want to see any police. The same goes with the public — and it’s even a little bit worse now, because of the divide in the country. It’s just not attractive to people.”

Now, following the incursion, a temporary seven-foot fence is being constructed around the Capitol complex, where it will remain for at least the next 30 days. Gainer, for his part, regards the new enclosure as only a provisional corrective that is nowhere near as effective as the fence he once designed. “If you’re trying to invest longterm and establish security and make it open, the way they’re doing it right now will answer temporarily some of the security needs,” Gainer said.

It doesn’t help, he added, that the fence is being hastily erected with what appears to be little consideration for how it blends into its environment.

“It certainly is unattractive. It looks standoffish. It kind of sends a message: ‘Stay away from me,’” Gainer said.

All things considered, however, Gainer thinks it is for the best that the fence is being constructed. He argues, though, that there must be a thorough assessment of what went wrong on Wednesday so authorities can determine how best to go forward.

“Do we have enough police in the right areas where they work at the right hours?” Gainer mused. “Where was the command structure? Who was making the decision? Who decided this, who decided that, and when the Capitol Police started losing control of the east front, who said that we gotta call in more people?”

While Gainer believes the Capitol Gateway plan, if realized, would have blocked armed rioters who easily broke through several inadequate lines of defense as they forced their way into the halls of Congress, he admits never imagining that such a scenario could have happened at all.

Even hours before the siege, as would-be rioters formed at a rally outside the White House, Gainer, who now works as an independent security consultant, recalled dismissing questions from interviewers who wondered, not without merit, if it was possible to break into the Capitol.