‘This is crossing the line. People are going to get hurt and possibly die,’ said Rep. Lou Correa 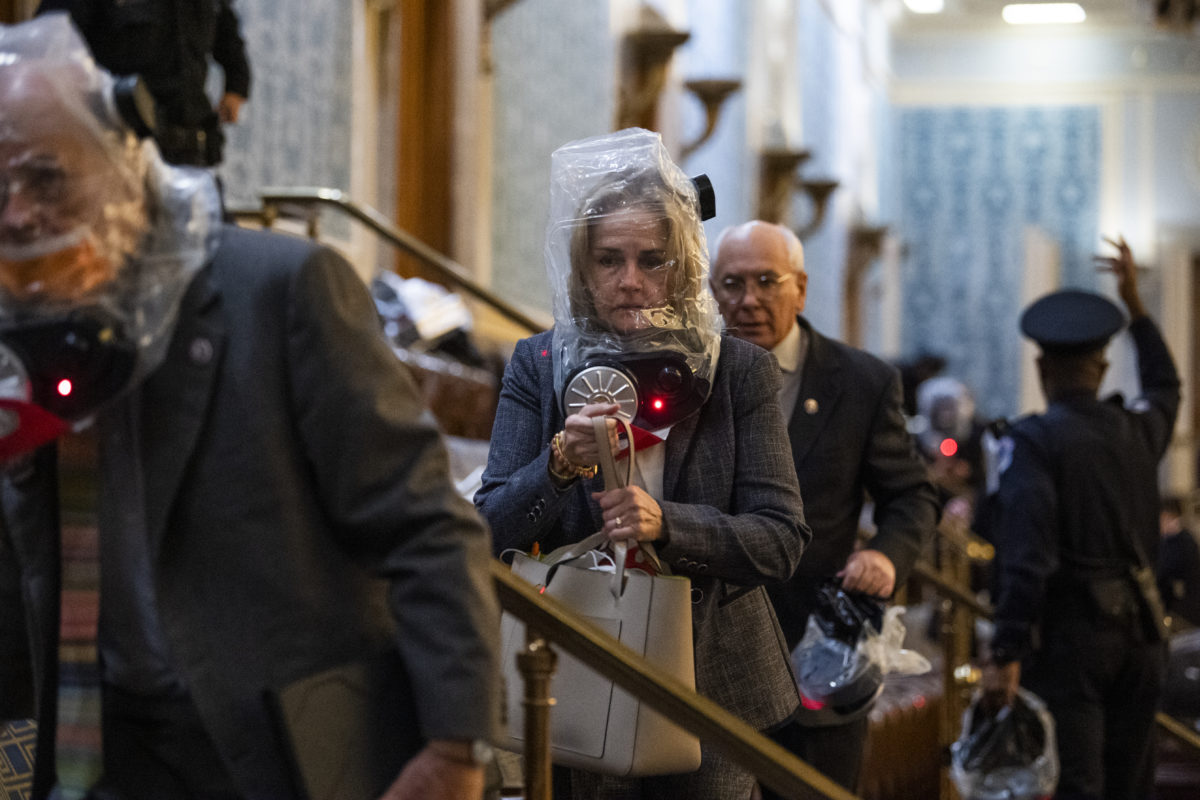 Rep. Madeleine Dean (D-PA) and other members take cover as protesters disrupt the joint session of Congress to certify the Electoral College vote on Wednesday, January 6, 2021.

Clutching still-humming emergency gas masks, members of the House of Representatives flooded the Longworth House Office Building on Wednesday afternoon fleeing a mob of violent protesters. Earlier, many members of Congress were forced to take shelter on the House floor after the pro-Trump rioters stormed the Capitol building during a joint session of Congress to count electoral college votes.

The chaos unfolded following a speech by President Donald Trump earlier Wednesday on the White House Ellipse calling on protestors to march on the Capitol.

Rep. Tim Burchett (R-TN), who told Jewish Insider that he was the last House member to leave the floor when it was evacuated, said Trump erred in telling supporters to “fight” the election results.

“He needs to tell people to do it in a peaceful manner. That’s what he should have done,” Burchett said. “The president needs to call off the dogs. He needs to get on the airwaves, he needs to call a press conference and say, ‘Everybody stand down, let Congress do its job.’” (Trump later tweeted a pre-recorded video telling protestors to “go home now,” but repeated the lie that the election was stolen.)

“He needs to tell them to quit all the nonsense and go home. That’s what the president needs to do. He needs to lead,” Burchett added. “He can do that, he needs to do it.”

The Tennessee congressman told JI the U.S. looks “like a banana republic” and “a bunch of idiots” amid the day’s events. “It’s not gonna solve anything, somebody’s going to lose their life over nothing. We need to address it at the ballot box.”

Burchett has publicly opposed the results of the presidential election, but said Wednesday that the riot was inconsistent with American values.

Other Republicans sought to deflect blame away from the president.

“There’s one thing to fight against the result. The other thing is to act in a disorderly way to breach the Capitol security. I don’t believe anybody is saying that is appropriate,” Rep. Greg Murphy (R-NC) told JI. “When you fight against something, you oppose it. I don’t think he meant physically.”

Democrats were quick to criticize the GOP for the chaos that reigned at the Capitol on Wednesday.

“[Trump] has certainly accomplished what he wanted to. If this doesn’t establish that he’s a reckless president, I don’t know what does,” said Rep. Jackie Speier (D-CA). Asked by a reporter if she blamed Trump, Speier scoffed and said, “Oh, come on.”

“He’s also been aided and abetted by Republicans who wanted to make a travesty of the Constitution and our obligations under that document,” she continued. “We have no authority but to open those votes and count them. If they’re all originalists, as they promote themselves to be, they have violated that by even having this debate.”

“This is crossing the line. People are going to get hurt and possibly die,” Rep. Lou Correa (D-CA) said. “This is not the way to exercise your first amendment rights.”