Before she was the inaugural poet, Amanda Gorman was a Milken scholar 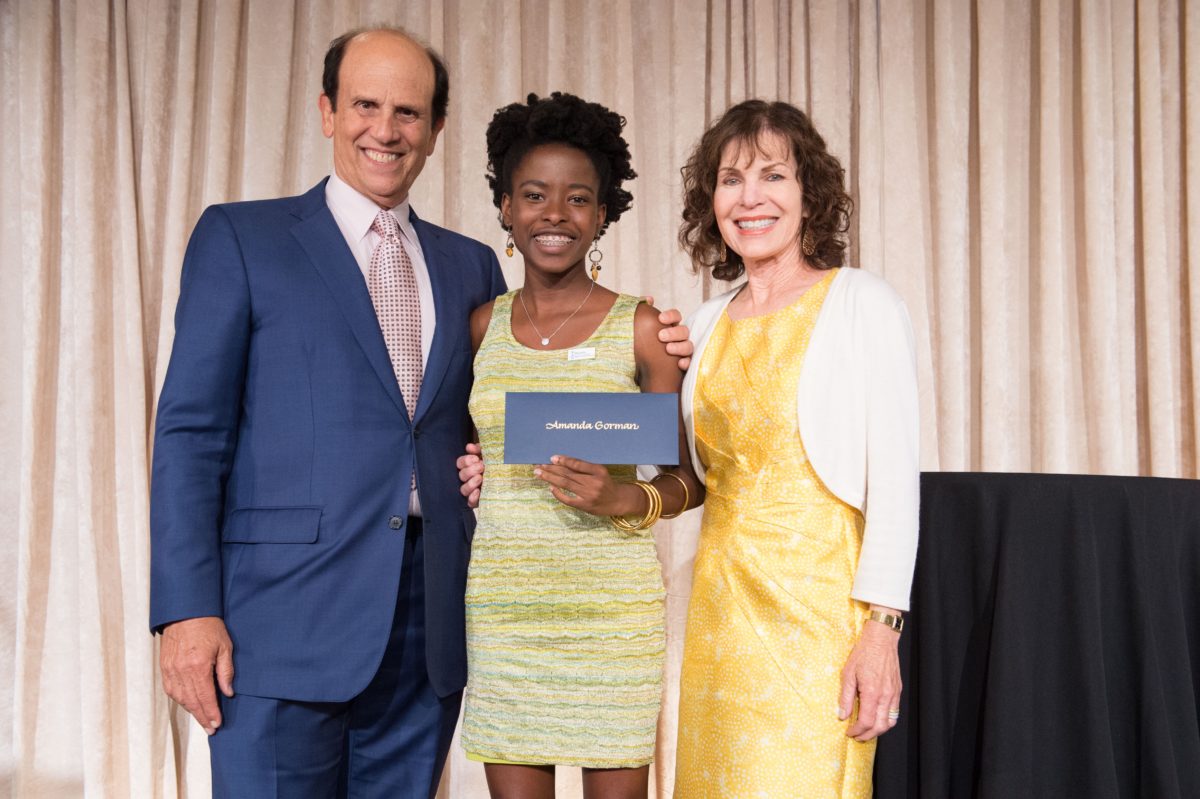 Amanda Gorman became the youngest inaugural poet and an overnight star after reciting her vivid spoken-word piece, “The Hill We Climb,” during the January 20 inauguration of President Joe Biden.

Surrounded by elected leaders, celebrities and officials, Gorman, 22, delivered riveting and timely lines including: “We’ve braved the belly of the beast/ We’ve learned that quiet isn’t always peace/ And the norms and notions of what just is/ Isn’t always just-ice.”

Millions of people watched Gorman’s show-stopping appearance, which made her the sixth-ever inaugural poet, joining an exclusive club that includes Robert Frost and Maya Angelou.

Much has been reported about Gorman since the inauguration — in 2017, she was named the inaugural National Youth Poet Laureate; she plans to run for president in 2036, the first election cycle for which she will be old enough to be eligible; and she has a book deal. But less known is her connection to the Milken Scholars program, a joint initiative of the Milken Family Foundation and the Milken Institute that awards exceptional students from Los Angeles County, New York City and Washington, D.C., with undergraduate scholarships.

The initiative also provides a support network to guide the scholars not only as undergraduate or graduate students but also in their professional careers.

Gorman was chosen for the highly selective program in 2016 when she was an 18-year-old high school senior at New Roads School, a private school in Santa Monica. She was chosen for her ability to overcome obstacles faced throughout her life along with her achievements in academic performance, community service and leadership, said Jane Foley, director of Milken Scholars.

“I remember meeting Amanda when she was 18 years old, when she marched that tiny little powerhouse [of hers] into the foundation, and we interviewed her,” Foley told Jewish Insider. “She was so charismatic, so much personality. I remember things she told us in that room. She believed in the power of language to effect social change. She’s doing that.”

Since philanthropists Michael and Lori Milken founded Milken Scholars in 1989, 500 students from approximately 100 high schools have been chosen for the program. Typically, Milken scholars attend elite universities, including Gorman’s alma mater, Harvard University, from which she graduated in 2020.

There is a 98% college graduation rate among participants in the program, according to Foley.

In an interview published last year with the Milken Center for Advancing the American Dream, Gorman said she was proud to be a Milken Scholars alumnus.

“When I learned I was a Milken scholar, it was this weird moment where dream meets reality,” Gorman said. “And that was such a powerful, exciting moment. Knowing Milken Scholars has my back is this interesting new phase where I am choosing my family and we are all committed to each other and each other’s success.”

During her formative years in Los Angeles, Milken Scholars was one of several organizations to provide Gorman with a supportive second family. As a high school student, Gorman became involved with WriteGirl, an L.A.-based organization pairing teen girls with women who are professional writers. The WriteGirl mentoring program introduced Gorman to Los Angeles-based poet-editor Dinah Berland, who is Jewish and became Gorman’s mentor.

When Gorman learned she would be the inaugural poet back in December, she struggled to keep the news a secret. After her selection was publicly announced, she reached out to those close to her, including Berland, to share the news.

In an interview with Jewish Insider, Berland recalled seeing Gorman perform her work for the first time at the Museum of Contemporary Art in Los Angeles, when Gorman was a junior in high school.

“She was far superior to any of the other kids in terms of her ability, not only her reading but her writing,” Berland said. “I was sitting outside afterward, she walked by, I jumped up and said, ‘You are really talented. I hope you take this seriously.’ Very soon after, she was chosen as youth poet laureate in L.A.”

Berland said she accompanied Gorman to Washington, D.C., in 2017 when Gorman recited a poem for an audience at the Library of Congress. This performance put Gorman on First Lady Jill Biden’s radar, landing Gorman on the shortlist of poets for Biden’s inauguration two years later.

While Berland is no longer Gorman’s mentor, the two are still in touch, and on Inauguration Day, Berland watched from home as her former mentee delivered her powerful poetry from the U.S. Capitol.

“I was thrilled beyond belief, but I wasn’t surprised she rose to the occasion because that is what Amanda does, and she does it gloriously,” Berland said. “I am so proud of her.”