'Having served at the U.N. for five years, I come back to Israel with a lot of experience,' Danon said of his political future 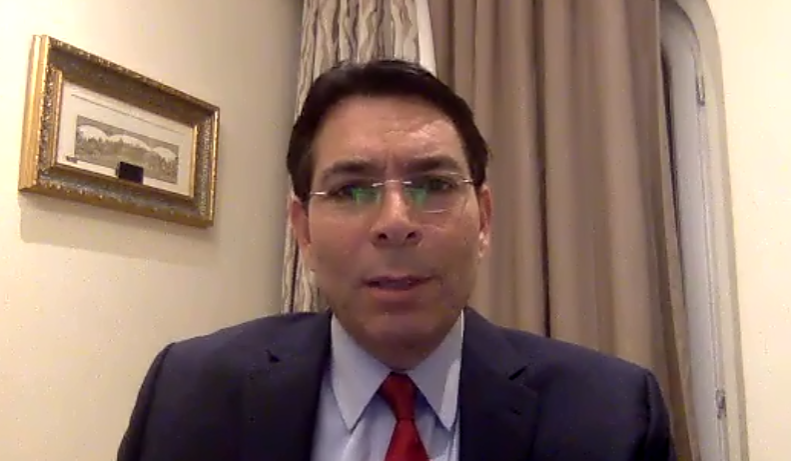 Israel’s outgoing ambassador to the U.N. Danny Danon suggested on Tuesday that Israeli Prime Minister Benjamin Netanyahu is determined to move ahead with his plan to annex parts of the West Bank irrespective of global pressure or the fallout from COVID-19.

Up to Bibi: “I think it is up to the prime minister to decide when he wants to bring it up, how he wants to bring it up,” he told Jewish Insider on a farewell Zoom call with reporters. Danon pointed to the unity deal signed with Blue and White leader Benny Gantz that gives the two men equal say in the decision-making process — except when it comes to annexation.

Done deal: Cautioning Israel against the move — as a majority of House and Senate Democrats have done in recent weeks — “is not affecting Israelis and I don’t think it’s affecting the leadership,” Danon asserted.

Talk it out: Reacting to a recent letter sent by a dozen members of Congress threatening to condition military aid to Israel if the government moves ahead with annexation, Danon said, “I would advise our friends and allies, Don’t threaten Israel. You have concerns? Speak to us. You can have concerns, you can criticize, but don’t [issue] threats.” Danon suggested that Rep. Alexandria Ocasio-Cortez (D-NY), who spearheaded the letter, is just “looking to make headlines, but she cannot get anywhere. She cannot threaten the bond between Israel and the U.S. I’m not too worried about that, and I’m sure she will look for more opportunities to create more headlines in the future.”

What’s next? Danon, who has in the past expressed a desire to run for prime minister after Netanyahu retires, told JI he’ll tout his diplomatic bona fides and international relationships to gain an upper hand over his Likud colleagues. He is returning to Israel at the end of July and will be replaced by former Regional Cooperation Minister Gilad Erdan. “Having served at the U.N. for five years, I come back to Israel with a lot of experience,” Danon said. “It will be valuable for me, personally, and also for the State of Israel that I would be able to use my relationships and understanding of the international community to benefit Israel. I’m sure that in any debate that I would be participating in the future, I will also be able to bring in the international aspects and the knowledge that I have gained at the U.N.”