Will Gantz and Ashkenazi influence U.S. support for annexation? 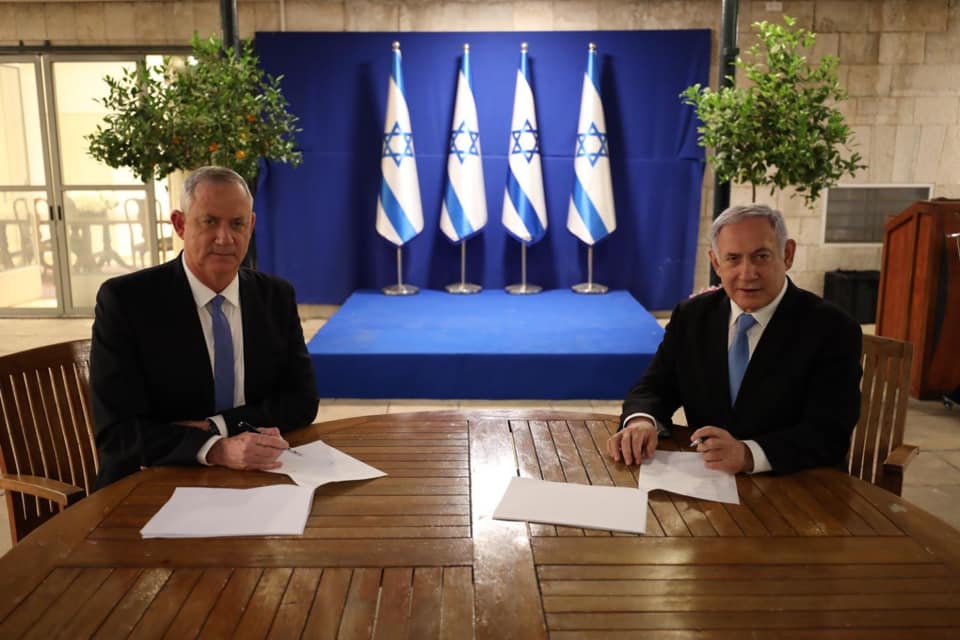 Secretary of State Mike Pompeo will arrive in Israel on Wednesday morning ahead of meetings with top Israeli officials, who are expected to broach the topic of annexation — a key policy objective for Prime Minister Benjamin Netanyahu — with Washington’s top diplomat following the formation of a unity government earlier this month.

Schedule: Pompeo is scheduled to hold separate meetings with Netanyahu, Blue and White leader Benny Gantz and MK Gabi Ashkenazi, who is expected to serve as foreign minister for the first half of the unity government’s term. Pompeo’s visit comes a day before the swearing-in of the rotation government, which will take place at the Knesset on Thursday.

On the agenda: The COVID-19 pandemic and Netanyahu’s announced plan to move forward on partial annexation of the West Bank are expected to dominate the meetings. Pompeo told Israel Hayom earlier this week that annexation — which Netanyahu has said could happen as soon as July 1 — is “an Israeli decision” and that the aim of his trip is to bring Israeli leaders “up to speed on the progress we think we are making on President Trump’s vision for peace.”

Why now? Former U.S. Ambassador to Israel Dan Shapiro tells JI, “Pompeo has been spending much of his time lately talking to far-right, even fringe media outlets, mostly to bash China on coronavirus. There is merit to some of the charges, but the venues suggest that the real goal is to fire up Trump’s base before the election. Unilateral annexation serves a similar purpose. It has no mainstream public support in the American public, but it excites portions of Trump’s base. In the midst of a pandemic, he is traveling Israel to urge the Israelis forward on annexation.”

Bargaining chip: Israeli author Ze’ev Chafets suggested that Pompeo is seeking to persuade the new Israeli government to change its attitude towards China as a show of support for the Trump administration’s tough approach to Beijing. On Tuesday, Israel notified the Trump administration it will reconsider a water infrastructure bid with a Chinese-linked company amid pressure from Washington.

Potential outcomes: Meeting with Pompeo will provide an opportunity for Gantz and Ashkenazi to sway the administration to limit the scope of annexation, Tal Shalev, the chief political correspondent for Walla! News, told JI. Shalev added that, “first and foremost,” their goal is to “gain some level of trust” with Pompeo to make sure “they also have someone to whisper to” in Washington.

Testing the waters: Shalom Lipner, a veteran of 26 years in the prime minister’s office, told JI that Pompeo is hoping “to take the pulse of Israel’s new leadership toward implementing the President’s vision amid the ironic circumstance of a Trump ‘coalition’ that is more enthusiastic about expanding Israeli sovereignty — which will buoy Trump’s popularity among his base at a time when his re-election is looking more doubtful than ever before — than are significant parts of Netanyahu’s incoming cabinet.” Lipner added that what Pompeo hears from his interlocutors in Jerusalem “could offer clues into whether the way forward looks more like Jared Kushner’s yellow light, David Friedman’s green light or even a nominally red light” on annexation that would force Netanyahu to settle for a more cautious and symbolic move that doesn’t upset his new partners and complicate relations with Israel’s allies.

Expectations game: Speaking on a webcast last month, Senator Chris Coons (D-DE) — a surrogate for the Biden presidential campaign and a likely candidate for Biden’s secretary of state — expressed optimism that Gantz and Ashkenazi would use their political leverage to block unilateral Israeli actions. Shapiro told JI, “Gantz and Ashkenazi are known to be concerned about the effect unilateral annexation could have on security cooperation with the Palestinian Authority, on stability in Jordan, and even on the Israel-Jordan peace treaty itself. With their security backgrounds, they may also point out the complex technical, budgetary, and security implications of determining the boundaries of the areas to be annexed. None of that can be resolved by July 1.”

Take your time: Israeli Channel 13’s Barak Ravid reported on Wednesday that the Trump administration does not view July 1 as a “do or die” date for beginning the process of annexation. U.S. officials indicated that the U.S. top diplomat will not make any commitments on this issue while in Israel.