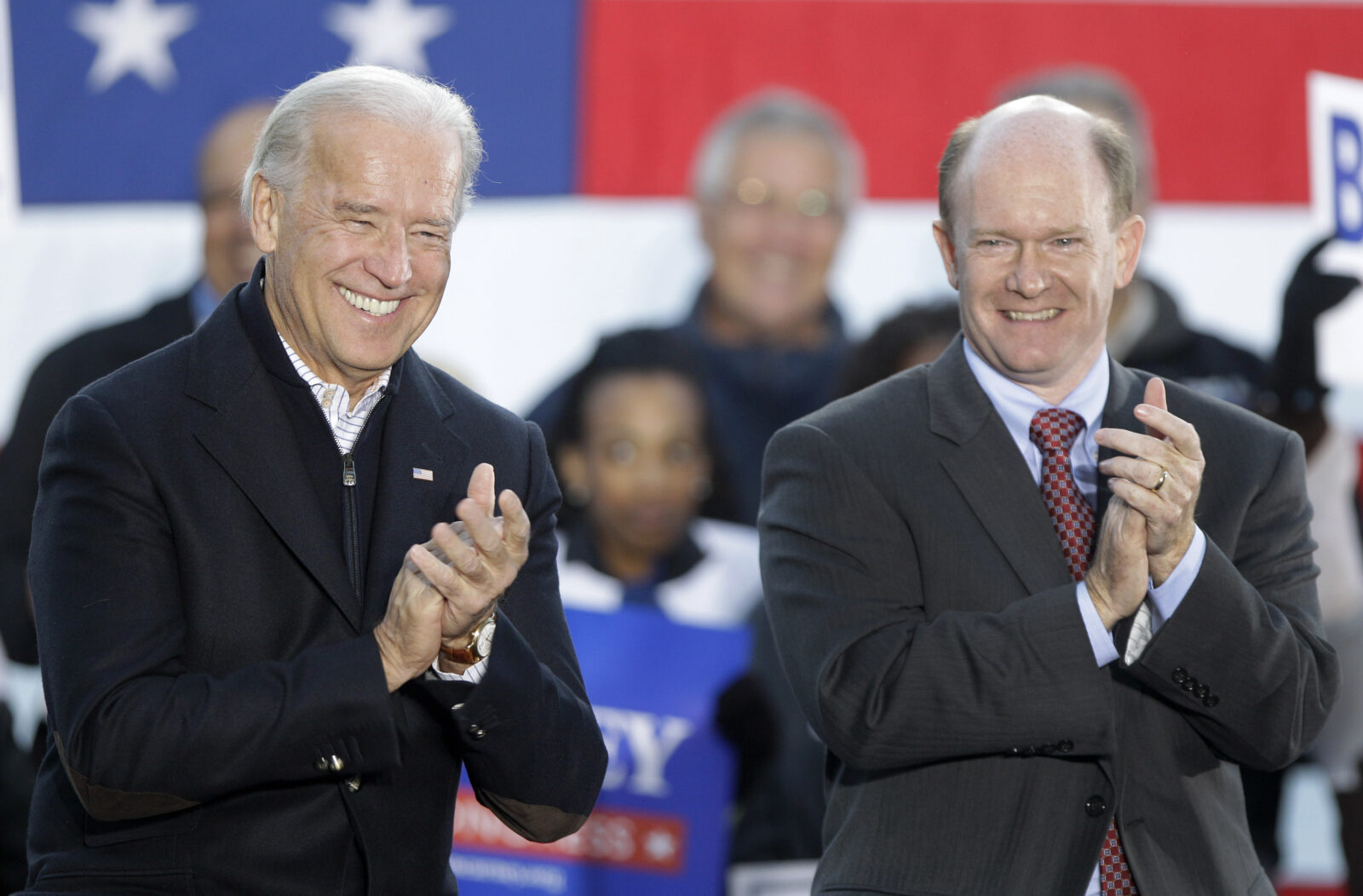 On a Friday evening in February, former Sen. Joe Lieberman stepped out of his hotel in Germany en route to the second annual presentation of the John McCain Dissertation Award, on the sidelines of the Munich Security Conference.

The destination was a restaurant more than a mile away, and Lieberman, who is Shabbat-observant, was planning to set off on foot for the long walk when he ran into his former colleague, Chris Coons, the junior senator from Delaware who was also attending the dinner. To Lieberman’s surprise, Coons decided to accompany him. “It was a great opportunity for conversation,” Lieberman fondly recalled to Jewish Insider.

“He is a thoughtful internationalist and an extraordinary person,” Lieberman said, citing Coons’s longtime interest, among other topics, in issues associated with Africa, “which is unusual for members of the Senate.” Lieberman noted the similarities in their worldviews. “He understands the special relationship between the U.S. and Israel, but he also understands the importance of our alliances in the world,” Lieberman explained, before opining that “Chris would make a wonderful secretary of state.”

Lieberman isn’t alone in thinking that the senator would be a strong contender to lead the State Department if Coons’s Delaware predecessor is successful in November. Jewish Insider discussed the possibility of Joe Biden selecting Coons for Foggy Bottom’s top job with a dozen foreign policy experts, Delaware insiders and Jewish community leaders.

Aaron David Miller, who spent more than two decades working at the State Department under six different administrations, suggested that Biden would need a “larger-than-life figure” to help his administration restore global confidence in American leadership after four years under a Trump administration. “Biden needs a secretary of state who truly can stride the world stage, someone with charisma,” he said, “someone with political experience, a figure that has tremendous gravitas.”

Coons seems to fit the mold, observers say, given the 56-year-old Democrat’s longstanding ties with the former vice president as well as his extensive foreign policy experience and relationships around the world.

“Senator Coons would make an excellent secretary of state,” former Delaware Gov. Jack Markell, who knows both Biden and Coons well, told JI. “He has terrific global experience both before and after entering the Senate, and he is widely respected in the Senate Foreign Relations Committee and around the world.”

Stuart Eizenstat, former U.S. ambassador to the European Union and an informal advisor to Biden, echoed that assessment, telling JI that Coons “would be a very strong candidate” for the role.

Coons, a former New Castle county executive, was elected to Biden’s old Senate seat in 2010, and quickly asserted himself as an estimable figure in the foreign policy realm, and was named chair of the Senate Foreign Relations Subcommittee on African Affairs during his freshman year.

His experience also extends to China, where he was recently part of a delegation to address fentanyl trafficking.

“Coons has been building that portfolio for a number of years,” said David Redlawsk, a professor of political science at the University of Delaware who recently moderated a talk on the relationship between China and the United States that included Coons as a panelist.

Mark Mellman, president and CEO of Democratic Majority for Israel, noted that Coons would “certainly be” one of the “really outstanding choices” that Biden could make. “He’s deeply experienced in foreign policy from his service on the Foreign Relations Committee, he’s strongly committed to the U.S-Israel relationship, and he’s an extraordinary, bright and capable senator who has demonstrated an ability to bring people together around policy initiatives,” Mellman said. “And those are all important qualities for a secretary of state.”

Coons — whom Politico once described as “the GOP’s favorite Democrat” — has developed a reputation for bipartisanship. In 2018, the Delaware senator cast the “present” vote that allowed Mike Pompeo’s confirmation as secretary of state to advance in the Senate Foreign Relations Committee — a move that brought former Republican Sen. Bob Corker to tears.

“During my time in the Senate, I worked very closely with Chris Coons on foreign policy issues,” Corker recalled in comments to JI. “We traveled internationally together on several occasions to take a closer look at how U.S. policies work in practice and built a strong working relationship. He has a deep understanding of global issues and a true heart for the developing world. I enjoyed working with him and know he will continue to be a strong advocate for U.S. global leadership no matter what the future holds for him.”

The senator’s history of reaching across the aisle could serve him well if he gets the secretary of state nod, said Nancy Karibjanian, director of the University of Delaware’s Center for Political Communication. “There wouldn’t be a real learning curve,” she said. “He already would be capable of doing the job.”

And his knack for bipartisanship extends to lawmaking. In January, Coons and Sen. Marco Rubio (R-FL) introduced legislation that would authorize $3.3 billion in annual security assistance to Israel. “The events of the past few days remind us of the importance of U.S. assistance to Israel’s security,” Coons tweeted at the time.

More recently, in mid-April, Coons worked with Sen. Ted Cruz (R-TX) to push for a $12 million appropriation that would encourage cooperation between Israel and the United States in the effort to deter the novel coronavirus.

If he joins a Biden administration, Coons would potentially have to address Israel’s unilateral annexation of parts of the West Bank. On a recent webcast hosted by the Jewish Democratic Council of America, Coons expressed hope that Blue and White leader Benny Gantz and Gabi Ashkenazi — who is expected to serve as Israel’s foreign minister for the first half of the unity government’s term — would use their political leverage to block unilateral action. But the Delaware senator declined to elaborate in the webcast on how a Biden administration would address annexation.

Halie Soifer, executive director of the JDCA, who served as Coons’s senior foreign policy advisor from 2010 to 2014, described her former boss as “a principled and values-driven leader when it comes to U.S. foreign policy, including on the U.S.-Israel relationship.”

“The vice president has learned to count on Chris,” said Miami-based developer Michael Adler, who is considered to be Biden’s closest friend in the Jewish community. “Chris doesn’t just bring politics. He brings a deep concern and knowledge of the issues so that decisions can be made based on facts and not based on political motivations. He’s been able to develop relationships with Republicans and has worked closely across the aisle, especially on Iran and other foreign policy issues. That also is something that the vice president did when he was senator.”

Coons, who currently serves as vice chair of the Senate Ethics Committee, was among the first to endorse Biden for president back in April 2019. “That is a reflection of how close they are,” Soifer averred.

American Jewish Congress President Jack Rosen, a longtime Biden supporter, hosted Coons for breakfast at his home in New York earlier this year. Though the two didn’t discuss the matter, Rosen told JI that Coons’s closeness to the presumptive Democratic nominee and his pro-Israel record would make him “an excellent choice for America and for the pro-Israel community.”

It remains to be seen, of course, if Coons is interested in the role should Biden make it to the White House. “This is a very hypothetical discussion,” Lieberman acknowledged. “First Joe Biden has to get elected, then he has to decide he wants Chris Coons for his secretary of state and then Chris Coons has to decide he wants to do it as opposed to staying in the Senate but, in my opinion, Chris would make a wonderful secretary of state in every way, not just for Israel.”

A spokesperson for Coons did not reply to a request for comment.

Stuart Grant, an attorney and Democratic donor in Delaware who has known Coons for 25 years, told JI that the senator may very well be interested in staying on as a member of Congress.

But even if he remains the junior senator from Delaware, there is no doubt, Grant concluded, that Coons would be an asset to a Biden presidency. “He would be very integral, if there is a Biden administration,” Grant said, “in advancing our foreign policy.”