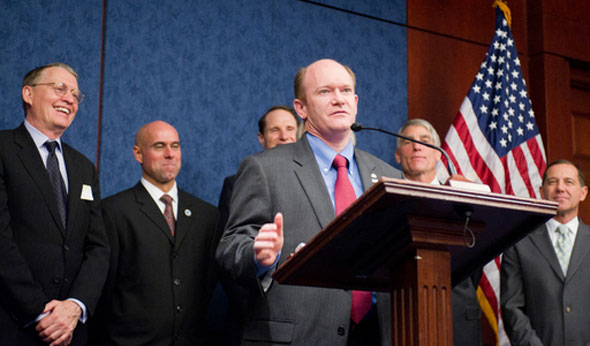 Senator Chris Coons (D-DE) expressed hope on Tuesday that Blue and White leaders Benny Gantz and Gabi Ashkenazi will use their newfound political leverage to block a unilateral move by the new Israeli government that would apply sovereignty to Jewish communities in the West Bank.

“My hope would be that Ashkenazi as foreign minister and Gantz as defense minister — in what will be internal deliberations — given their deep experience in the IDF and given the security consequences of an abrupt move, would caution Bibi [Netanyahu] against some significant step like this,” Coons said during a webinar, which also featured former Vice President Joe Biden’s senior foreign policy advisor Tony Blinken and was hosted by the Jewish Democratic Council of America. Gantz and Ashkenazi are planning to join Israeli Prime Minister Benjamin Netanyahu’s new unity government, pending a High Court hearing on the terms of the rotation deal.

Wait-and-see approach: The Delaware senator, speaking from Iowa as a surrogate for the Biden campaign, declined to elaborate on how a Biden administration would address annexation. “It’s hard to exactly prejudge the circumstances on the ground as of January of next year, and we only have one president at a time,” he asserted. Coons added that as a member of the Senate Foreign Relations Committee, it is important for him to not only express his views “clearly and strongly, but to also be measured about putting any constraints on what a Biden administration would look like.”

Reserving judgement: Blinken, who served in the Obama administration as a national security official and deputy secretary of state, said on the webcast that he was “not going to prejudge what we might do or not do in the context of a Biden administration because “lots of things can happen between now and then.” But he stressed that the presumptive Democratic presidential nominee “has been literally opposed to annexation,” noting that Biden has been “on the record several times [that] unilateral steps taken by either side that makes the prospect of a negotiated to a two-state outcome less likely is something he opposes, and that includes annexation.”

Shared interests: The former diplomat emphasized that the focus of a Biden administration would be to revive and “ultimately advance” the prospects of “two states for two people,” calling such it “the only way to really assure” that Israel remains secure, democratic and Jewish, while moving ahead with unilateral annexation “is bad” for Israel. “In many ways, pulling the plug on a two-state solution is pulling the plug, potentially, on an Israel that is not only secure but is Jewish and democratic — for the future,” Blinken explained. “That’s not something any of us, who are ardent supporters of Israel, would want to see. And that’s why it is so vital that we try to find ways to get back to a place where in the first instance steps are not being taken that make what is already incredibly difficult virtually impossible, and ultimately some new foundation is built upon which we can actually build toward two states — not minimizing how incredibly difficult that would be.”

Jerusalem embassy: Blinken suggested that a Biden administration would keep the U.S. embassy in Jerusalem, telling viewers that reversing President Donald Trump’s decision and moving the U.S. Embassy back to Tel Aviv “would not make sense practically and politically.”

Sharing is caring: Former U.S. Ambassador to Israel Daniel Shapiro said during a webcast hosted by Israel Policy Forum earlier Tuesday that he is hopeful that the incoming Israeli government takes into account the upcoming U.S. presidential election before making a decision on annexation. Shapiro noted that Biden and senior Democratic members of Congress have come out in opposition to unilateral annexation because such a move would be “damaging to American interests and deeply damaging to the future of strong bipartisan support” for Israel. “It’s important for people in both countries to continue to take steps that ensure the long-term bipartisan nature” of the U.S.-Israel relationship, Shapiro said.