U.K. Chief Rabbi Mirvis reflects on his historic trip to the UAE

“I was continuously pinching myself — ‘is this really happening,”’ Mirvis said 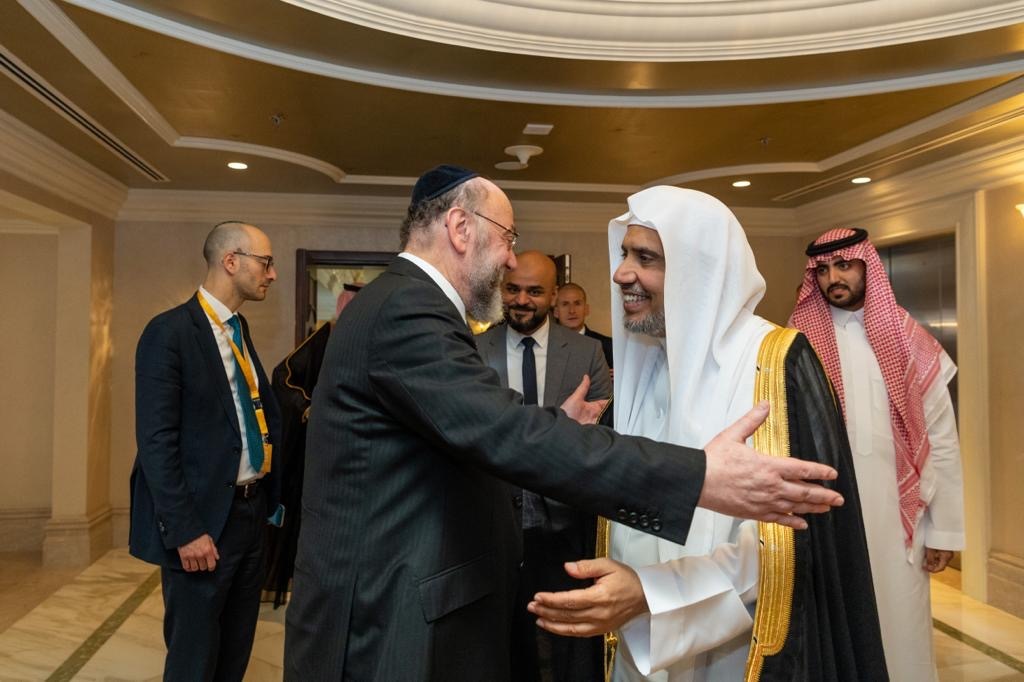 Office of the Chief Rabbi

When Britain’s Chief Rabbi Ephraim Mirvis saw the Arabic writing on the plane that would fly him from London Heathrow to Abu Dhabi Airport last week, the weight of the moment truly sank in. Not only was it his first time traveling to a country in the Middle East other than Israel, but he was making history as the first U.K. chief rabbi to make an official visit to an Arab country.

“I’d previously flown through Dubai airport and transferred to Australia, but to actually be part of the Arabic culture, to be welcomed by them and be treated in a royal way — they went out of their way to show acceptance and warmth and I certainly welcome that enormously, because that is a sure sign that that’s where they want their society to be going in terms of attitude towards the Jewish people,” Mirvis told Jewish Insider in a phone interview on Tuesday from Bucharest, where he was participating in a Conference of European Rabbis standing committee meeting.

“I was continuously pinching myself — ‘is this really happening,’” Mirvis said. His dream is that visits of this kind will become a new type of normal, and he is confident that it will happen soon.

Mirvis had been hoping to make a trip of this kind “for a good while,” and asserted that “if not for COVID, it would have happened some time before.”

“I have been cultivating connections and relationships within global Muslim leadership over a number of years,” he said. “And certainly the Abraham Accords provided that window of opportunity, not just for me to engage personally with Muslim faith leaders, but well beyond that — to be welcomed very warmly officially to the UAE for the Abu Dhabi Forum for Peace, to participate and be prominently featured in that, plus engagement with the countries political leaders and of course having a chance to meet with the growing Jewish communities in Abu Dhabi and Dubai.”

During the three days he spent in the Gulf, Mirvis delivered an address to the conference, engaged in the activities of the forum, met with Minister of Foreign Affairs Sheikh Abdullah bin Zayed Al Nahyan and had lunch at the home of Minister of Tolerance Nahyan bin Mubarak Al Nahyan. “It’s the only country in the world which has a minister of tolerance,” Mirvis noted.

“Those engagements were very significant, warm, very welcoming,” Mirvis remarked. “And then of course, engaging with members of the Jewish community in Abu Dhabi and Dubai. There was a sense of genuine warmth, a sense of thrill. We are still now going through a period of firsts, so I had a small role to play in being the first chief rabbi to visit an Arab country and appearing before the forum was definitely a significant first.”

Mirvis heard from both political and faith leaders that there is an earnest desire for the Abraham Accords to spread to other countries in the region.

“Obviously, the big question relates to Saudi Arabia, which would be the ultimate game-changer,” Mirvis said, remarking that it was a common talking point that came up in many of his conversations. “The general feeling was that it is a matter of time, some suggesting sooner and some later.”

Jewish-Muslim interfaith dialogue was the focus of the conversations he held with the Emirati ministers, he said, and how such efforts can be further developed after the Abraham Accords opened a window.

“One of my key messages was that what’s taking place at what I call the top of the pyramid needs to filter down to a grassroots level, that must be a priority for us worldwide,” Mirvis said, noting that he also discussed this topic when he met with Pope Francis in Rome.

“I am delighted to report that world faith leaders in general enjoy a very good and healthy relationship but that the ultimate challenge must be to guarantee that the followers of our faith engage in similar fashion,” Mirvis stressed. “We shouldn’t underestimate the power of the image of faith leaders engaging, it sends out an exceptionally positive message, it is internalized and I have no doubt that it has positive consequences. But at the same time we need to have deeper conversations, we need to tackle some of the more thorny and challenging issues because it’s the only way in which we will genuinely have any chance to shape hearts and minds of the future.”

Having spent the anniversary of Kristallnacht, which marks the date in 1938 when hundreds of synagogues and shops were destroyed by the Nazis, in the UAE, Mirvis reflected on a positive trend in the country: encouraging the growth of its Jewish community and opening more synagogues.

One of those synagogues will stand next to a church and a mosque in the Abrahamic Family House interfaith complex in Abu Dhabi, which is due to open in February, and which will also house an educational center. Mirvis said the center will “certainly enhance the engagement of world faith leaders and is likely to serve as a pivotal and central stage for interfaith activities to happen in the future.”

“In a world which is veering toward the extremes, it is so refreshing to find a society going out of its way to speak about tolerance and trying its utmost to have a more moderate religious stance,” Mirvis remarked.

This effort for inclusion and tolerance can also be found in the culinary arena. The highlight of Mirvis’s trip to the top of Dubai’s Burj Khalifa, the tallest building in the world, was the experience of having a meal at the site’s “glorious” kosher restaurant on the ground floor.

“We collectively are on a very exciting journey and at the beginning of a wonderful development which, please G-d, will not only benefit our relationships in the UAE and other countries engaged in the Abraham Accords, but right across the region and please G-d we will see some wonderful developments from this.”

Asked whether he already has plans for another trip of this kind, or perhaps a reciprocal visit, Mirvis chuckled, before saying: “watch this space.”