Israel’s election: What happens next?

With all votes counted, Netanyahu looks set to return to power, but there are still some challenges he must overcome 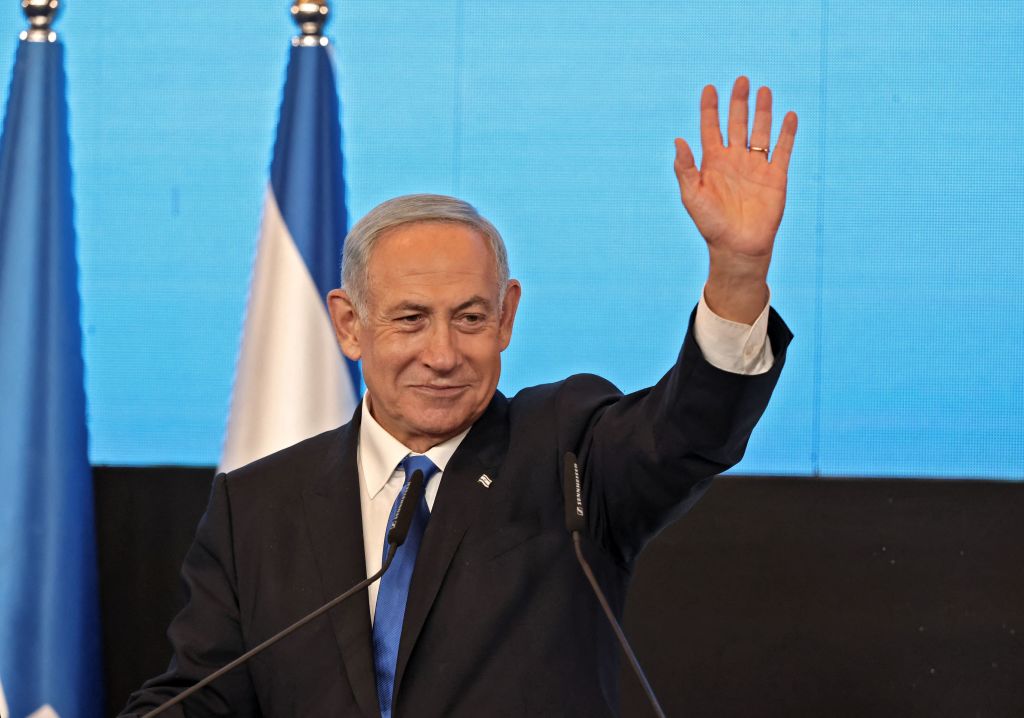 Israel's ex-premier and leader of the Likud party Benjamin Netanyahu addresses supporters at campaign headquarters in Jerusalem early on November 2, 2022, after the end of voting for national elections.

After Tuesday’s general election in Israel, former Prime Minister Leader Benjamin Netanyahu is poised for a comeback after more than a year leading the country’s opposition. While his path to the premiership seems close to assured, there are still a few stages, and some challenges, he must overcome in order to establish Israel’s 37th government.

Israel’s election laws mandate that the vote counts must be completed within eight days of the election, including any recounts or discrepancies. On Nov. 9, after tallying up ballots, the chairman of the Central Election Committee, Justice Yitzhak Amit, will announce the final figures.

Then all attention turns to Israeli President Isaac Herzog, who will invite the leaders of each party that will make up the 25th Knesset for consultations on who should be tasked with forming the next government. He will then have seven days to consider the candidates – historically, presidents have usually selected the head of the largest party or the party with most support from other factions. In this case, that person is likely to be Netanyahu.

If Netanyahu is asked to form the government, he will then have 28 days to work through the intricate process of forming a coalition, which will involve reaching agreements on ministerial roles and other key positions in the Knesset and beyond.

If Netanyahu, or whomever the president asks to form a government, is not successful, then the coalition-building period may be extended, or the president can call for another round of elections. Both those scenarios happened over the past four years, with Israelis going to the polls five times in total.

This time around, however, Netanyahu’s chances of forming a coalition seem more likely. With all the votes counted, the former leader’s Likud party has 32 seats in the Israeli parliament, out of a possible 120. The bloc of right-wing and religious parties that support Netanyahu collectively holds 65 seats – giving Netanyahu the majority he needs in parliament and he will need to decide if he wants to build a coalition with these factions.

To form a coalition, Netanyahu will likely have to work with the far right-wing party, Religious Zionism, whose members have been celebrating their unprecedented win on election night. The party’s demands – as expressed during their weeks of campaigning – include appointing the controversial leaders,  Bezalel Smotrich and Itamar Ben-Gvir, once considered fanatical and marginalized, as defense minister and public security minister respectively.

In addition, Smotrich, who served in Netanyahu’s previous government as transport minister, has said he plans to overhaul the country’s judicial system, which he sees as corrupt, biased and far too powerful. Ben-Gvir, a disciple of Meir Kahane, an American rabbi and Knesset member who was assassinated for his extremist views in New York in 1990, has called to release Jews convicted of terror offenses and take a much tougher approach towards Arab terror.

“Netanyahu is smart enough to know that it may harm Israel’s international standing, especially vis-a-vis the U.S., Europe and possibly the Arab world, but in his mind, this is now a high-class problem to have, given the fact that he was removed from office a year ago, and now he’s on his way back,” Neri Zilber, a Tel Aviv-based journalist and advisor to Israel Policy Forum, told Jewish Insider.

“Arguably he very likely believes that he has the maneuvering skills and rhetorical ability to finesse the issue vis-a-vis foreign capitals,” he continued, adding, “Any kind of contest between Israel’s international standing and Netanyahu’s own personal and political needs, there’s arguably no contest in that.”

However, Zilber said that Netanyahu was likely now trying to decide what ministry he could give Ben-Gvir that would cause the least amount of damage.

“Netanyahu is smart enough to know that this is a crucial issue, not just in terms of Israel’s foreign relations, but also just the proper functioning of his government,” he added. “The core issue facing Netanyahu  will be how he manages his far-right allies.”

Yohanan Plesner, president of the Israel Democracy Institute, also said Netanyahu faces a challenge in including the far-right faction in his government.

“While Netanyahu has been criticized in the past for his refusal to make significant progress with the Palestinians towards a peace process, he has also not made any major changes in the status quo in the West Bank, despite the pressure from his allies in the settlement movement,” Plesner said.

“On both diplomatic and security matters, Netanyahu has proven to be a cautious leader, and this is not expected to change,” he continued. “The question now is whether Ben-Gvir and other right-wing elements in his future government coalition moderate their behavior once they take up ministerial positions, or will they fan the flames of unrest in Jerusalem and the West Bank – that Netanyahu will be forced to deal with.”

Some pundits say Netanyahu might try to look for a way to work around Ben-Gvir and leave him out of the government entirely. This could mean splitting up the Religious Zionism faction or finding a way to work with Gantz or Lapid, both of whom have insisted multiple times that they will not join a Netanyahu coalition.

Either way, finally after five elections, Netanyahu looks set to return to the helm and give Israel a semi-stable government – at least for a year or two.