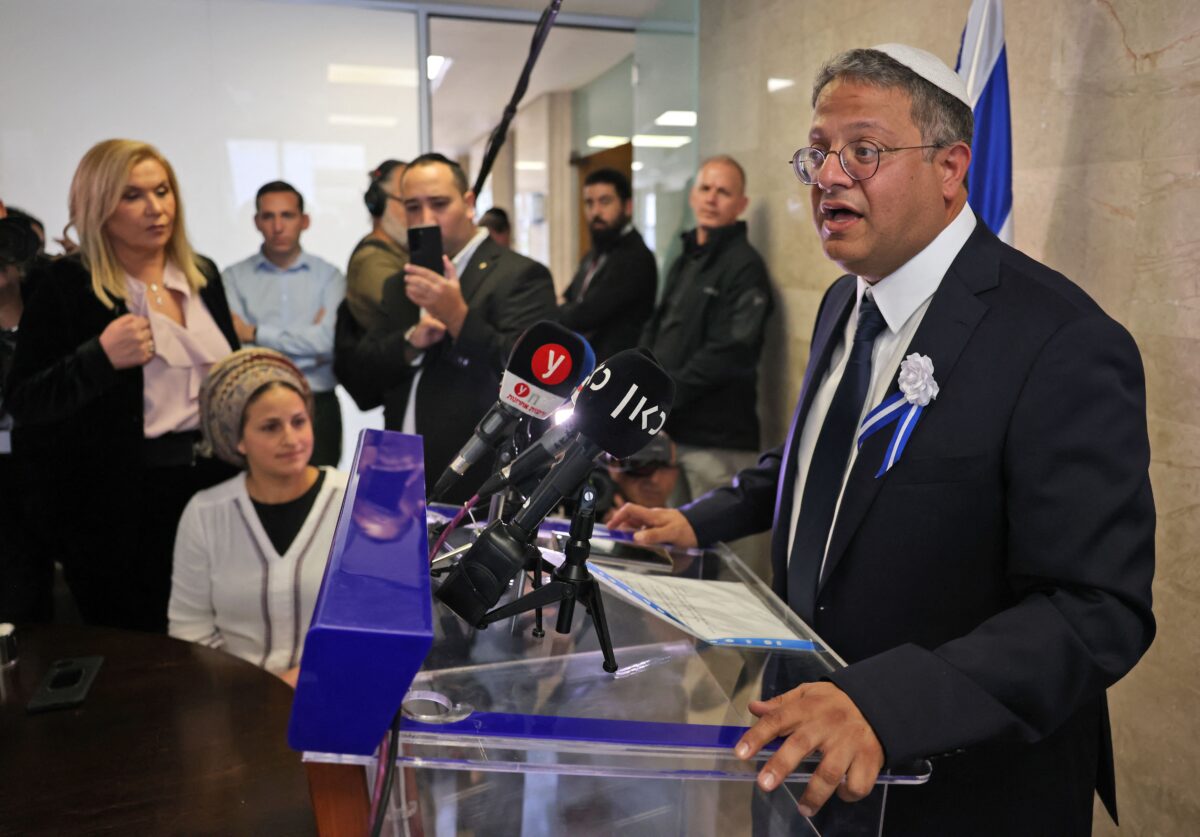 Israeli MP Itamar Ben-Gvir delivers a speech next to his wife Ayala (bottom L) at the Knesset (Israeli parliament) in Jerusalem, on November 15, 2022, before a swearing in ceremony for new members of parliament.

Israeli politicians Avi Maoz, Bezalel Smotrich and Itamar Ben-Gvir ran together on an election campaign platform of restoring the country’s Jewish identity. Now, with signed agreements between two of the three men and Prime Minister-designate Benjamin Netanyahu’s Likud party, a concerted effort to impose their brand of anti-pluralistic Orthodox Judaism on society, appears closer than ever.

While the trio’s ‘return to Jewish values’ message resonated with a large segment of the Israeli public – the Nov. 1 vote made the Religious Zionism, their united party list, the third largest political faction in the Knesset and a critical cog in Netanyahu’s return to power – their focus on rebranding Israeli society could very well test the Jewish state’s already fragile relationship with more liberal Diaspora Jewish communities — even if that is not their intent.

“Their goal is not to enrage Diaspora Jews, they’re looking mostly at Israel,” Shmuel Rosner, a senior fellow at the Jewish People Policy Institute, told Jewish Insider. “They want Israel to be a Jewish state and their understanding of a Jewish state is a state in which the Orthodox interpretation of Jewishness is the main character.”

“It’s not as if they want all Jews in Israel to become observant – well, they do want that, but they are not striving to make all of us more religious or more observant – they want both observant and non-observant Jews to accept Orthodox Judaism as the legitimate interpretation of Jewishness,” he continued. “That is why staunchly religious Reform Judaism is more of a threat than a secular Orthodox interpretation.”

While the moves are seen by the growing coalition, which will likely include two Haredi parties that for years have pushed back against other Jewish denominations, as well as some of the more conservative members of Netanyahu’s Likud party, as a purely internal Israeli matter – a way to revive and preserve Israel’s Jewish character – some of the demands include changing key legislation that by default could have a significant impact practically and philosophically on Jews living outside of Israel.

The most prominent of these demands include calls to both revoke the “grandparent clause” in the Law of Return, Israel’s central immigration legislation that for decades has allowed individuals with at least one Jewish grandparent to make aliya, and a revoking of recognition of Reform and Conservative conversions for the purposes of citizenship.

Requests by JI to the Religious Zionism party, including representatives of Smotrich and Ben-Gvir (who has been appointed national security minister in the next government), to explain their motives behind pushing the changes, which could impact millions of Jews worldwide, were declined.

“This is about the question of who is a Jew,” Israel Cohen, a commentator on the Haredi radio station Kol Barama, told JI. “The Orthodox go according to halacha (Jewish law) and according to halacha, a Jew is someone whose mother is Jewish. What has happened here is that the definition was expanded to include the grandchild of a Jew, but under halacha they are not considered Jewish.”

Cohen said there was some recognition of those who are not halachically Jewish but who identify as Jews or feel close to their Judaism, but some immigrants to Israel, he said, “have taken advantage of that clause to enter the country for other reasons, like those from Russia, Ukraine or other places in Eastern Europe, where living conditions are not good.”

But Alon Pinkas, Israel’s former consul general in New York, who recently wrote on the issue for Haaretz, told JI that such a change would not only affect Israel’s immigration laws, it will also have “political implications” for American Jewry and the relationship with Israel.

“Take the demographics, for example, we assume that there are slightly more than six million Jews in the U.S., but the question now will be how do we count them?” he explained. “Their [Religious Zionism] approach is according to halacha, it has nothing to do with the real world and yet, you know, all of a sudden someone comes up and says, ‘You know that now, according to Israel, there are no more than three and a half million Jews in America.’ That’s a major change.”

He said the approach of these incoming Israeli leaders continues a trend initiated and perpetuated by Netanyahu during his previous term as prime minister.

“He doesn’t like American Jews, I mean, 75% of American Jews. He’s a Republican senator from West Jerusalem, on the right wing of the Republican Party,” said Pinkas, alleging that Netanyahu “consciously and deliberately” ruined the bipartisanship relationship with American politicians.

“He is not an idiot, he knows exactly what he’s doing, but what he does not understand is the process that he has set in motion has basically led to a growing alienation and now he has this government…the alienation is going to be even harder to validate,” he said.

While it is still unclear if Netanyahu will allow such proposals as changing the Law of Return, which is one of Israel’s basic laws, to be enacted on his watch, that such an issue is now being discussed underscores the degree to which Israeli and some branches of Diaspora Jewry have become polarized.

Rosner, who co-authored #IsraeliJudaism: Portrait of a Cultural Revolution, said, however, he did not think the two communities were heading for a total breakdown anytime soon.