The poet, community leader and startup founder steps into a new role as managing partner at Collide Capital 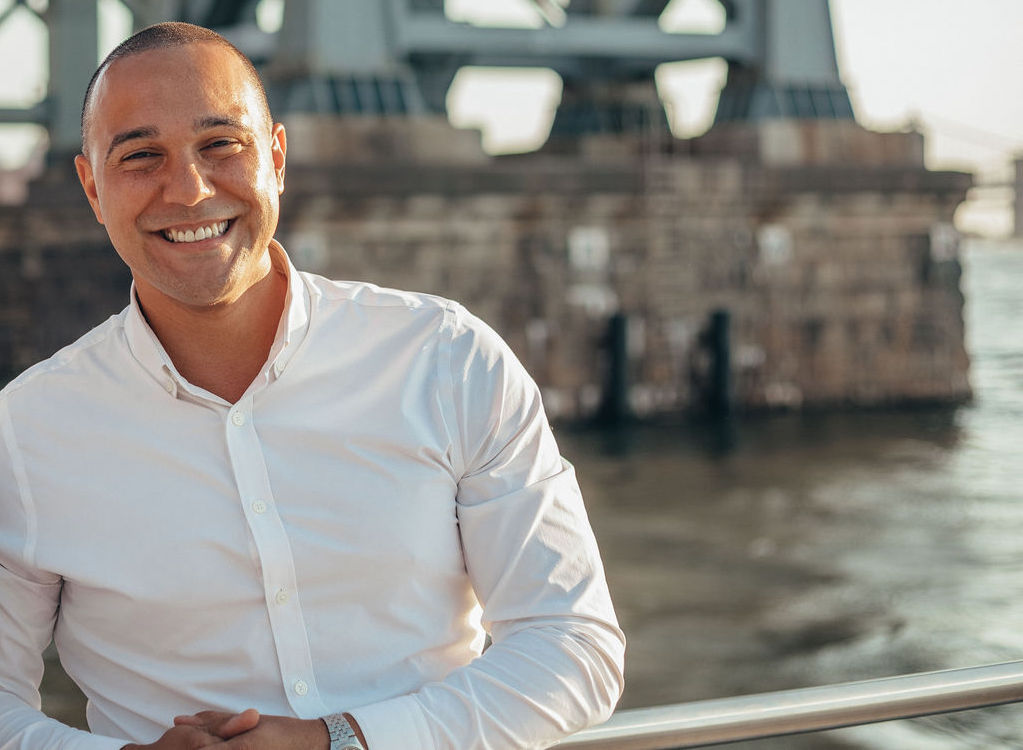 When venture capital firm Collide Capital launched last month with the announcement of a $66 million fund, its managing partners could’ve pointed to any number of business successes between the two of them when explaining why they decided to get into the VC world: Harvard and Stanford MBAs, stints at Bain and Goldman Sachs and founding and leading a media company.

But for Aaron Samuels, the real answer to where he started his career is not in the pages of an economics textbook or a business school case study. It’s poetry — and, in particular, his writings about his experience as a Black Jew. He has experimented with the art form for the better part of two decades, leading to two books (and a third on the way), and performances in venues such as New York’s Lincoln Center.

“I oftentimes wonder what 13-year-old Aaron would think about 33-year-old Aaron, and it’s funny, you see the threads early on in childhood, for what you’ll become, but you don’t always make sense of it until it’s happening in the moment,” Samuels told Jewish Insider in a recent Zoom interview from his Los Angeles home.

“I think from a young age, community was always the most important thing to me, and it was specifically the communities that I came from, which was the Black community, the Jewish community and specifically the Jews of color community,” Samuels continued. “So if you asked me at age 13, ‘Aaron, would you be working on something that involved the empowerment of communities you care about?’ I would have said, ‘Absolutely,’ whether it’s through using creativity, through using art or through using the tools of business or the tools of capital.”

Community-building has been at the heart of Samuels’ career. He is best known for co-founding Blavity, a media company geared toward Black millennials, and AfroTech, a networking platform and conference for Black entrepreneurs and tech workers. (This year’s conference, which took place earlier this month in Austin, Texas, drew more than 25,000 attendees.) His co-managing partner at Collide, Brian Hollins, had more VC experience, and joined Collide after making several seed investments in startups.

At gatherings like AfroTech, Black founders kept approaching Samuels with the same question. “They often say, ‘Thank you for the panel discussion,’ or ‘Thank you for the resources, thank you for the mentorship, but there’s really just one thing that we need. We need you to cut the check, and we need the capital,’” Samuels recalled. “That was a big part that was missing from the equation.”

Startups run by women and people of color tend to have a significantly more difficult experience raising capital. In 2021, just 1.3% of all venture and growth equity financing went to Black-founded startups, according to Crunchbase. Women-led startups received just 2.3% of VC funding in 2020, Crunchbase reported. Collide hopes to help start changing these figures.

Unusual for a new and unestablished fund, Collide’s $66 million fund has the backing of several major institutional investors. It is anchored by the University of California’s endowment, and it also received significant investments from Amazon, Alphabet and Twitter. Other limited partners in the fund include Bank of America, Citi and Northwestern Mutual.

Collide is not an impact fund, meaning it is not investing only in startups with particular social-minded goals. But it does intend to focus on startups led by women and people of color. The types of companies that Collide plans to support include enterprise software-as-a-service (SaaS), supply chain infrastructure and consumer technology geared toward the Gen Z set. (“When Gen Z comes into dominance, what is the Slack of 2030?” Samuels asked.)

Samuels sees a throughline from his childhood, growing up in what he described as a “queer, multiracial, multiethnic havurah group” in Providence, R.I., to the work he does now in the business world.

“If you asked me, would I be a venture capitalist? I would have told you I have no idea what a venture capitalist is, and it was definitely a windy path to get here, through the poetry world and then through consulting and through product and through being a founder,” he said. ​​“But it’s no surprise that I’m now still working on projects for the empowerment of underserved and underrepresented communities.”

As he has navigated the business world, Samuels has always remained close to the Jewish community. Samuels created and lived in the first-ever Moishe House for Jews of color, in L.A., and he sits on the board of the Jewish progressive advocacy group Bend the Arc. In 2016, at the group’s first major national conference, Samuels did a poetry reading on the main stage.

“It really resonated with folks. He shared insights through his poetry into his identity and experience as a Black Jewish person,” said Jamie Beran, Bend the Arc’s CEO. “He’s really influenced the national conversation about how to be a more racially just and inclusive Jewish community.”

In 2020, Samuels co-wrote an open letter to Jewish organizations, urging them to work to fight racism in Jewish communities by investing in community leaders of color and committing to racial justice initiatives. The letter, which was signed by thousands of individuals and dozens of synagogues, independent minyans and other Jewish groups around the country, kicked off the “Not Free to Desist Campaign,” an ongoing project calling for change within Jewish communities.

“I think a lot of people expect results overnight. But it’s a long — it takes years. It’s a lifetime of work,” said Rachel Sumekh, who led the open letter with Samuels and founded the nonprofit Swipe Out Hunger. “I think that the conversation was started in a way that we are moving beyond just having committees, where we’re saying, What are the actions we’re taking? What are the commitments we’re making? I see the conversation moving forward.”

Samuels collaborated with Reboot and Hillel International to produce a reading of his 2021 poem “Forgiveness,” about experiencing Yom Kippur, and the elaborate security common at many American Jewish synagogues, as a Black Jew. The short film toggles between brief recordings of Black Jews of all ages as they showcase their Jewish identity, with Star of David necklaces, yarmulkes or prayer shawls, as Samuels recites his poem.

“I walk, covered in white, to the temple steps. I walk past four police officers. I see their weapons. How they make the community feel safe. I ready my body to pray,” Samuels says, his voice strong and solemn, warm and inviting. “I walk through the metal detector, and I am buying candy in a new neighborhood. I exit the metal detector and I am asleep in my own bed. This is my place of worship. These are my people.”

Writing gave Samuels an outlet to vent his anger as a kid — both his parents are clinical psychologists — about racism, sexism and homophobia. Today, he stills writes, although anger is no longer the only emotion he is dealing with. “It allows me to, in some ways, have an external hard drive for my feelings,” he explained, although it’s hard to imagine when Samuels has the time. (Sumekh, who also lives in Los Angeles, pointed out that every time she goes to the beach with Samuels, he brings his laptop.)

Besides, it’s not like he’s a starving artist anymore. But earning a living was never what drove Samuels to write.

“Poetry is a medium that opens us up to interpretation and opens us up to be playful, and so to have a poet in the VC and the entrepreneurial tech space is a gift because he’s bringing the way he thinks as a poet into that space,” said Caroline Rothstein, a poet who has worked closely with, and performed with, Samuels.

“In some ways, I think that the entrepreneurial journey and the artistic journey have a lot of overlaps,” Samuels noted, “in that both artists and entrepreneurs see their job, in many ways, as to look at the world, and then ask themselves how they can slightly bend it to make it a little bit different, and hopefully better, or at least more interesting.”