The last Israeli ambassador to have an audience with the queen

The former envoy to the U.K. shared with the queen how the Royal Air Force helped his family survive the Holocaust 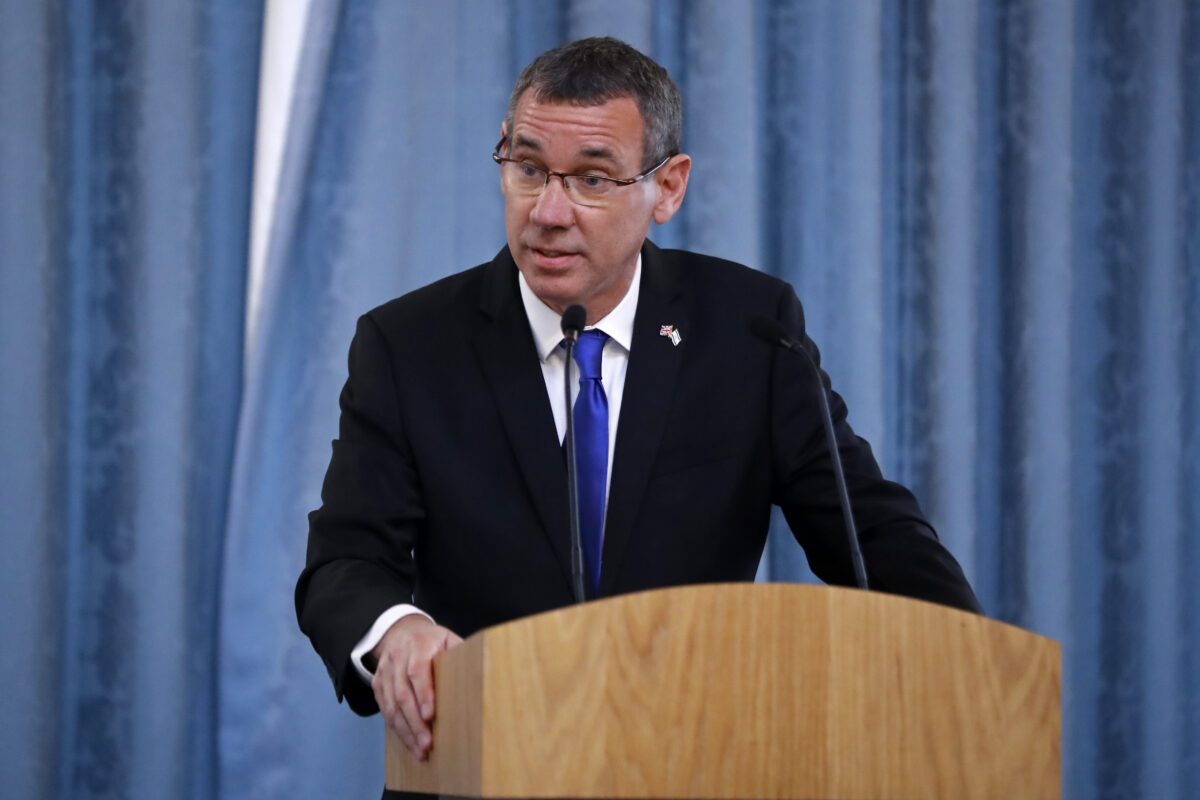 Israeli Ambassador to the United Kingdom Mark Regev speaks during the annual Holocaust Memorial Commemoration event, co-hosted with the Israeli Embassy, at the Foreign & Commonwealth Office on January 23, 2019, in London, United Kingdom.

New diplomats arriving to the United Kingdom are required to present their credentials to the reigning monarch. Mark Regev, the last Israeli envoy to present his credentials in person to Queen Elizabeth II, who died last Thursday at 96 after a 70-year reign and whose funeral is today, felt pressure to make the most of his short time with her.

“I needed to decide what I wanted to talk to her about,” recalled Regev, who headed Israel’s embassy in London from June 2016 through 2020. When his replacement, Tzipi Hotovely assumed the role, she presented her credentials remotely due to the COVID-19 pandemic.

“I called then-Prime Minister and Foreign Minister [Benjamin] Netanyahu and asked him if he had a message for the queen. He sent me something very complimentary about the way she conducts herself as the queen and about what she has done for the United Kingdom, but I still had a few minutes to fill.”

Regev decided that he would relay to the queen the story of his late father, a Jewish citizen of Germany during World War II.

“The whole family was going through a very difficult time, they were in a very precarious situation as Jews in Germany,” Regev relayed to Jewish Insider. “Then one night, the RAF Bomber Command flies over and bombs the place where they’re living to kingdom come and in the fire and death, chaos and confusion, the family managed to escape — they literally ripped off their Jewish stars, and went into hiding.”

During his audience with the queen, Regev, whose family later emigrated to Australia, emphasized how British soldiers, who have in the past been criticized for bombing civilian populations in Nazi-occupied Europe, had saved them during the war. While the queen responded as the consummate professional, Regev said, later that evening the foreign office official who had accompanied the royal matriarch during the credentialing’s ceremony told him that she was in fact quite moved by his personal tale.

“Who knows if he was just being nice to me,” quipped Regev. “But maybe she did actually appreciate hearing the Regev family story.”

“I was always very impressed with the queen and thought she was the consummate professional,” Regev told JI in an interview last week. “Obviously, when I met her, she was already in [her] 90s and I would see her at events like the Christmas party every year, where there would be a big line of like 150 ambassadors, each with their partners, and she would shake everyone’s hand, say a nice word and move on. That’s hard work!”

“She took her role very, very seriously,” he continued. “I had real respect for the way she conducted herself, and I think everyone who saw her or met her was impressed with her ability to do the job.”

During his four years as ambassador, the former envoy, who served for years as Netanyahu’s foreign press spokesman and who now heads the Abba Eban Institute for International Diplomacy at Reichman University in Herzliya, said he learned “how much the British people appreciated the queen and her role – there is no doubt that the royal family is a big part of British identity.”

The monarchy is also a big part of British Jewish identity, Regev continued, pointing out that British Jews say a special prayer for the queen and the royal family every Shabbat but adding that it is above and beyond the prayer.

He also said the British-Israel ties were solid and strengthening, especially with the installation of new U.K. Prime Minister Liz Truss.

“As ambassador, your role is to advance the bilateral relationship between Israel and the country where you’re posted,” Regev explained. “Ultimately, the trajectory of British-Israel relations has been very good over the last years; we’ve been constantly moving in the right direction.”

“By the time I left the U.K., Truss was already foreign secretary, and she was the best foreign secretary for Israel there has ever been,” he continued, adding, “whenever I met her at events she always expressed herself as a friend of Israel.”

As for his new position at the Abba Eban Institute for International Diplomacy, Regev, who replaced Israel’s new ambassador to Germany, Ron Prosor, said that his vision is to “enhance Israel’s soft-power reach and train the next generation of Israeli spokespeople.”

Israel has excelled in some industries, said Regev, citing defense, strategy and intelligence issues but, he added, “Where Israel needs room for improvement is in soft power. Just like Britain had the queen, Israel has soft-power assets too and needs to use them.”