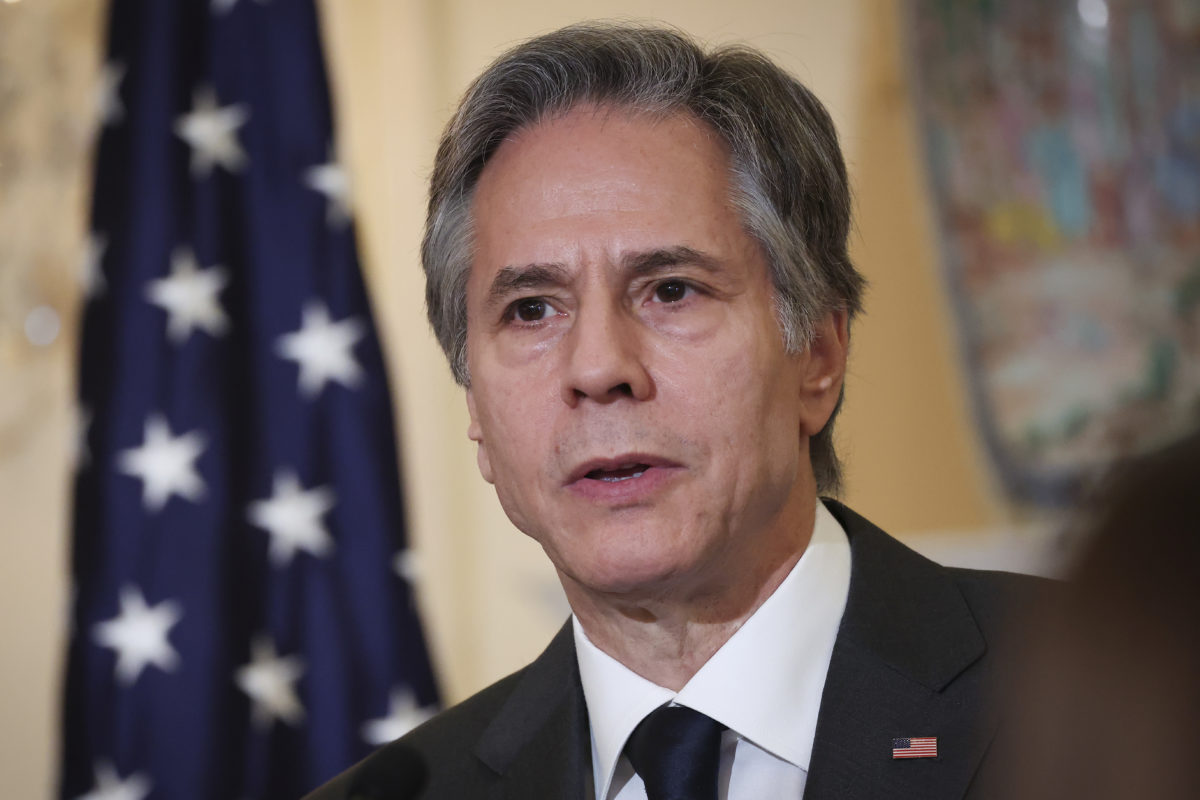 Secretary of State Antony Blinken speaks during an event at the State Department on June 2, 2022, in Washington, D.C.

Secretary of State Tony Blinken and Israeli Foreign Minister Yair Lapid discussed Israel’s warming ties with the Arab world, rising antisemitism and the threat posed by a nuclear Iran in remarks on Monday at the American Jewish Committee’s annual Global Forum in Manhattan.

In prerecorded video messages at the conference, held at Congregation Emanu-El of the City of New York, Blinken focused on “the alarming rise of antisemitism around the world” and on the United States’ commitment to maintaining Israel’s security, while Lapid discussed the Abraham Accords, Iran and the democratic values that link Israel with a wartorn Ukraine.

Blinken pointed to the historical connection between antisemitism and hatred of other groups. “Where antisemitism and Holocaust-denial spread, repression and democratic backsliding are, often, not far behind,” he said.

The secretary of state reiterated the Biden administration’s commitment to combating hatred worldwide, preventing Iran from acquiring or developing a nuclear weapon and expanding normalization with Arab states. He added, “Across these efforts, we’re working to forge tangible improvements in the lives of Palestinians.”

Lapid discussed the common experience of Israelis and Ukrainians in resisting the violence of international aggressors to maintain their respective democracies. Recently, Lapid has issued a strident condemnation of Russian actions, as the Israeli government has aided Ukraine while attempting to avoid aggravating Russia.

“This past year has reminded us that the biggest struggle in our world is not complicated,” he said. “It is simple: There is a struggle between good and evil, between terror and violence on one side, and freedom and democracy on the other.”

Lapid praised what he described as Israeli “liberal values,” which he said persist despite perpetual conflict in the region.

“They never caused us to give up on freedom of expression, the rule of law, our democracy or on liberal values of freedom of religion and defending minority rights,” Lapid said.

Referencing the one-year anniversary of Israel’s governing coalition — whose future remains tenuous after Knesset member Nir Orbach, a member of Israeli Prime Minister Naftali Bennett’s Yamina party, quit the bloc on Monday, placing the ruling coalition into the minority — Lapid said, “This is not just the government, but an exciting political experiment, which says we believe that even people who do not agree can work together for the common good.”

The plenary also included a panel of U.N. ambassadors from Israel, the United Arab Emirates, Bahrain and Morocco, who spoke about the 2020 Abraham Accords and ties between their countries.

During the panel, Israeli Ambassador to the U.N. Gilad Erdan criticized the International Atomic Energy Agency, the U.N.’s nuclear watchdog, for condemning Iran’s nuclear activities but stopping short of taking the country to the U.N. Security Council to trigger snapback sanctions.

Erdan also voiced hope about the possibility of Israel and Saudi Arabia normalizing relations, as President Joe Biden prepares to visit the region, saying he is “praying and wishing that [Biden’s] stop in Saudi Arabia would help to expand the new circle of peace.”