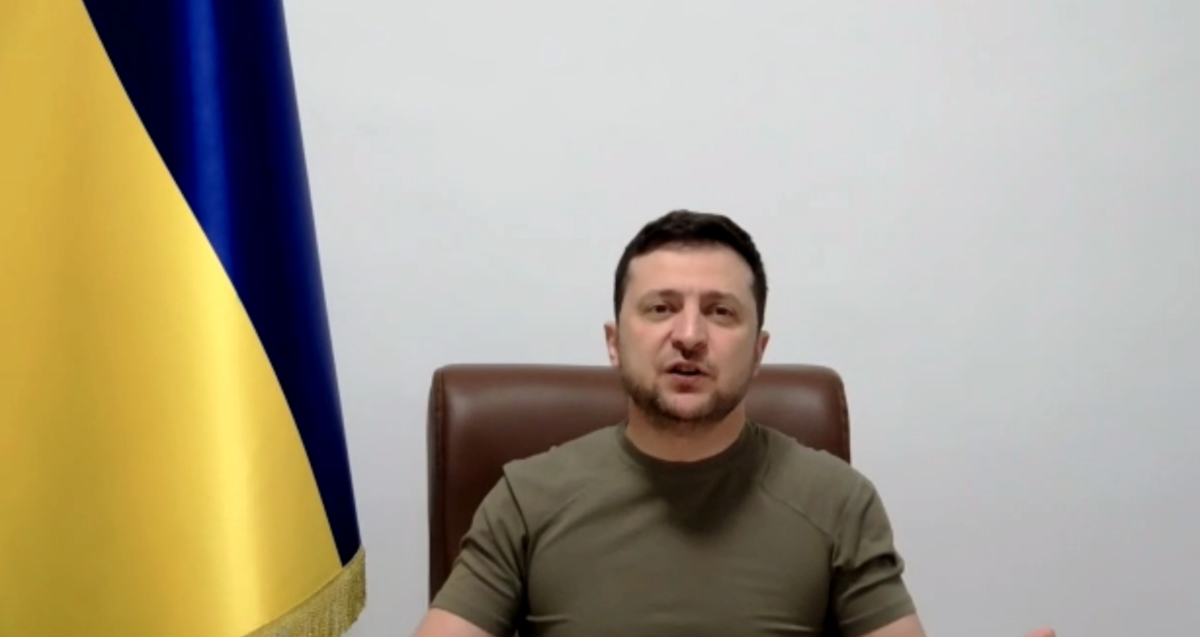 Zelensky addressed members of the Conference of Presidents of Major American Jewish Organizations over Zoom. Dressed in the green t-shirt that has become his uniform since Russia began its invasion last month and sitting next to a Ukrainian flag, Zelensky, who is Jewish, drew comparisons between Moscow and the Nazi regime, noting the indiscriminate killing of civilians.

“All of this already happened in Europe,” he said, speaking through Zoom’s translation function. “All of this happened during Nazi times. This all happened [when] the German army rolled through Europe, and everyone gave their Jewish people away, putting them into ghettos… They’re taking the city, that’s what’s happening. They see an ordinary city, they block all the roads… and don’t let people out. They don’t let people out from those towns and cities, even those who simply want to leave or run away, they don’t let them out. They don’t allow us to bring food in. They don’t allow us to bring the water in. They disconnect the internet, the TV, electricity. This is Nazi behavior. This is Nazism. This is just ordinary Nazism. This is no different from the Warsaw, the Polish ghettos.”

“I keep telling this for the world to wake up,” he said. “The question of the survival of the Ukrainian nation — the question will be the same as antisemitism. It’s going to be exactly the same. All of these millions of people are going to be exterminated. And this is a big tragedy.”

He added that Russian troops have lobbed hundreds of missiles into Ukrainian territory. “There’s not any secret in who’s sending those missiles,” Zelensky said. “There’s no secret in who is bombing from these planes. They are bombing the life out of everything [that] is moving, they want to take away rights and freedoms just by showing, demonstrating, by humiliating that if Russia wants something they will achieve it.”

Zelensky compared the ongoing attacks on Ukrainian cities to the Sept. 11 attacks. “I was looking at what was happening with the American people. And it was as painful to me, it was hurting, because I thought, ‘If America is not protected, if terrorists can just say and kill people then what can you talk about Ukraine and my motherland?’ And I understand that this is a common goal, to protect our rights and freedoms. If the Twin Towers are falling down in the United States, it can happen in Ukraine as well.”

“Just support us,” he said. “There needs to be pressure to make sure the bombardment would stop. Close the sky. We don’t have our own fighter jets to close the sky.”

“Please don’t let our country to be exterminated,” Zelensky said before signing off. “They deserve to live.”