God, faith and support for Israel at Chabad breakfast on Capitol Hill

‘A lot of people think this country’s about separating church or religion from government. I say no,’ Sen. Cory Booker remarked 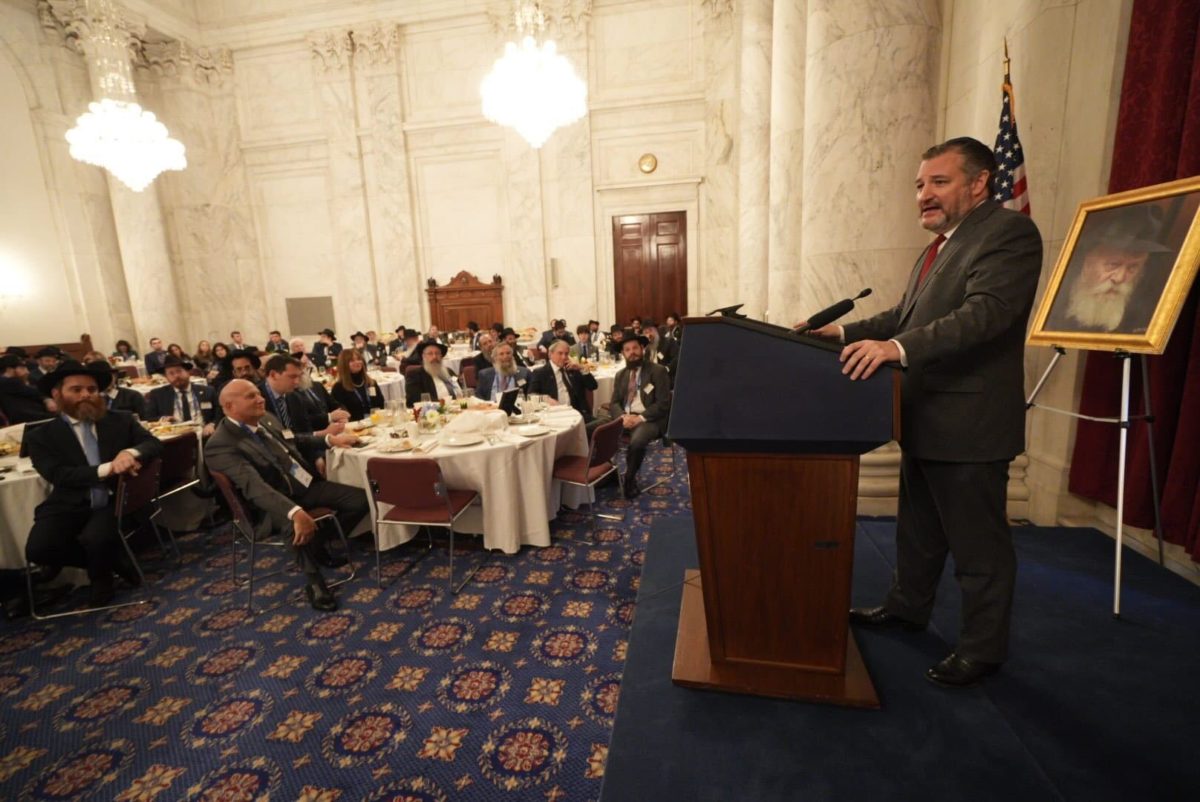 A parade of lawmakers sounded off on issues from the separation of church and state to the Iran deal at a Chabad breakfast event on Wednesday on Capitol Hill.

In his remarks, Booker argued for a role for religion in governance.

“A lot of people think this country’s about separating church or religion from government. I say no,” Booker remarked. “I say this is a time more than ever that we need our faithfulness. We need to understand that God has a calling for us. And if we do that I promise you we will heal. We will have a better day not just for America but for the whole world.”

Booker, who described himself as an “unofficial shaliach to the goyim,” said he studies Torah “every Friday morning” and is “in love with” it.

“It has made me a better person,” Booker said. “Unlike the other two Abrahamic faiths, [Judaism] is not trying to convert me. What it’s really trying to do is heal the world.” He added, “I am here today because Jewish Americans [in the civil rights era] saw the injustice and could not sit still and joined the cause.”

Schumer discussed his own family history — his grandfather was a well-known rabbi, and many of his relatives were killed in the Holocaust.

“When people ask me why I’m for the State of Israel… I say, ‘I’d have a lot more uncles, aunts, cousins, nieces and nephews if there was a State of Israel back then,” he said. He also touted recent legislative accomplishments, including the passage of funding for Israel’s Iron Dome missile-defense system and legislation bolstering the Abraham Accords, and said that he pushed to eliminate family size limits on the Child Tax Credit in response to concerns from a New York rabbi.

Cruz, whose state was the location of the Congregation Beth Israel hostage standoff earlier this year, decried the antisemitic ideas espoused by the hostage-taker.

“It says something about the perniciousness of antisemitic lies that he believed the first synagogue he encountered was responsible and had the ability to control what’s happening,” he said, referring to the attacker’s demand that the synagogue help facilitate the release of an imprisoned convicted terrorist.

Klobuchar praised Secretary of State Tony Blinken’s participation earlier this week in the “Negev Summit,” which she called a “historic meeting,” adding that the recent terrorist attacks in Israel are an example of “why so many of our colleagues and myself that are here [have] strong support for Iron Dome and strong support for American aid.”

She also touted the passage of a bill she championed to help nonprofits upgrade their energy infrastructure as part of the bipartisan infrastructure package last year.

Sullivan urged the audience to speak up about the Iranian threat with a new Iran nuclear deal potentially on the horizon.

“Moving into another [deal]… I think it would be a disaster. Your voice is going to need to be strong and loud and clear on this,” he said. “But we need to support Israel, especially during these troubling times. And we don’t need to be empowering the world’s largest state sponsor of terrorism.”

Tenney spoke at length about Schneerson.

“I think Rabbi Schneerson’s legacy is going to be a guiding tool for us,” she said. “So now more than ever I think it’s important that Americans of faith — all faiths — can benefit and also come together from Rabbi Schneerson’s great mission for us and make the world a better place of course.”

Zeldin encouraged all members of Congress to visit Crown Heights, the Brooklyn neighborhood that is the headquarters of the Chabad-Lubavitch movement, and the Rebbe’s burial site in Queens.

“Every member of Congress passes through New York City. It’s not that hard to go visit this amazing, everlasting site for wisdom and guidance in our lives and our purpose here in Washington, D.C.,” Zeldin said.

Johnson praised Rabbi Mendel Alperowitz, who relocated to South Dakota in 2017 to become the first full-time rabbi in the state in decades and set up a Chabad in the only U.S. state at the time without one.

Throughout the event, lawmakers emphasized their support for Israel, the Nonprofit Security Grant Program that protects Jewish institutions in the United States, and the Jewish community in Ukraine. The chief rabbi of Kyiv was in the audience at the breakfast.

“I am asked from time to time how much are you going to give to Ukraine,” Hoyer said, addressing the rabbi during his remarks. “Rabbi, I tell them, ‘All you need.’”

Cawthorn was perhaps a surprising invite for Chabad, given that has said that he has attempted to convert Jews to Christianity and appeared to speak positively about Adolf Hitler during a visit to the Nazi leader’s mountain retreat.

“It is my honor to be among you today, it is my honor to get to learn about the Lubavitcher Rebbe,” Cawthorn said during his remarks, also referencing the story of Queen Esther. “The Jewish community has faced so much persecution throughout all history here in America, in the nation of Israel, all across the world… I realize that it is the duty of America to help provide assistance and protection to the nation of Israel because I truly believe that you are the chosen people of God.”