The organizations aim to promote dialogue between young Muslim, Jewish and Christian leaders from the region that will strengthen Abraham Accords. 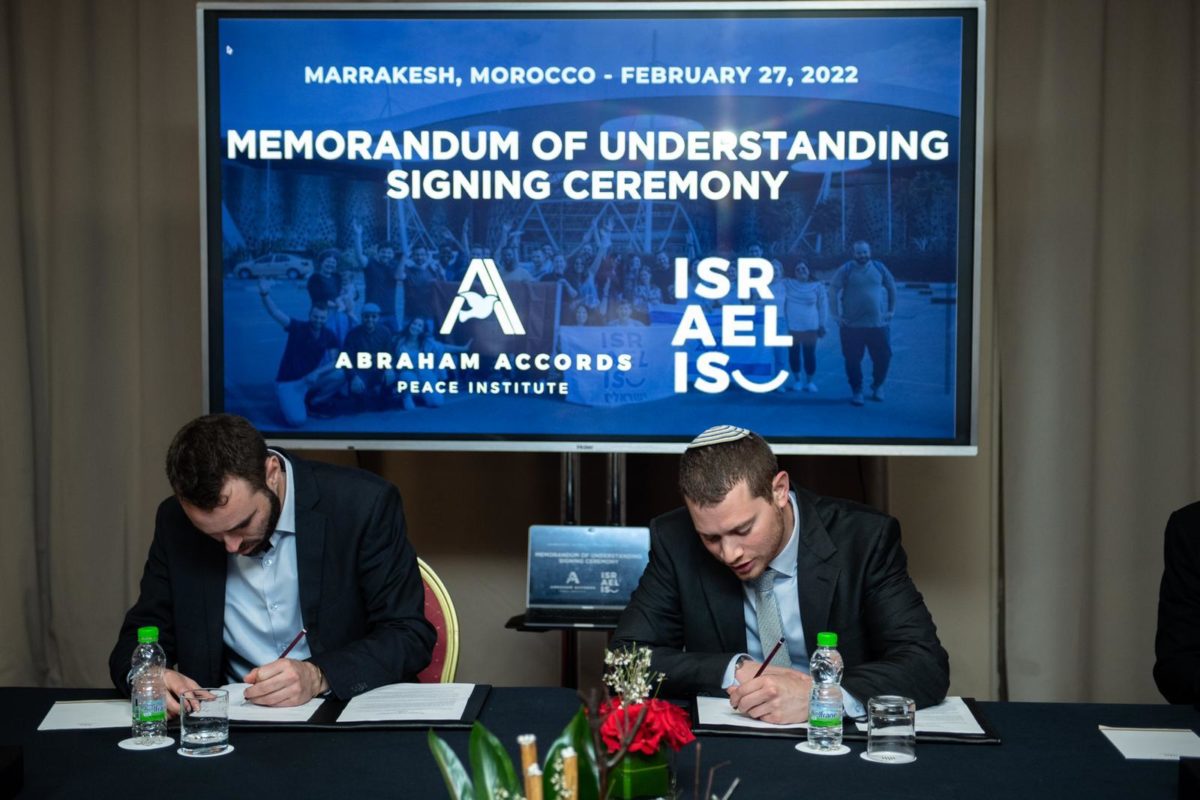 Asher Fredman (right), Israel director of AAPI, and Eyal Biram, co-founder and CEO of ISRAEL-is signed a memorandum of understanding in Marrakesh, Morocco, on Sunday.

Seeking to spur dialogue between young Muslim, Jewish and Christian leaders in the Middle East and build on the emerging ties forged by the recent Abraham Accords, the Washington-based Abraham Accords Peace Institute (AAPI) signed a memorandum of understanding with the Tel Aviv-based NGO ISRAEL-is during a special ceremony last weekend in Marrakesh, Morocco.

Taking place on the sidelines of the Leaders of Tomorrow Summit, a forum that brought together young Israeli and Moroccan leaders, the two organizations said the new arrangement would bolster such interactions and help the parties develop sustainable innovation projects, build additional cultural exchanges and promote influencer delegations between Israel and Morocco, as well as other Arab countries —  primarily the United Arab Emirates and Bahrain.

The UAE and Bahrain signed the Abraham Accords with Israel on Sept. 15, 2020, with Morocco normalizing ties with the Jewish state a few months later. Since then, diplomatic and economic relations have grown steadily.

Asher Fredman, Israel director of AAPI, a nonpartisan, nonprofit organization dedicated to supporting the implementation and expansion of the Abraham Accords, who was present at the weekend seminar, told Jewish Insider that the new cooperation would serve to “strengthen culture, tourism and people-to-people ties.”

“It is an investment in the next generation of leaders in all the countries,” he said, adding that the ultimate goal was to “expand the circle of the Abraham Accords” by showing how peace can create shared opportunities and strengthen societies for the future.

Eyal Biram, co-founder and CEO of ISRAEL-is, which educates and trains young Israelis to conduct meaningful encounters with their international peers, said the cooperation with AAPI was “deeply important.”

“The seeds of this effort were planted by the United States government,” he said. “Every development could not have happened without the support of the U.S., and we are looking forward to creating more wonderful opportunities and building a shared future.”

The two organizations said they will work together to bring regional delegations to Israel to meet with both Jews and Arabs in diverse fields such as politics, business and culture, and to bring Israeli young leaders and prominent figures to the Arab world.

“The key to ensuring that the Abraham Accords continue to flourish for generations is through deepening people-to-people cooperation,” AAPI’s president and executive director, Robert Greenway, said in a statement.

“The decades of political disconnect between Israel and the countries of the Middle East have led too often to misunderstandings, hostility and conflict,” he said. “By working with ISRAEL-is on bringing together young leaders from across the region, we can ensure that the Abraham Accords are not just agreements on paper, but an ongoing paradigm for peace, cooperation and prosperity.”

The Leaders of Tomorrow Summit included some 60 people from Israel and Morocco. Participants engaged in a two-day hackathon to brainstorm ideas and initiatives that could be developed between the two countries.

This story is part of a series on the emerging relationship between Israel-Moroccan following the signing of the normalization agreement in October 2020. Eglash was a guest of ISRAEL-is at the Leaders of Tomorrow Summit in Marrakesh.