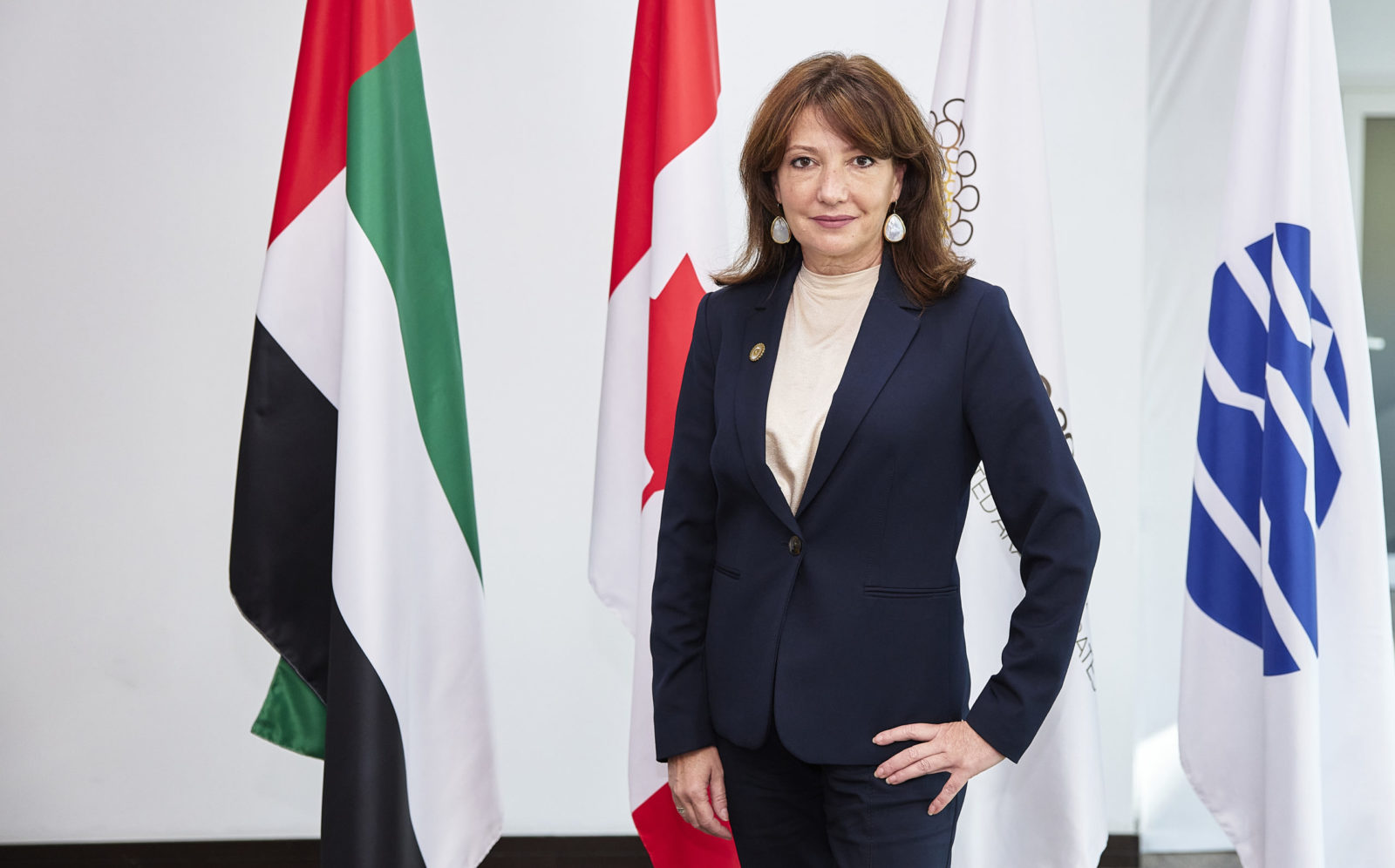 When Marcy Grossman celebrated Hanukkah in the United Arab Emirates last year, it was a subdued, underground affair.

“It was basically like 75 people in a residence, we lit candles, ate latkes, that was it,” said Grossman, who has served as Canada’s ambassador to the UAE since October 2019. The gathering was held in what was known as “the villa,” Dubai’s secret, unmarked synagogue. But this year, just a few months after the signing of the Abraham Accords codifying peace between Israel and the UAE, the celebrations reached another dimension.

“It’s a different world,” Grossman told Jewish Insider in a video interview from Abu Dhabi on the seventh night of Hanukkah. “I was in Dubai last week for the start of Hanukkah… there were three major Hanukkah celebrations to choose from, there was a 12-foot menorah put up in front of Burj Khalifa, the tallest building in the world, there was ‘Sevivon’ [the dreidel song] being sung in the streets, there were kippot, there was kosher food — it’s just unbelievable, really,” she added. “And it just keeps growing.”

Grossman, a career officer with the Canadian Foreign Service, first arrived in the UAE in 2018, as Canada’s consul general to Dubai. A native of Montreal, Grossman received bachelor’s and master’s degrees in psychology from Carleton University in Ottawa. She got her start in public service in the Correctional Service of Canada before joining the Department of Foreign Affairs and International Trade in 2001. Since then, Grossman has served in a series of diplomatic postings in the United States including Dallas, Miami, Los Angeles and Denver.

After close to 20 years in the U.S., Grossman was ready for a change — and grateful when one came her way.

“Dubai was really calling to me, I don’t know why,” she told JI. “I was really thrilled when I got matched to Dubai. I like to say that Dubai picked me.”

With two decades of foreign postings under her belt, Grossman speaks with the smooth, practiced cadence of a longtime diplomat. But she also exudes a warmth and intimacy — as well as an evident passion and ambition for her life’s work. Her lively Twitter feed, meanwhile, showcases her activities, travels and her well-documented affinity for unicorns.

While her primary role as an ambassador is promoting the bilateral relationship between Canada and the UAE — with a focus on boosting trade ties — both Grossman and Ottawa have additional goals on their agenda.

“Canada actually has a platform on feminist foreign policy, looking at all aspects of trade, development, foreign policy through a gender lens,” Grossman said. “And that is something that is really important to my platform here.” Canada, she pointed out, has reached gender parity in its foreign service, noting that the current Canadian ambassadors to Lebanon, Jordan and Morocco are all female.

And she was prepared for a certain level of culture shock in the Emirates — admitting that her first foreign posting in Dallas provided quite a jolt to her Canadian sensibilities.

Grossman noted that she is in the minority in the UAE as a female ambassador, as around 90% of the envoys posted in Abu Dhabi are male — something she said is fairly in line with worldwide trends. And though she never publicly advertised her Judaism, “my name speaks volumes.” But any reservations she had before arriving were quickly assuaged.

Beth Hirshfeld, president of the Canada-UAE Business Council, told JI that Grossman hit the ground running when she arrived in Dubai two years ago.

“I met H.E. Marcy Grossman on her first day in the UAE when she dropped off her luggage, changed into a ballgown, and, jet-lagged, headed out to a Business Council Gala supporting Canada-UAE trade,” said Hirshfeld. “I think that this sums up Ambassador Grossman very well — energetic, engaged, always willing to help out, and incredibly passionate about building the relationship between Canada and the UAE. This, paired with her down-to-earth, caring and charismatic personality has made her both a pleasure to work with and a wonderful leader.”

Within a few months of arriving in Dubai in 2018, Grossman sought to track down the local Jewish community, which at the time was operating largely under the radar.

“I had heard there was a Jewish community but I did not know anyone in it, and anyone from it, and I had no idea how to find it,” Grossman recalled. After making a few calls, she managed to connect with the organizers of the home-based synagogue and was able to attend gatherings, “but it was still very quiet, and very subdued.”

Things started to change in 2019, she said, which the UAE declared its “Year of Tolerance,” during which issues of “pluralism and religious diversity really came to the forefront.” That was also the year the UAE announced the creation of the “Abrahamic Family House,” a still-in-progress complex in Abu Dhabi slated to eventually house a mosque, synagogue and church.

“As soon as that happened I realized that something really was moving,” she said. And with the announcement of the Abraham Accords a year later, the local Jewish community transformed from secret and underground to public and vocal.

“I can’t even tell you how many Jewish Canadians, Jewish Israeli-Canadians have reached out to me and talked to me about wanting to come here,” Grossman said. “It’s just really incredible. It’s just been nonstop.”

The announcement of the Israel-UAE normalization deal in August, Grossman said, was shocking but not surprising.

“I don’t think there was anybody other than a few people who actually knew what was the best kept secret,” she said. “It was a huge shock to everyone, to everyone in the diplomatic community, to everyone around the world. It was a very, very closely held secret,” she added. “I was surprised at the announcement, but I wasn’t surprised that it happened. I knew that things were moving in that direction.”

Rabbi Yehuda Sarna, a native of Montreal who has served as the non-resident chief rabbi of the UAE since last year, told JI that he has been impressed by Grossman’s commitment to public service.

“Amb. Grossman has always had a unique sense of purpose and mission. She is aware of her unicorn status — Ashkenazi Jewish woman of power in the Arab world — and approaches it with dignity and responsibility,” said Sarna. “Her spirituality, values, and sense of community should make every Jew and every Canadian proud.”

Grossman told JI that she always hoped — but never quite imagined — that she would occupy a front row seat to Middle East peace. “I joined the Foreign Service 20 years ago always with a view in mind of somehow making a contribution to peace in the Middle East,” she said. “I didn’t know how that was going to transpire, I certainly never expected it to happen in the UAE. I feel so blessed and so honored to actually be here at this time.”

The ambassador said she has been blown away by the number of Israelis who have flooded into the Emirates over the past month alone — with some estimates of more than 50,000 tourists. And she believes that once COVID-19 restrictions are eventually lifted that figure will skyrocket.

“I think the next big milestone and the next larger momentum is going to be Expo 2020,” the global exhibition that was originally planned for Dubai this year and delayed due to COVID until October 2021. “We’ll see a lot more people around Expo.”

In the interim, however, Israeli tourism will likely slow down, after Israel’s Health Ministry mandated Dubai switch from a “green destination” to a “red destination” — mandating quarantine for returnees — as of Dec. 26.

But Grossman is optimistic about the many new opportunities that are continually developing.

“It’s just amazing how warm and welcoming the peace has been and how many people have come here,” she said, opening up “some really, really interesting new ways of working,” pointing to a hockey game in Dubai over the weekend between the UAE’s Mighty Camels and Israel’s Bat Yam Chiefs — during which Grossman dropped the ceremonial first puck.

“It’s an opportunity for Canada to not only support sports diplomacy, but also to continue to… move the peace agenda forward any way we can,” she added, “whether it’s economically or by cultural diplomacy or sports diplomacy or initiatives around peace and security. It’s just amazing how these opportunities have presented themselves.”

The past few months, Grossman said, have also opened up a world of new — and old — connections.

Michal Divon, an Israeli journalist based in New York, has visited the UAE multiple times since the Abraham Accords were signed earlier this year. But her family has known Grossman for many years — since Divon’s father, Haim Divon, served as Israel’s ambassador to Canada while Michal was in high school.

“I started a peace camp for Israeli and Palestinian youth back then and Marcy has always been an enormous advocate for peace,” Divon told JI. “When the Abraham Accords were signed Marcy reached out to me and we’ve been in close contact ever since,” she added. “She has been instrumental in helping the Jewish community in Dubai and has a very important role every week — reciting the prayer for the leadership and people of the UAE. It’s very unique.”

And Grossman has also been gaining fans in Israel as ties and initiatives open up.

Knesset Member Michal Cotler-Wunsh, who grew up in Montreal and is the stepdaughter of former Canadian Justice Minister Irwin Cotler, told JI that Grossman embodies the values of “tolerance, coexistence, equality, and peace” and is “committed to furthering them in the region and beyond.”

“Her vision and leadership in engaging and connecting to Judaism and Israel, enabling decision makers to engage with our peers and the Jewish community in the UAE, is the cornerstone of realizing the potential of these historic times,” added Cotler-Wunsh, a lawmaker with Blue and White, “and is important to forging new relationships, women’s empowerment, and cultivating lasting people-to-people peace.”

Grossman, who said her most recent visit to Israel was seven or eight years ago to celebrate her son’s bar mitzvah, is eager to return now that direct flights have opened up.

“Now that direct flights are happening I’m really excited and hoping — as soon as travel opens up — that’s going to be my first trip.”