The sanctions bill targeting ‘transnational oppression’ is named in honor of journalist and activist Masih Alinejad, who was targeted by the Iranian regime 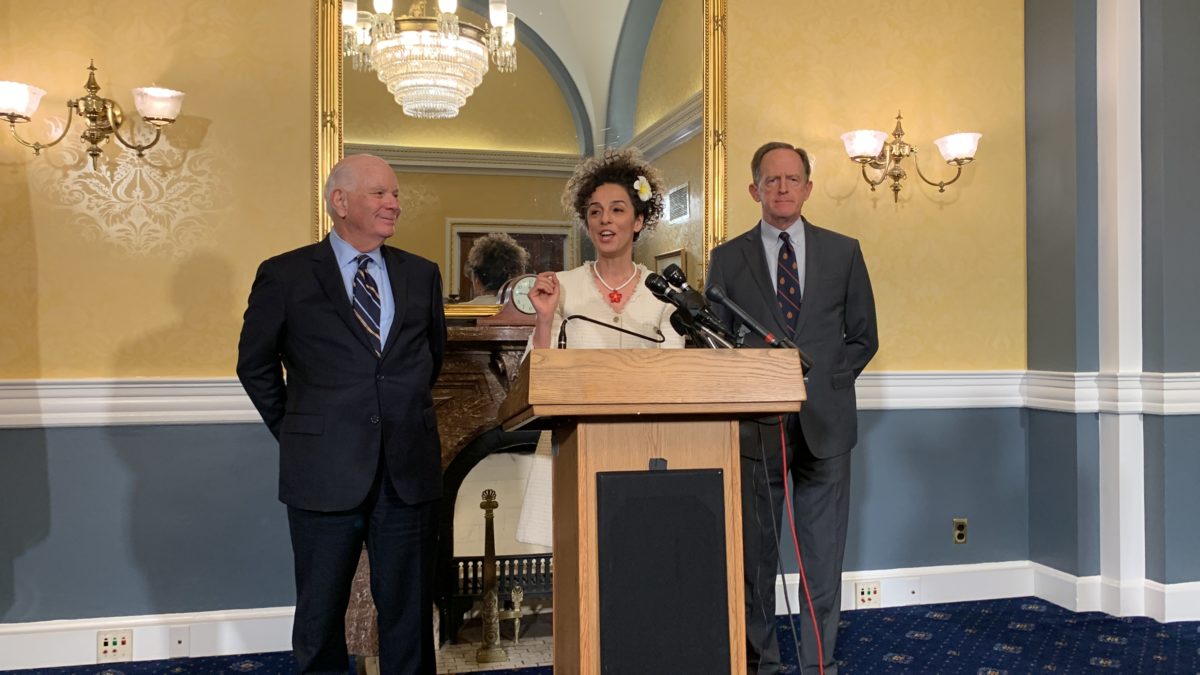 The bill, titled the Masih Alinejad Harassment and Unlawful Targeting (HUNT) Act of 2021, was named after the Iranian-American activist and journalist whom agents from Tehran plotted to kidnap from her Brooklyn home this summer. Alinejad joined Toomey and Cardin at a press conference announcing the bill. Sen. Jacky Rosen (D-NV) is also cosponsoring the bill.

“Clearly Iran is not getting the message that this malign behavior — especially against a U.S. citizen on U.S. soil — is not going to be tolerated,” Toomey said. “That’s why Sen. Cardin and I have teamed up to… hold Iran accountable and to deter further attacks.”

The legislation would mandate sanctions on Iranian government officials and agents — including those affiliated with paramilitary groups like Hezbollah — who “are knowingly responsible for, complicit in or involved in ordering, conspiring, planning or implementing the surveillance, harassment, kidnapping, illegal extradition, imprisonment, torture, killing, or assassination of citizens of Iran (including citizens of Iran of dual nationality) or citizens of the United States inside or outside Iran” who seek to expose corruption or defend human rights.

Behnam Ben Taleblu, a senior fellow at the Foundation for Defense of Democracies, told Jewish Insider that the bill could shift Iran’s actions on global operations against opponents.

“Iran’s capability and intent to continue these operations stems from its own risk-reward calculus of collective coercive action if exposed and caught,” he said. “Put differently, a firm response, such as mandatory sanctions on individuals engaging in transnational crime and repression, can attempt to change Tehran’s calculus.”

The bill also provides for optional sanctions against banks doing business with such Iranian operatives.

“There’s no Western bank in the world that wants to be subject to U.S. sanctions,” Toomey explained, “and so it creates a powerful incentive for reputable institutions around the world not to do business with anybody who shows up on this list.”

“Such measures can help Tehran think twice by inviting greater financial pressure by targeting the entire network of support Iran’s agents benefit from,” he continued.

Alinejad told reporters that, while the FBI foiled the initial plot targeting her, threats to her life continue.

“Twice since July when the FBI stopped the kidnapping plot I was forced to live in a safe house and move from my home. My life is upside-down because of the Islamic Republic,” she said. “As long as the Islamic Republic is in power, even here in America, I won’t have a normal life. Today, I had to leave the safe house [to] come to Washington, D.C.”

The bill is being introduced in the midst of nuclear talks with Iran in Vienna, which Toomey criticized multiple times during his remarks. The Pennsylvania senator denied that the bill is linked to those negotiations.

Cardin, who emphasized the need for “maximum pressure” on Iran to prevent it from reaching nuclear capability and compel it to reach a permanent agreement, said the legislation is important because it addresses areas that the nuclear agreement did not. Cardin voted against the nuclear deal in 2015.

“One of the areas I had concerns with the JCPOA is it was limited to the nuclear issues, didn’t deal with the other issues,” Cardin said. “So I am pleased that we are now dealing with other aspects of nefarious activities by the current regime.”

The bill’s text enumerates a range of other Iranian foreign operations targeting enemies of the regime in recent years, including surveillance of the Hillel and Chabad centers at the University of Chicago in 2020, a plot in Ethiopia to attack Israeli citizens in 2021 and the collection of information in Germany in 2018 about the local Jewish community, including kindergartens.

Toomey said he expects the bill to have “extremely broad support in the Senate” and that he is “cautiously optimistic given the early bipartisan support and what I think will be a broad consensus that we’ll be able to get this done.”

In a sidebar with Toomey and Cardin following the press conference, Alinejad remarked that the issue “need[s] more Democrats.”