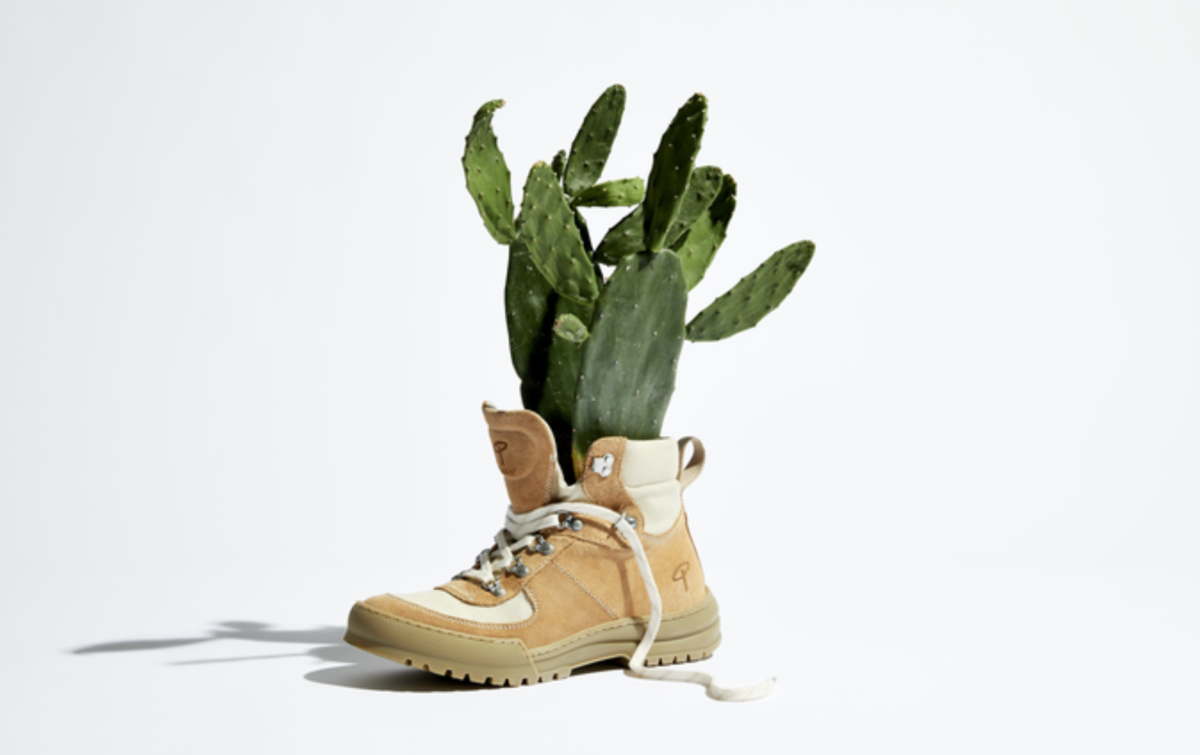 Growing up in an outdoorsy New England family, Noah Swartz didn’t have a choice when it came to hiking. The family business was Timberland, the footwear company known for its iconic brown boots, that his father sold for $2 billion a decade ago. But that didn’t mean the young Swartz was always excited to take part in family treks.

“Every 100 feet or so, [my mom] would give us another jelly bean to keep us going and kind of initiate us into the outdoors,” Swartz recalled of childhood hikes. The bribe worked; this week, Swartz launched his own footwear company, Erem, a sustainability-focused brand selling hiking boots for use in the desert. Erem’s initial investors include Jeffrey and Sidney Swartz, Noah’s father and grandfather who have each helmed Timberland.

“It always struck me as odd when I’d be in the Southwest or in Israel, and you’d see people wearing the same products and brands that you would see in New Hampshire or Vermont,” said Swartz, 28, who grew up in Newton, Mass. “Very different places, very different performance challenges. And yet, same brands, same products.”

Erem intends to offer a solution for a population that Swartz believes is underserved by the outdoors industry: the 1 to 2 billion people who live in the planet’s deserts and drylands.

“We are fundamentally first and foremost focused on desert landscapes and desert people,” Swartz told Jewish Insider in an interview from Los Angeles on Wednesday. The name Erem comes from Eremos, the Greek word for desert, and it’s also an acronym, for “exceptional, responsible, enduring and motivated.”

The company is headquartered in Henderson, Nev., a Las Vegas suburb, although its all-remote five-person team is spread around the country. Erem has partnered with the Arizona Trail, an 800-mile hiking trail that traverses the entire length of Arizona from Mexico to Utah, by committing 1% of profits to the nonprofit that oversees the trail. The company is also currently selling its shoes in two family-owned hiking stores in the Copper State, but most of its business will be direct-to-consumer.

“It’s one of the most rugged and extreme terrains on Earth,” Swartz said. “Arizona has got a population of 8 million people. Israel’s got the same population. So you start to throw in California and Nevada, Utah, New Mexico, lots of Colorado, lots of Montana, lots of Idaho, you actually kind of get to the point where, in fact, deserts are home for a ton of outdoor recreation.”

Right now, Erem offers two different boots, one for trail hiking and one for off-trail expeditions. Both are “biocircular,” a proprietary term used by Erem to describe the company’s sustainability ethos.

“Biocircular means two things: ‘bio,’ made only from materials and constructions that have a 100% proven path back to nature, and then ‘circular,’ which means they can be re-streamed into responsible next lives, including new Erem footwear,” said Swartz. This is different from calling them “biodegradable,” and it also doesn’t mean that they are entirely without plastic — but Swartz said they use high-quality materials and try to limit the use of plastic.

“Greenwashing is rampant in the outdoor industry,” Swartz said, referring to companies who claim to be more sustainable or eco-friendly than they are. “We are trying to raise the sustainability bar for the entire industry.”

This focus on sustainability is what Swartz says sets Erem apart, but it’s also the emphasis on creating shoes that are built for the surroundings where they are actually being used.

“The outdoor industry is really focused on cold and wet, which is really not what you want in the desert, at least most of the months of the year, where you really would want to be focused on hot and dry,” he explained. A waterproof hiking boot would work well for visitors to, for instance, Great Smoky Mountains National Park, which straddles North Carolina and Tennessee, the most-visited national park last year. But hikers in Utah’s Zion National Park, which had 3.6 million visitors in 2020, might want something more breathable — or at least that’s what Erem hopes.

An insulated, waterproof boot “is going to make your feet sweat and feel hot and feel gross” when hiking in hot and arid conditions, explained Swartz, who said it was an uncomfortable, blister-filled hiking trip in Utah that led him to think about desert-specific footwear.

At this point, Erem is limiting sales to the United States, although international markets factor heavily into the company’s future plans. “If you are recreating in North Africa, if you’re recreating in Morocco, you are recreating in the desert,” said Swartz. Some of Erem’s product testing occurred in Israel, where Swartz spent much of the pandemic with family who live there. “The search-and-rescue folks out of Beersheva are like, ‘Wow, yes, finally, somebody speaking our language.’”

As Swartz sees it, there’s something special about starting a company that also offers a value proposition. “For-profit businesses really can be the most efficient drivers of social environmental change,” Swartz argued, and Erem combines that belief with “this deep, forever passion for the outdoors and this decade-old obsession with the desert.”

Swartz now lives much closer to desert landscapes than he did growing up in Boston. He recently moved to Los Angeles with his wife after departing Cambridge, Mass., one semester shy of a Harvard MBA. “Harvard MBA dropout starts desert gear company,” he joked, offering a potential tagline for his business.

“I really fell in love with the desert, maybe just the contrast of coming from the very wet Northeast to going to a very different landscape like that,” said Swartz. “There’s really something about the desert that kind of makes my soul rest a little bit differently. I think, for me, it’s a combination of the vastness and the extremes of the desert combined with the fact of, I think in some ways, really unparalleled beauty.”

He ties the company’s mission to that trick his mom used to get him to hike as a child: “I guess I carry that jelly bean sweetness with me now still in the outdoors.”