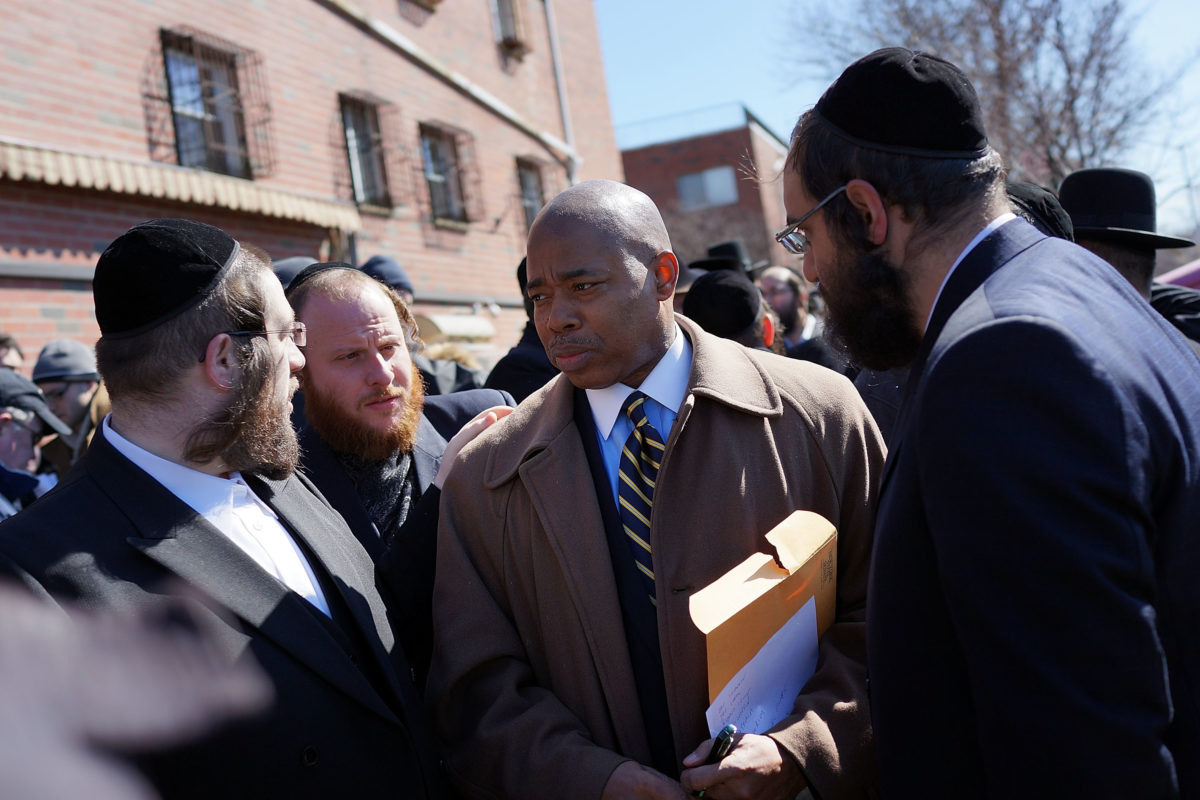 Then-State Senator Eric Adams attends a news conference with members of the Brooklyn Orthodox Jewish community to discuss the recent deaths of a Orthodox couple and their unborn child in a hit and run crash in the Brooklyn borough on March 4, 2013 in New York City.

The Flatbush Jewish Community Coalition, a local advocacy group representing the greater Flatbush Jewish community in Brooklyn, is planning to endorse Brooklyn Borough President Eric Adams for mayor this week, according to two sources with knowledge of the endorsement who spoke with Jewish Insider.

The nod, which is expected to arrive with just under three weeks remaining until the June 22 Democratic primary, represents a noteworthy boost for Adams, a leading candidate in the New York City mayoral race who, despite longstanding ties with Brooklyn’s Jewish community, has faced steep competition for Orthodox support from Andrew Yang.

Yang, a former Democratic presidential candidate and a leading contender in the upcoming primary, has locked up a number of endorsements from key Orthodox voting blocs, including Hasidic sects in Williamsburg and Borough Park, that are likely to give him an advantage in the increasingly competitive race to succeed outgoing Mayor Bill de Blasio.

Yang has positioned himself as a strong defender of the Hasidic yeshiva system in Brooklyn, suggesting that he will take a hands-off approach as mayor — a message that has resonated with Orthodox leaders.

But Yang’s popularity within the Orthodox community in some ways represents a rebuke of Adams, who claims to have developed strong relationships with Orthodox voters during his nearly eight years as borough president and, before that, representing Crown Heights and other neighborhoods as a state senator from 2007 to 2013.

In recent months, Adams seems to have made efforts to expand outreach within the Jewish community as he seeks to cobble together a coalition that will allow him to gain an edge over Yang, with whom he has competed for first place in several polls.

The two-term borough president recently ran an ad in Yiddish, casting himself as a Jewish community stalwart with a long history of helping yeshivas and other institutions, according to David Pollock, director of public policy and security at the Jewish Community Relations Council of New York, who said it is the first Yiddish ad from Adams’s campaign he has noticed this election.

Incidentally, however, the ad underscored an unavoidable tension. Pollock pointed out that some Orthodox leaders who are pictured in the ad posing with Adams have backed Yang, including Rabbi David Niederman, president and executive director of the United Jewish Organizations of Williamsburg.

Despite that flub, Adams has still gained some traction in recent weeks, having earned endorsements from Orthodox leaders in Staten Island and Far Rockaway as well as the Sephardic Community Federation in Flatbush and the Chabad community in Crown Heights.

An endorsement from the Flatbush Jewish Community Coalition — which was founded in 2013 and whose executive board includes Leon Goldenberg, an influential Orthodox real estate executive and talk radio host in Midwood, among other local figures — will no doubt add to that momentum.

The group’s chairman, Josh Mehlman, did not respond to a request for comment on Wednesday afternoon.

In a February interview with JI, Adams predicted that he would pull in strong support from Orthodox Jewish leaders throughout the city.

“I have a lot of credible messengers that know me,” he said. “Some people will come in and make one or two statements hoping to convince the Jewish community that they have been there with them. But I believe that when people start looking over time, they’re going to see the familiar face of Eric Adams.”