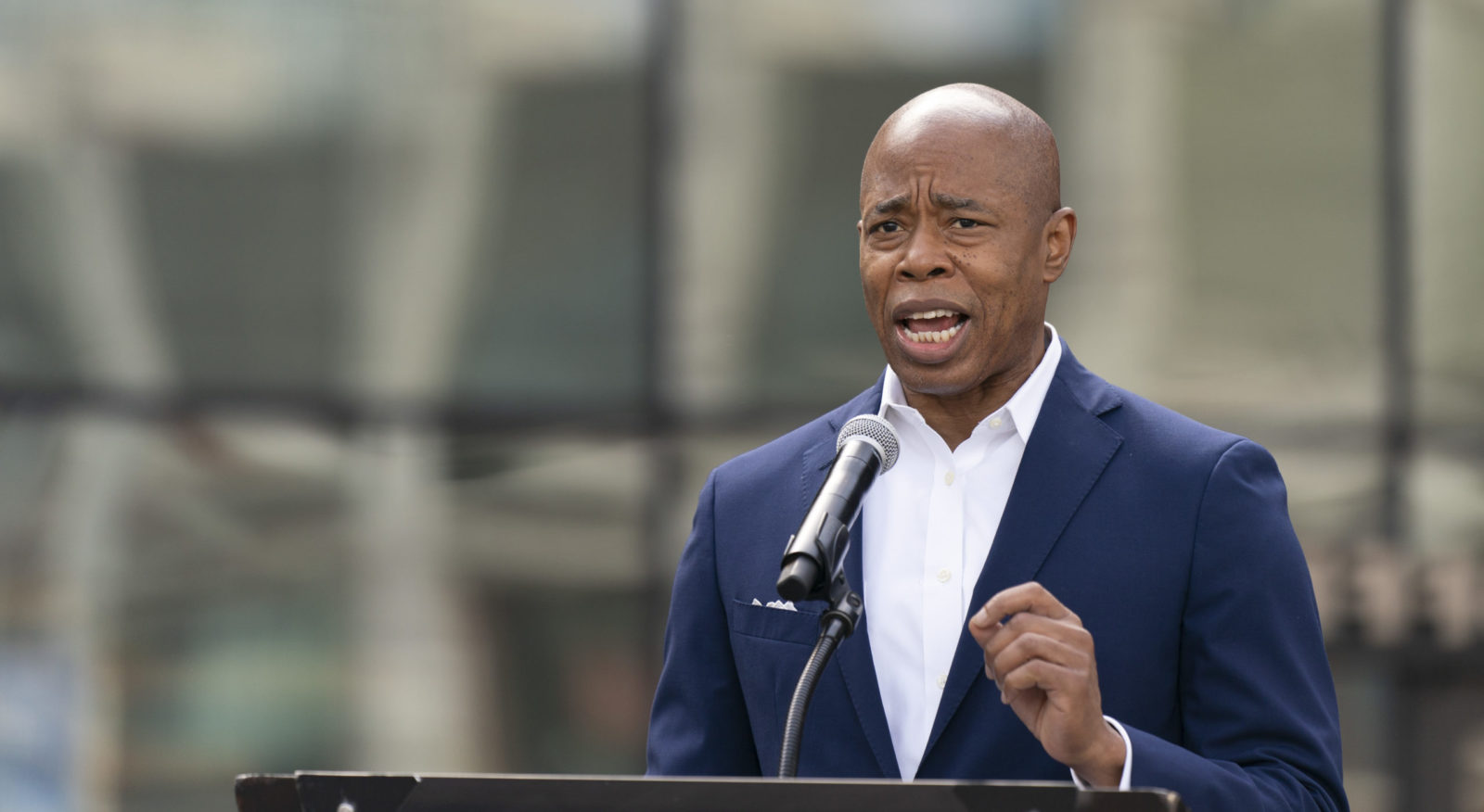 Back in the ’90s, Eric Adams, the Brooklyn borough president, was a brash New York City police officer whose public statements often seemed custom-made to incite controversy. He attacked Herman Badillo, the Puerto Rican-born former Bronx representative, for marrying a white Jewish woman rather than a Latina, and, during a failed congressional run, praised the antisemitic Nation of Islam leader Louis Farrakhan. Later in the decade, Adams registered briefly as a Republican — a move he describes as an act of protest against the Democratic Party’s lackluster approach to crime.

“In those days, he was much more of a bomb thrower than he is now,” said Andrew Kirtzman, a political communications strategist in New York who frequently interviewed Adams as a former longtime host of “Inside City Hall,” a local news show on NY1. “He was a great guest because you never really knew what would come out of his mouth.”

While his reputation as a loose cannon appears largely to have faded, there are still some moments in which Adams sends out the occasional warning shot. In recent years, he has made headlines for demanding that New York transplants “go back to Iowa” and for announcing that he would carry his handgun to houses of worship after the Tree of Life synagogue shooting in Pittsburgh. “None of that really surprised me when I heard it because he’s not a starchy, programmed politician,” Kirtzman said. “He’s genuine, he’s real and he’s outspoken.”

Despite his reputation as something of a provocateur, Adams is now carving out a niche for himself as one of the leading establishment players in the race, with just four months remaining until the June primary.

The two-term borough president, now 60, extols both former mayors Michael Bloomberg — for his data-driven policies — and David Dinkins — for his “compassion.” Adams is decidedly pro-development, claiming that he will bring back a recently abandoned proposal to rezone Brooklyn’s Industry City — but also argues in favor of upzoning affluent neighborhoods as part of an effort to lower housing costs. And while the former cop rejects calls to defund the police, as a founder of the advocacy group 100 Blacks in Law Enforcement Who Care, he speaks from experience about racial injustice.

Adams sees no dissonance between his current approach and the somewhat more contentious path he once walked. “I always say, you are the man, at 43, the man you were at 23, and you stood still,” he told Jewish Insider in a recent interview, characterizing himself as a “pragmatic progressive” who is well-equipped to steer New York away from a crushing economic crisis compounded by the coronavirus pandemic.

“A lot of people are just starting out in the mayor’s race. I have been moving towards this place for over 20-something years,” Adams said. “I know our city is better than what we’re seeing. We’re dysfunctional, and many of those crises that we’re experiencing are self-inflicted. Now, more than ever, we must have a city that’s not dysfunctional, where agencies are not inefficient, because those inefficiencies are creating inequalities, and I think the fullness of my life is going to lead this city in the right direction.”

According to the latest public polling, Adams is in second place behind Yang, garnering support from a projected 17% of likely primary voters. “We are extremely excited about where we are,” he said. “We’re not surprised by our status.”

“There’s a real United Nations appeal to the campaign,” Adams added, noting that he has raked in $8.6 million from a diverse array of contributors.

His stewardship of the most populous borough in the city, he said, gives him an edge. But he claims that his appeal extends beyond Kings County. “I grew up in Queens, where my mother still lives. We’re going to have a strong southeast Queens presence. When you put that coalition together, that’s a great start, and we’re going to do well in parts of the Bronx, parts of Manhattan. So we have put together a good coalition.”

Norman Siegel, a lawyer and former executive director of the New York Civil Liberties Union, described Adams as an “energetic” candidate who would “bring the city together” if elected. “This is a natural evolution for him,” said Siegel, who has known Adams for three decades and supports his candidacy. “He works real hard, he’s smart, he cares about all New Yorkers.”

His past comments in support of Farrakhan and the Nation of Islam do not appear to have hindered his relationship with his Jewish constituents. “At the heart of it was public safety,” Adams explained. “I was a police officer that was watching how crime was destroying our communities, and really, the police department was ignoring it. We threw our hands up. Community leaders were ignoring it. And there was one organization, the Nation of Islam locally, who played a major role in coming up with real programs around crime fighting. They were successful in pockets of the city, and it was my goal to have these programs really scaled up to train other local community groups to deal with issues of crime.”

“I’m not a Muslim, I’m a Christian,” Adams added. “I’m never supportive of any antisemitic statements and would never be supportive of that. I don’t believe in that philosophy.”

Adams has established a strong rapport with his Hasidic constituents as borough president and, before that, as a New York state senator representing Crown Heights and other neighborhoods throughout Brooklyn. “I think it was born out of policing when, as a lieutenant, I was introduced to many of these security patrols, and from those patrols, I started to see the high level of volunteerism,” Adams recalled. “The Jewish community, particularly the Orthodox community, within their language, is giving back.”

“He’s sincere,” said Mordy Getz, a Hasidic businessman in Borough Park, recalling that Adams spoke out against antisemitism after a shooting at a kosher grocery store in Jersey City two years ago. “Because he has that past and also he knows how people in our community were hurt by bad actors, I think he’s a perfect uniter for the city now.”

As a public servant, Adams has often spoken out against rising incidents of antisemitism. If elected, he said he would expand on a program he established called “Breaking Bread, Building Bonds,” which facilitates dinners between different ethnic groups in the city to encourage dialogue. Beyond that, he added, educational initiatives similar to “No Place for Hate,” a program for Brooklyn students that focuses on anti-bias training and combating bullying, which Adams worked on with the Anti-Defamation League, are vital to ensuring that students aren’t ignorant of the struggles faced by fellow New Yorkers.

“When you have a young man in Brownsville draw a swastika on the wall, and he doesn’t know the meaning of that swastika,” Adams said, “that’s a real indicator that we have not carried out our basic education.”

Adams believes the city has unfairly targeted the Hasidic community throughout the pandemic. “I told the city from the beginning that we need to speak to the credible messengers in all communities in general, but specifically in the Jewish community,” he told JI. “We did it wrong, and we did not respond correctly.”

As mayor, he said he would work to dismiss all fines issued against Jewish community members who haven’t followed coronavirus restrictions. “In the meantime,” Adams said, “I have been in communication with leaders to come up with funds to assist those businesses that are struggling so we can pay for those fines and not have them hanging over their heads.”

“I heard him on ‘The Brian Lehrer Show’ right when there were some issues on who is wearing masks and who is not wearing masks and this and that,” said Alexander Rapaport, the founder of Masbia, a network of Jewish soup kitchens in Brooklyn and Queens. “And he just came with a little bit of some consensus, less finger-pointing, and more ‘to each their own.’”

For Rapaport, this approach is in keeping with the public servant he has gotten to know over the years. “He likes to come up with a policy that sounds like music to everybody,” Rapaport said.

Adams said he first thought of running for mayor years ago when he entered the police force. “I saw how we turned around a dysfunctional police department to a functional one,” he said. “I knew we could do that to every agency, and I wanted to acquire the skills that were needed to accomplish that.”

“It’s so important that the city must grow, and growth will indicate how well we’re doing,” he added. “We have to grow our way out of this financial crisis that we’re in.”

Though Adams came under fire last November for holding an indoor fundraiser in defiance of  COVID-19 related gathering restrictions, he emphasizes that he is now doing Zoom calls with the occasional in-person campaign event. Recently, he said, he was in the Bronx handing out masks at Yankee Stadium. “We do it in a safe way within the parameters, and we use it as an opportunity to help people during this time.”

It remains to be seen which candidate will earn the backing of the Orthodox community, portions of which often vote monolithically. But at the moment Adams appears to be a favorite. “He’s always been fairly moderate and he’s really one of the few people that we can really support,” said Leon Goldenberg, an Orthodox Jewish real estate executive and talk radio host in Midwood who is active in Jewish causes. “He hasn’t clarified his stance on yeshiva education, which is an issue, but he’s got a lot of friends in the Orthodox community.”

Adams has remained somewhat vague on the issue of promoting secular education in yeshivas, noting in an interview on Friday with BoroPark24 that he would “appoint community ambassadors who understand local educational issues to serve as intermediaries between the schools and the city.” However, he told the Forward in early February that he plans to “clearly communicate expectations and baseline standards according to state education law, as well as enforce compliance where necessary.”

Hank Sheinkopf, a veteran Democratic strategist in New York, believes that Adams is in a strong position given his relationship with Hasidic voters. “He is the only one in the race who can put together a coalition that resembles an old one,” Sheinkopf told JI. “What does that mean? New York City politics was dominated by coalitions of Blacks and Jews voting together.”

“That coalition,” he added, “could be the winning combination in a ranked-choice voting primary system.”

For his part, Adams is expecting that he will pull in strong support from the Hasidic community, a formidable voting bloc in the hundreds of thousands. “I have a lot of credible messengers that know me,” Adams said. “Some people will come in and make one or two statements hoping to convince the Jewish community that they have been there with them. But I believe that when people start looking over time, they’re going to see the familiar face of Eric Adams.”