The new book explores the 2020 election season through the Jan. 6 Capitol riot 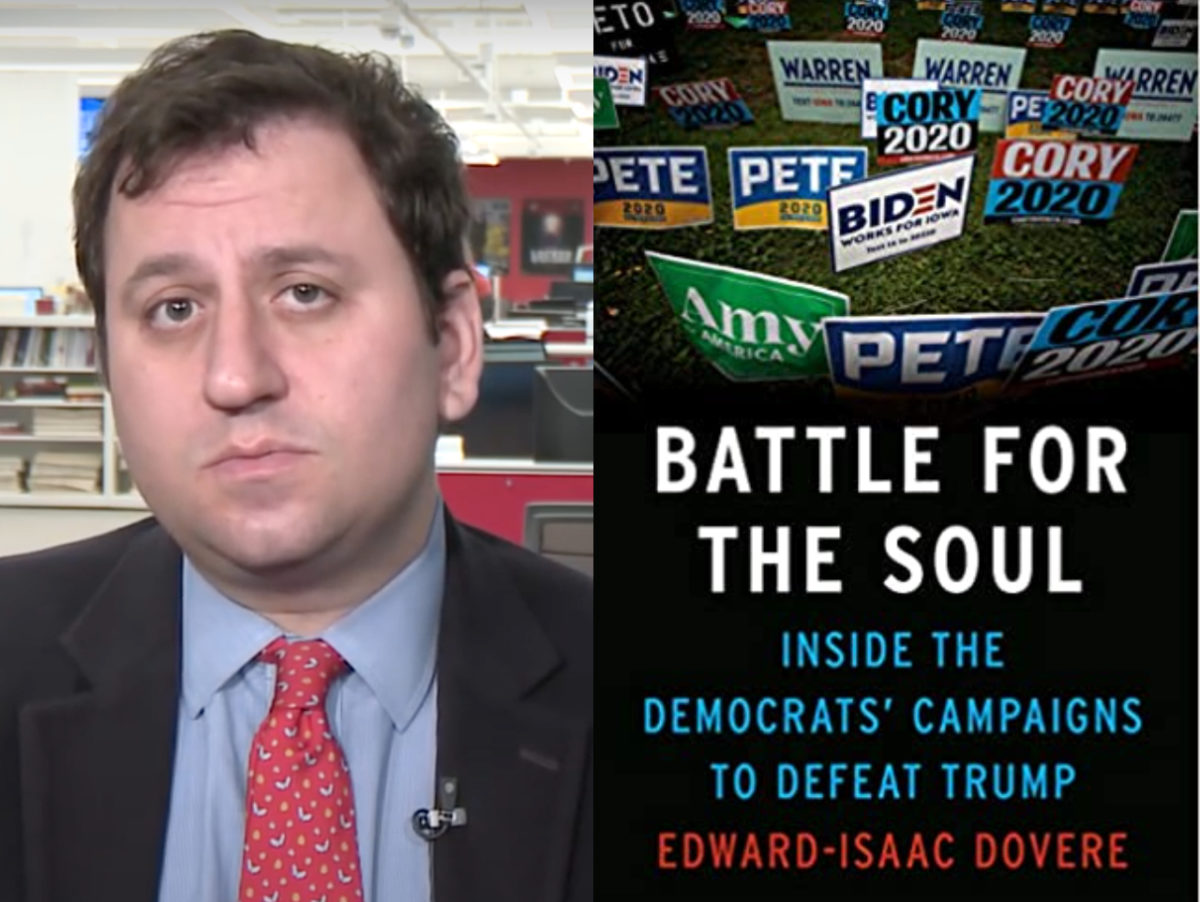 The day before Donald Trump’s inauguration in 2017, Edward-Isaac Dovere published a POLITICO Magazine article with a grim conclusion for Democrats. He called them a “decimated party,” working on a “not-so-certain revival strategy” after having “their brains scrambled by Trump’s win.” No one in the party could believe what was happening.

The article prompted a book contract, with Dovere pledging to write a reported account of the 2020 campaign. His project could have gone in dramatically different directions — would the Democrats, after a divisive primary with a historic 26 candidates, be able to eke out a victory? Or would they lose again to the historically unpopular Trump?

The result was both predictable and, somehow, entirely unexpected: Joe Biden, a Washington fixture for more than four decades, ascended to the Oval Office by running on what he described to Dovere as the most progressive platform in history. Perhaps the biggest surprise? “The Biden brand was stronger than the Democrats’,” Dovere told Jewish Insider in a recent interview. Biden won states like Maine, where Democrats lost what were considered competitive Senate races by a landslide.

Dovere was a fixture on the campaign trail, bringing two voice recorders with him to every interview: One that would be used for stories he could publish in real time, for his day job at The Atlantic, and another that would store conversations that would not appear or be reported publicly until his book came out. The result is Battle for the Soul: Inside the Democrats’ Campaigns to Beat Trump, which was released on Tuesday.

There were several instances in the nearly three years that Dovere spent on the book when he felt things could not possibly get any crazier. In the late summer and fall of 2019, when news broke about Trump’s call to Ukrainian Prime Minister Volodymyr Zelensky and raised questions about his solicitation of foreign involvement in U.S. elections, Dovere thought this was as wild as it would get. “We knew that it was gonna be intense, that it was shaking things up for Biden and for others,” he recalled, “and I was like, ‘How am I possibly going to cover this?’” He had that same thought countless more times in the year that followed.

On Jan. 4, 2021, Dovere spoke with his book editor, and said he would be ready to turn in his final chapter after the Georgia Senate runoff elections the next day. On Jan. 6, he was sitting in Delaware writing that final chapter when the riot happened at the U.S. Capitol — and changed everything for Democrats, and for the ending of his book. “I had an email from my editor that said, ‘We’re going to push the book back three weeks, because we’re going need you to write on all this,’” he noted.

The book contains lots of juicy campaign gossip — recent excerpts have reported on Bernie Sanders’s travel demands (including king-size beds and a particular temperature) and Biden’s response to then-Sen. Kamala Harris skewering him at an early primary debate — but it also provides an inside look into the hectic infighting that marked the intensely crowded Democratic primary battle ahead of the 2020 election.

Dovere did not set out to write a post-mortem; instead, he reported contemporaneously, documenting key campaign events as they happened. He had declined an earlier offer asking him to write a book assessing where Democrats went wrong in 2016, having found that political operatives have a habit of revising history when reflecting on events that are in the past. “What I’ve learned over doing that is that really, you see how people’s accounts of what happened change when they’re trying to fit things in after the fact,” he said. “After the fact that people are like, ‘It must have been that that was the turning point moment.’ So I try to meld that sense together and have the book reflect on what it felt like as it was happening.”

For instance, in hindsight, it’s easy for observers to say that former New York City Mayor Michael Bloomberg’s decision to enter the race was doomed from the beginning. But that’s not at all the case. “On the night of Super Tuesday, about an hour before the polls close, I was in West Palm Beach at what was conceived of as this Mike Bloomberg party that was going to be his big step into the race,” Dovere recalled. Bloomberg never got to take his victory lap; two weeks later, he earned only 8% of the vote in Florida. The only place where he earned more than 15% was American Samoa, where he got 49% of the vote and just four delegates. “There’s a whole chapter on Bloomberg in the book, and what went wrong with his campaign. And part of it is this sense that the money was going to be just all-consuming and all-powerful.”

The book includes a heavy focus on the competing factions within the Democratic Party, but reporting on the events as they happened — and taking notes in a long-running Google doc to help him remember what each moment felt like — was a way to use a narrative to make his point, rather than offering boring analysis. “It became a way of not just telling a dry story of well, progressives need to figure out what they are,” Dovere said.

Dovere’s path to covering the Democrats’ 2020 campaign started in New York City, where he began his reporting career covering City Hall in Democrat-heavy Manhattan. “When I left New York, there were three Republicans of the 51 members of the City Council,” Dovere explained. “In New York, it’s kind of, ‘What flavor of Democrat are you?’ That goes for the Republicans for the most part too. It’s like, ‘Oh, you guys are just like conservative Democrats anyplace else in the country.’”

Many of the people he covered in New York City later rose to national prominence, and as he kept in touch, the scoops he got — first at Politico, and now at The Atlantic — often involved Democrats. “People in New York end up being a feeder in that way,” he said.

Last spring, Dovere wrote a story that left a major impact on New York politics. It was relatively early in the pandemic, with people still quarantining at home, and New York City was slowly emerging from a devastating coronavirus surge. Dovere got a tip that then-Rep. Eliot Engel (D-NY) was spending the quarantine period in the Maryland suburbs of Washington, D.C., rather than in his district covering the Bronx and parts of Westchester County. “There were events that Engel and his office were promoting as him attending in his district,” Dovere recalled. “There was a Friday when there was one event in particular, that was handing out supplies for COVID, and Eliot Engel’s going to be there. I checked in and was told he was not actually there, from somebody else who attended.” So Dovere masked up — it was early enough that he did not yet have real masks, and instead tied a scarf around his face — and drove out to Maryland.

Dovere got out of his car, voice recorder in hand, and knocked on the door. Engel answered; Dovere explained why he was there, and Engel tried to pretend he had been both in the district and Maryland. Eventually, he admitted he had not been home during the pandemic. “It was important when an elected official was representing himself as doing something important around the pandemic — he was saying that he was in the district helping with the coronavirus, and he wasn’t.” His story, titled “Why This Democrat Won’t Go Home,” gave Engel’s primary challenger Jamaal Bowman some much-needed momentum, leading to his defeat of Engel, one of the most prominent Jewish members of Congress who served for more than 30 years.

Dovere’s book did not touch on the thorny politics around Israel and the Middle East that have highlighted divisions among Democrats in recent weeks. “Israel did not come up,” he said. But Dovere pointed out that from the beginning, Biden’s campaign took a unique stand against antisemitism, rooted in what happened at the 2017 Unite the Right rally in Charlottesville, Va. “Charlottesville is the seminal moment for him. It’s the moment that changes everything for him, when he goes from thinking, ‘Trump is bad, but we’ll get through this,’ to, ‘He really needs to go, and I probably need to run,’” said Dovere.

Many other candidates talked about the deadly rally in binary racial language: “It quickly got turned into, in most people’s minds as just generally racist, or a Black/white issue. But those were neo-Nazis waving Nazi flags, chanting, ‘You will not replace us,’ which is about Jews,” said Dovere. “Every time that Joe Biden has talked about Charlottesville publicly, he uses the same phrase, and he talks about that they were ‘spewing the same antisemitic bile.’”

In Dovere’s view, Biden’s understanding of antisemitism is central to the way he views racism and hatred in America. “As someone who has been in Democratic politics a long time, he’s worked on a lot of these issues,” noted Dovere. “It’s important to him to talk about Jews, and seeing that antisemitism is a gateway into all sorts of other hate, to not let that just be swept aside.”