The bill seeks to forestall a reentry into the 2015 Iran nuclear deal, amid ongoing indirect talks between the U.S. and Iran 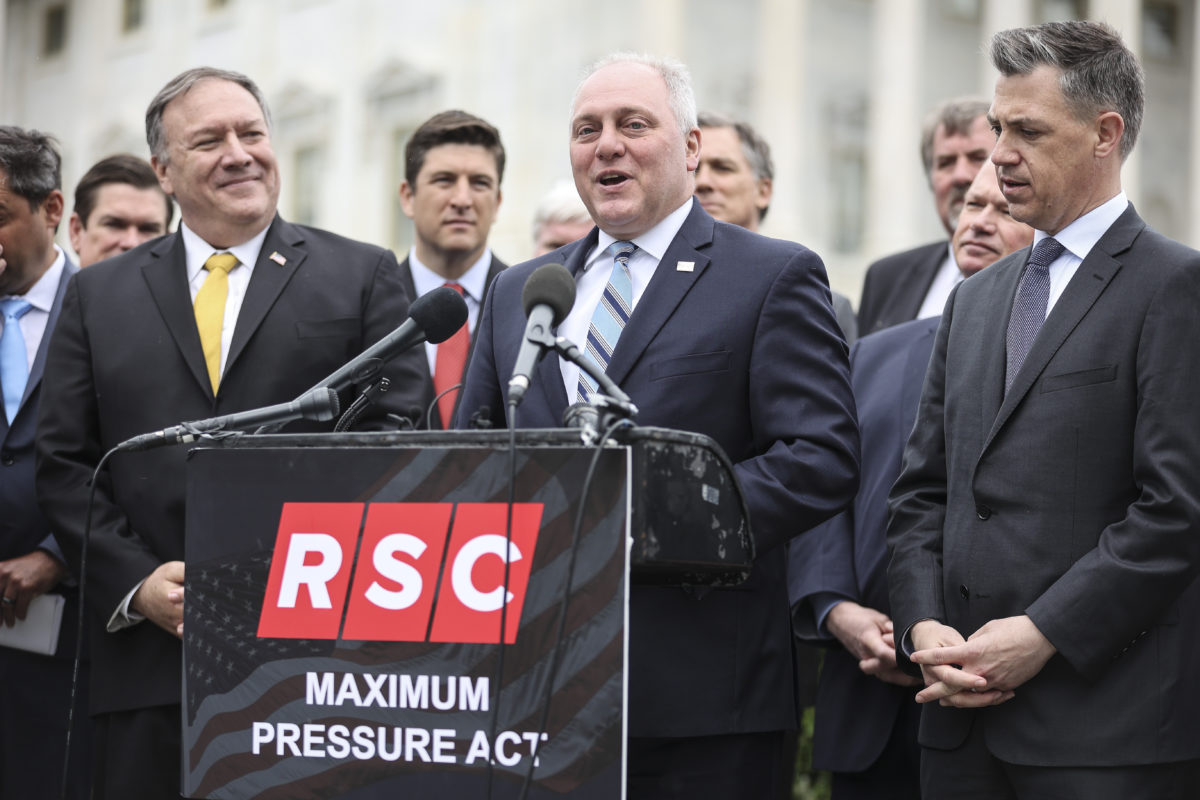 Rep. Steve Scalise, (R-LA), center, joined by former U.S. Secretary of State Mike Pompeo, left, and Rep. Jim Banks, (R-IN), right, speaks at a press conference of the Republican Study Group to introduce their Maximum Pressure Act against Iran at the US Capitol in Washington, DC, on April 21, 2021.

Members of the Republican Study Committee, a conservative House GOP caucus, announced plans on Wednesday to introduce legislation, with the backing of 83 House Republicans, that would enact further sanctions on Iran and limit the Biden administration’s ability to roll back sanctions.

The 118-page “Maximum Pressure Act” is by far the most extensive and widely supported GOP legislation relating to Iran’s nuclear program introduced this congressional term, but without support from any Democrats, has little chance of passage. The announcement comes amid signs of incremental progress in indirect talks between the U.S. and Iran in Vienna. 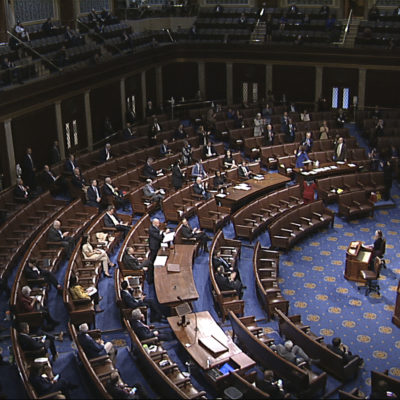 Former Secretary of State Mike Pompeo appeared at the press conference announcing the bill, which was at times drowned out by a small group of Code Pink protesters along the Capitol perimeter fence shouting slogans including “Pompeo go home” and “Peace with Iran.”

“This bill will do three things. It shows that Congress is not bound to agreements by the president that purports to speak on our behalf,” RSC chairman Jim Banks told reporters. “Secondly it codifies the Trump administration’s maximum-pressure strategy until Iran meets the 12 demands laid out by former Secretary of State Mike Pompeo in May of 2018. And thirdly, it expands the existing, bipartisan Iran sanctions mandated by Congress, making it the toughest sanctions bill ever introduced in Congress on Iran.”

It also requires congressional approval for the president to lift any sanctions on Iran — a provision proposed in bills recently introduced by Sen. Bill Hagerty (R-TN) and Rep. Michael McCaul (R-TX) — and places time limits on presidential authorities to grant sanctions waivers and licenses. The bill would also mandate that any future agreement with Iran be submitted for Senate ratification as a treaty, a provision proposed in recent legislation from Rep. Andy Barr (R-KY) and Sen. Marsha Blackburn (R-TN).

In his own remarks, Pompeo emphasized that the Trump administration’s sanctions had deprived Iran of $123 billion in foreign exchange reserves in two years, although the regime has continued to expand its nuclear program and continued direct and proxy attacks throughout the Middle East.

“A pressure campaign — an effective one like we delivered — will continue to make the Iranians make difficult choices. Hard choices about whether to underwrite Hezbollah, underwrite the militias in Iraq… underwrite the Houthis,” Pompeo said. “I’m proud of this legislation. It talks about the things that need to be done for Iran to rejoin the community of nations.”

Pompeo’s prominent involvement in this legislation is somewhat unusual for a former secretary of state. Pompeo, who served in the House from 2011 until joining the Trump administration in 2017, is widely believed to be positioning himself for a future presidential run.

“I’ve been working on this issue with respect to Iran for an awfully long time… Today I’m a private citizen, I’m here in my status as a private citizen,” Pompeo said. “As a private citizen I care deeply that Iran never has a nuclear weapon and when I saw this legislation forming, I talked with Congressman Banks and I said I want to be a part of making sure that this is successful.”

Republican Whip Steve Scalise (R-LA), the second-highest ranking member of the House GOP, emphasized that the legislation is especially critical to protect and reassure Israel.

“There’s nothing more important in foreign policy and diplomacy [than] making sure that our friends around the world know that we have their back. Israel never had that assurance during the Obama years. They need to have that assurance these days,” Scalise said. “Any attempt to bring [Iran] back into the world economy and give them that legitimacy undermines America’s interests, undermines Israel’s interests and it jeopardizes our national security.”