The gender-neutral, fashion-forward line pays homage to his grandparents, one of whom died of COVID-19 last year 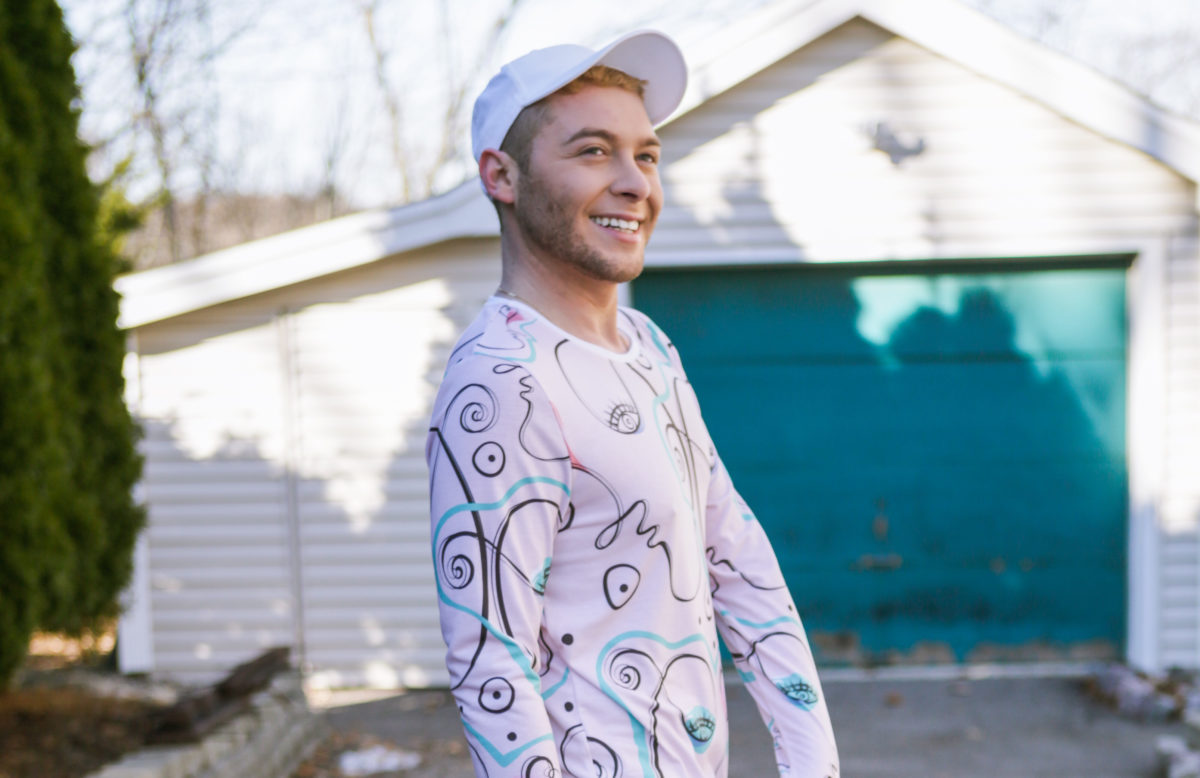 The brim of the Signature Keppie Cap is chock full of Xs and Os and hearts — a fashion love letter with hugs and kisses to designer Jordan Star’s Jewish grandparents. The crew-necked and loose-fitting BH Relaxed Tee is adorned with the letters “b” and “h” in a broad brushstroke, lower-case design — a fashion inside joke for millennials flexing their Yiddishkeit and sense of Jewish pride.

Welcome to ‘bubuleh,’ the new retro/modern fashion line recently launched by 27-year-old Jordan Star, who describes his new fashion brand as “handmade with love and just a little anxiety.”

The latter part of that could not be truer: there was anxiety involved merely in determining the spelling of the Yiddish brand name.

“I was so stressed out over how to spell ‘bubuleh,’ and everyone spelled it differently, so I just picked one,” Star said, speaking to Jewish Insider days after the launch of his new fashion line, during a phone interview from Boston, where he has been staying with family during the pandemic.

During ordinary times, Star lives in Los Angeles, where his clothing venture — a seamless stitching together of his unapologetic Jewish pride, his LGBTQ identity and his fondness of Yiddish culture — is based.

“For me, being Jewish and being gay are two very distinct aspects of my identity — but I see a lot of parallels between them,” he said. “When someone is gay or Jewish, they face unique and intersecting struggles and questions and relationships. It was important to me for that to come across. I want this brand to connect with a lot of people and be authentic to me.”

The use of Yiddish is intended to evoke familial comfort. Bubuleh is a Yiddish term of endearment, roughly translating to “sweetheart,” When Star launched the brand last month, he chose the name because it is a “word full of warmth, characterizing those nostalgic moments that have given our lives the most meaning and joy,” the company’s website reads. The website also features a photo of Star hugging his grandmother, and the tagline: “Join the Mishpacha (Family).”

The brand is Star’s way of expressing his love for his family, including two grandparents who succumbed to illness during the coronavirus pandemic — one to COVID-19 and one to cancer. And it is also his way of saying something about himself. Star is prone to going up to friends and greeting them with, “Hi bubuleh, how are you doing?” — a welcome, he says, that “comes out of a deep admiration for my family and my culture.”

“This brand, for me, was celebrating my family history in lieu of being able to protect them,” Star said.

Raised in a Boston suburb, Star has long incorporated Judaism, advocacy and a drive for success into his pursuits. As a teenager in high school, Star was part of the successful lobbying effort to push Massachusetts state legislators to pass Logan’s Law, an act prohibiting the devocalization — or debarking — of dogs and cats.

While studying at New York University’s Gallatin School of Individualized Study from 2012-2015, he served as co-president of Keshet: LGBTQ Jews on Campus, working for inclusion and equality of LGBTQ Jews and their families. He also served on the board of NYU’s Hillel.

After college, Star served as a fellow with Venture for America, which was founded by 2020 Democratic presidential candidate and New York City mayoral hopeful Andrew Yang and prepares recent college grads for careers in entrepreneurship. He then relocated to the West Coast to work for Q.Digital, an LGBTQ-owned media network, before leaving his job last year to launch bubuleh. Knowing little about designing clothes, he took online classes, studied with a seamstress who taught him about pattern making and, he said, began “pulling from existing sources of inspiration, [including] magazines and vintage photos.”

In starting bubuleh, he received logistical support from Venture for America, along with Jewish and LGBTQ peers.

A photographer during his free time, Star worked hard to integrate ageless and retro styles, patterns and colors into bubuleh’s attire. Even wallpaper, he said, provided unlikely inspiration for the clothing.

In line with Star’s inclusive values, all of the products are unisex — the site advises women to order one size down for a tighter fit.

Unlike other Yiddish or Jewish clothing brands that wear their Jewishness on their sleeves, so to speak, bubuleh does not define itself simply by featuring catchy Yiddish or Jewish phrases on the clothing. Perhaps the most obviously Jewish design is a T-shirt with the letters, BH, which stand for “Baruch Hashem,” or “Thank God,” on the front. Star explained that the design was inspired by “younger Jews like myself using ‘BH’ in a sarcastic way when looking for good luck,” Star said.

Star said he avoided having clear Jewish identifiers on his clothing because of his concerns about antisemitism.

“Antisemitism in the U.S. is rising, and having Yiddish on clothes is an identifier people are scared of, which is why, for this brand, I am focused less on the Yiddish words, less on clothes that have cute Yiddish things, and more on the spirit of Yiddish,” he said.

Also informing his decision to avoid overtly Jewish phrases is his desire to create clothing that is not just “cute and gifty” but also “something you’d wear every day.”

Since launching the company on his birthday, Dec. 15, Star has been taking preorders as a means of raising revenue for more inventory.

The pandemic has posed a challenging climate for a business launch, and Star acknowledged the difficulties of starting a clothing brand during COVID-19. The uncertainty of when people will return to their regular social and professional lives creates unpredictability regarding what kind of fashion people will need, he said.

The pandemic “makes it more difficult to plan on what people want, but it’s an exciting challenge,” he said. “It gives me [a] great reason to connect with people.”

“Him just trying to bring it back and pay homage to his grandma, it’s very sweet. In the world of brands, everything is cyclical. Him trying to bring old-Yiddish-style-meets-modern-day is such an intersection of two things I never thought would exist,’ Churchill told JI. “It’s interesting, eclectic and charming.”

Star hopes bubuleh will be just the beginning for the budding designer, who has ideas for creating a fashion brand dubbed ‘faygeleh,’ reclaiming a Yiddish word used to deride gay people, as well as fashion lines inspired by “bubuleh-esque figures,” including Barbra Streisand, Bette Midler and Joan Rivers.

“We have a lot in the works worth being excited about,” Star said, adding he hopes the clothes appeal to people who appreciate the aesthetics of the generations that preceded them.

“This is a grandson taking inspiration from his grandparents. Bubuleh is for anyone who is unapologetically proud of who they are, where they come from and love a great outfit with meaning behind it. It can be someone 16 or 70,” he said. “It’s all great with me.”