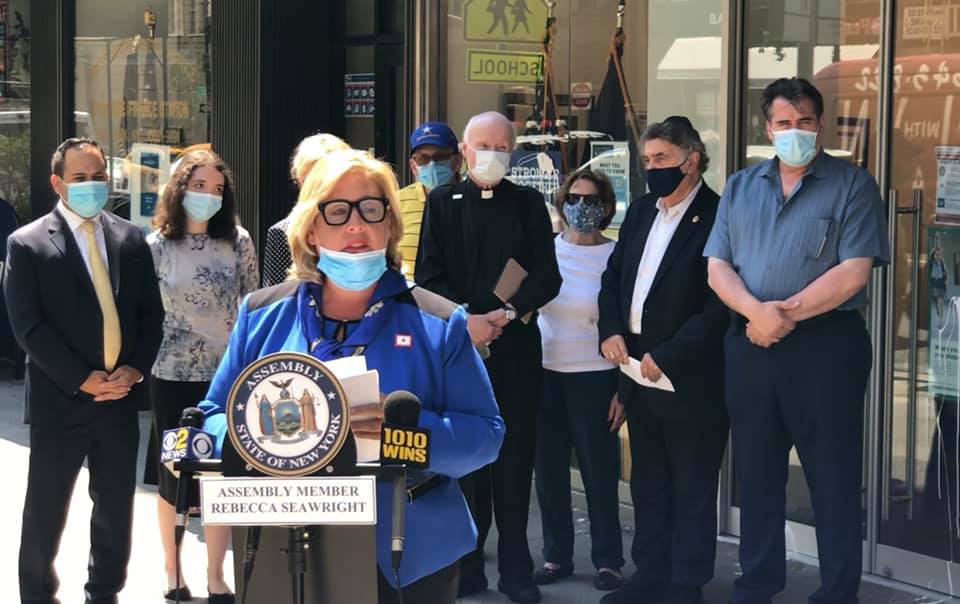 Seawright’s office, located on Park Avenue on Manhattan’s Upper East Side, was sprayed with white paint overnight on Monday. A vulgar and antisemitic message alluding to Jewish donors was written on a large poster and slid under the door.

“I want to speak loud and clear today that we will never be intimidated by this criminal act,” Seawright said during a press conference, flanked by Rep. Carolyn Maloney (D-NY) and faith and community leaders, outside her office on Tuesday. “We will stand together, speak up, and remain vigilant against this violence and antisemitism.”

Though not Jewish, Seawright is a member of the Assembly’s Jewish Legislative Caucus. Her husband, Jay Hershenson, who serves as vice president for communications and marketing at Queens College of the City University of New York, is Jewish.

Seawright, who has represented the district since 2015, was knocked off the ballot’s Democratic line last month after missing a key deadline during the peak of the coronavirus outbreak. Following the ruling, she gathered more than 5,000 signatures to get on the November ballot on the “Rise and Unite” independent party line.

Maloney, who represents the neighborhood as part of the 12th congressional district, told JI that the incident was “extremely disturbing.” Maloney pointed out that the Never Again Education Act, which she sponsored in the House and which allocates resources to Holocaust education, is aimed “to stop this kind of hatred.”

Rabbi Joseph Potasnik of the New York Board of Rabbis, who participated in a virtual town hall on combating antisemitism hosted by Seawright’s office last month, said that it’s important that people of all faiths speak out against acts of antisemitism. ”The truth is that antisemitism is anti-Christianity, is anti-Islam. A person who hates me today is going to hate you tomorrow,” he explained. “You scratch the skin of an antisemite and you will find a racist and many other layers of bigotry.”