In candidate questionnaires, the two Senate candidates offered their takes amid accusations of antisemitism against Perdue 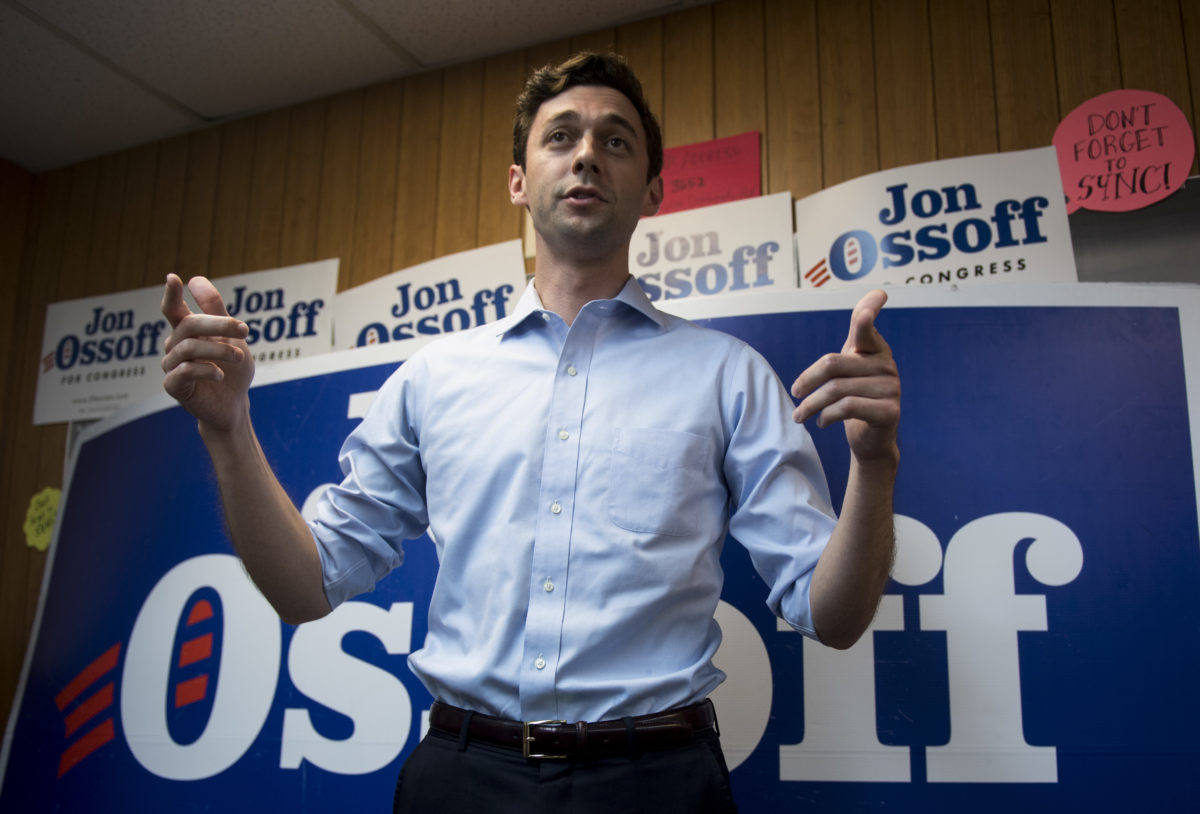 UNITED STATES - JUNE 18: Democratic candidate for Georgia's 6th Congressional district Jon Ossoff speaks to campaign workers and volunteers at his campaign office in Chamblee, Ga., on Sunday, June 18, 2017. Ossify is facing off against Republican Karen Handel in the special election to fill the seat vacated by current HHS Secretary Tom Price will be held on Tuesday.

“Antisemitism has no place in society, period,” he told Jewish Insider in a candidate questionnaire. “It’s horrifying any time you see hate perpetrated against Jewish people in the United States or anywhere around the world.”

Despite his emphatic beliefs, Perdue’s opponent in Georgia’s upcoming Senate election, former journalist Jon Ossoff — who is Jewish — has argued that Perdue himself has recently perpetrated antisemitic hatred.

In late July, Perdue’s campaign tactics came under scrutiny when the first-term Republican senator published a Facebook ad that enlarged Ossoff’s nose — a classic antisemitic stereotype. A spokesman for Perdue told The Forward, which first reported on the image, that the edit was “accidental” and the ad would be removed from the site.

But Ossoff wasn’t buying it. “This is the oldest, most obvious, least original antisemitic trope in history,” the 33-year-old Democratic candidate wrote in a Twitter statement when the ad was publicized by national media outlets. “Senator, literally no one believes your excuses.”

(Read the complete Perdue and Ossoff questionnaires, along with many others on JI’s interactive election map.)

Perdue did not mention the ad in his responses to the JI questionnaire, which includes a question asking candidates whether they believe there is a concerning rise of antisemitism, including in their own party.

“I’ve been a friend of Israel and the Jewish community since I was very young,” the senator averred. “Since I got to the U.S. Senate, I’ve made fighting antisemitism and all forms of bigotry a top priority. Unfortunately, we saw this issue at the forefront in 2017 after a string of bomb threats at Jewish Community Centers across the country. That was unacceptable, and I worked with national security officials in the Trump administration to make sure there would be a long-term strategy to protect these JCCs and other places of worship.”

For his part, Ossoff also chose to not directly address Perdue’s controversial ad in responding to JI’s questionnaire, despite his previous caustic statement directed at the incumbent.

“Sectarianism and racism often increase at moments of great social, economic, and political stress — especially when dangerous political demagogues like Donald Trump deliberately inflame mistrust, resentment, and hatred to gain power,” Ossoff told JI. “Racism, anti-Semitism, and xenophobia have increased in America as President Trump has deliberately pitted Americans against Americans, stirring up conflict within our society rather than uniting us to move forward together as one people.”

But Ossoff’s answer could also have been regarded as an implicit critique of Perdue’s reelection tactics. “I learned about public and political leadership from my mentor, Congressman John Lewis, who taught me to focus on our shared humanity above our racial, religious and cultural differences,” Ossoff continued, referring to the Georgia representative and civil rights leader who endorsed Ossoff before his death on July 17.

“My state, our country and all humanity will only achieve our full potential and build the Beloved Community [a term coined by Lewis] by recognizing that we are all in this together, that our interests are aligned and that hatred, prejudice and discrimination only hold us back.”

Despite the tension between the two candidates, both emphasized their support for a two-state solution to the Israeli-Palestinian conflict.

“Any peace deal should protect the political freedom and human rights of all people in the region and ensure Israel’s security as a homeland for the Jewish people without threat of terrorism or invasion,” Ossoff declared. “The aim of the peace process should be secure and peaceful coexistence, political freedom and prosperity for people of all faiths and nationalities in the Middle East.”

“Obviously there is no simple fix but a two-state solution would be the best outcome for both sides,” Perdue told JI. “However, that won’t happen unless the Palestinians are willing to come to the table, negotiate in good faith and cut ties with terrorist groups like Hamas and Hezbollah. The Palestinian Authority has to end their practice of providing stipends for known terrorists. It’s ridiculous and the reason I support the Taylor Force Act. We’ve got to make sure the United States isn’t sending foreign aid until these payments end. Israel has made it clear that they are open to living in peace with the Palestinians. You’ve seen a willingness by Israel to begin negotiations. The Palestinians must do the same in order to solve this issue.”

Perdue and Ossoff also both expressed their commitment to ensuring that Israel maintains its security edge in the Middle East.

“The special relationship between the U.S. and Israel is deeply rooted and strategically important to both countries, but it cannot be taken for granted,” Ossoff told JI. “Security cooperation, trade and cultural ties enrich and strengthen both countries. The U.S. Congress, with strong bipartisan support, should play an essential role in maintaining and strengthening healthy and open relations between the U.S. and Israel.”

“The U.S.-Israel relationship is both special and strategic,” Perdue said, while noting that his first foreign trip as a senator was to Israel. “It is special because we share the common values of freedom and democracy, and it’s strategic because Israel is America’s strongest ally in the Middle East.”

“President Trump has shown that Israel is and will continue to be a priority,” Perdue added. “By moving our U.S. Embassy to Jerusalem, the president recognized the historic and modern reality that Jerusalem is the center for the Jewish people and all parts of Israeli government. Jerusalem is unquestionably Israel’s capital.”

Still, Perdue and Ossoff differ when it comes to the Iran nuclear deal, known as the Joint Comprehensive Plan of Action (JCPOA).

Perdue supports Trump’s decision to pull out of the agreement. “President Obama’s Iran deal was an unmitigated disaster,” he told JI. “It’s very clear that the Obama-Biden Administration’s weak foreign policy only emboldened Iran and made the world less safe. Trusting Iran to change was not only naive, but it also created a national security risk for our ally Israel.”

“I opposed the Trump administration’s unilateral U.S. withdrawal from the JCPOA,” he added. “In the Senate, I will support U.S. participation in an agreement that prevents Iran from developing nuclear weapons, whether based on the JCPOA, another multilateral agreement or a desperately needed new global nuclear arms reduction and nonproliferation treaty.”

Ossoff, who narrowly lost a 2017 congressional bid, is hoping he can best Perdue in November’s election as the Democrats are strategizing to flip the Senate. The Cook Political Report has rated the race a “toss-up.”